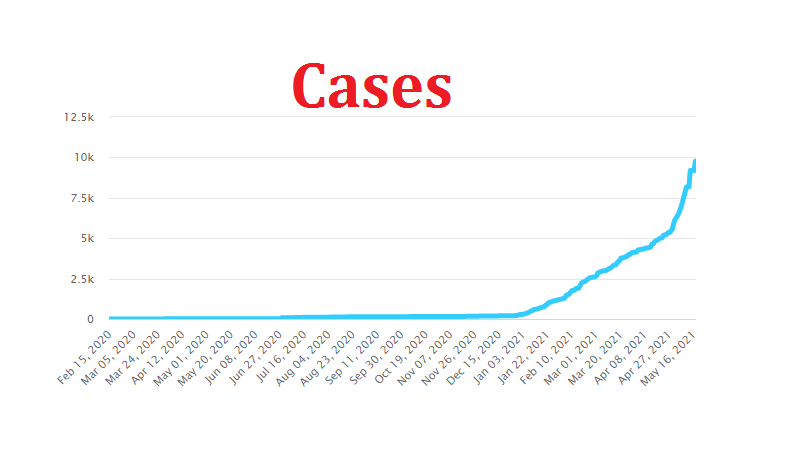 The most-vaccinated place on Earth shows the rest of us what we can expect - and it's spiraling out of control with new Covid cases and deaths! The country of Seychelles can offer no reasonable explanation for their sudden tsunami of infections, and has no plan for dealing with it other than to push more doses of vaccine into frightened citizens. Here are their latest numbers:

Seychelles is 68.5% vaccinated - the highest anywhere - and everybody who wants it has got it. Most people got Sinopharm or AstraZeneca.

Their 100,000 citizens had little trouble with the first year of the pandemic, but in January the vaccination effort began, and the problems arose. As you can see, both cases and deaths exploded at the same time:

According to Seychelles health ministry, "just under two thirds of those [newly infected] are either unvaccinated or have only had one dose, and the rest have had two doses". In other words:

Wow, 35% of new infections are people who have had TWO doses! This matches what we were told in a press release a few days ago, which was "about two thirds who test positive for Covid-19 are not fully vaccinated".

We aren't told exactly what portion of new infections are people who have had one dose, but it can be estimated.

We do know that 68.5% of the general population has had at least 1 dose*. If about half has had 1 dose (and the other has had 2), that would be about 34%. We know 35% of new infections right now are people with two doses - the same as in the general population! New infections are spread roughly evenly across people with 0, 1, or 2 doses - in other words, "vaccination" has essentially no impact on infection.

(*NOTE: This leaves 31.5% of the population completely unvaccinated. Fascinating! The most-vaccinated country, which has had more vaccines than it can use for a while now, did not even reach 70% injected! The USA and Canada are slowing down after reaching 50%, so it appears only about 2 of every 3 humans will comply - very interesting.)

But what about deaths? We've been told that at the very least, these "vaccines" prevent deaths...

Unfortunately, that isn't what they're seeing in Seychelles. They had infections, but NO deaths, until they started to inject these vaccines in January. Now, 35 are dead, and about 1 more dies every day, with no sign of slowing.

"What more can we do?" is the cry from a heavily-vaccinated and fully-locked-down populace. Officials are discussing giving out a 3rd dose of the "vaccines", and upping pressure on those who have yet to accept the shots. They're also discussing adding another technique, contact tracing, which has also failed to contain the virus everywhere else in the world it has been tried. Essentially, they're at the end of their rope, with nobody coming to save them. Experts and officials at the WHO just offer more doses.

So if these vaccines aren't effective in any way, what exactly is the "carrot" being dangled to get anyone else to take them?

Today, CNN announced the "digital Green Pass" coming to smart devices across the Western world any day, available to people who have taken the vaccine.

And what's so good about a Green Pass? Those who have it don't have to wear a mask in public!

So if you take the ineffective and unsafe "vaccine", and the rights-destroying Green Pass on your privacy-destroying smart phone, you can legally expose your face around other humans. Sure, you may get a $100 savings bond (government IOU), a couple lite beers, and some glazed donuts, but the main draw is the privilege to not mask.

Myself, I've never worn a mask, and never avoided going about my community as I always have. It hasn't been easy, convenient, or fun, but I do it anyway because I know masks don't work against viruses, and merely signal submission and obedience. So if not having to wear a mask is the only upside to taking the "vaccine", I'm just going to say no thanks.

My guess is that something is coming around the corner to deal with logical and informed citizens like you and I, from Seychelles to Canada to Japan to Ireland to India to USA. 2 out of 3 humans isn't a clear majority - and they might not even get that! Some new source of fear is going to be needed if they're going to force this technocratic agenda through. Until then, congratulations on staying alive, unmodified, and unmuzzled. We are the Resistance!

We all have our opinion. Mine is only a retard takes a untested vaccine.. well any vaccine really