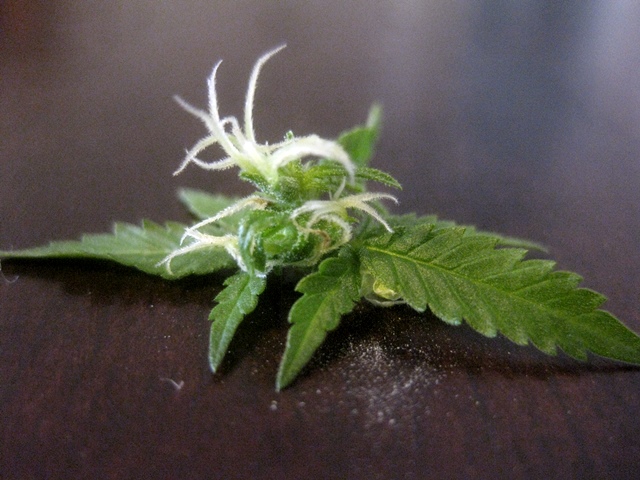 Here's a post topic you won't see often - hermaphroditic cannabis plants! What are they, why do they happen, and what to do about them?!

Plant genetics is a pretty huge topic. Even someone with a full masters degree in biology (I only finished half of mine) would need to write a lengthy and detailed post to begin to cover it. Also, this is my first time personally encountering it, so I'm learning as I go. I'll keep this one more concise, and stick mainly to layman's terminology. If I'm wrong, I welcome your correction.

That's a cannabis flower I picked off one of my plants this morning. Notice the female flower parts (white pistils "hairs" on the upper left) and the male flower parts (yellow stamens "bananas" on the lower right). It's hermaphroditic (has both male and female structures). You can also see pollen on the table. There are more photos (and a video clip) of these flowers coming up.

First off, hermaphrodites aren't 'trans'. They aren't male plants trapped in female plant bodies (or visa versa). Cannabis 'hermies' (for short) are simply female plants that also have some male parts. Nature does this sometimes, in times of hardship, to keep a population alive for another season. For example, females that don't get pollinated by a male plant, if left late in the season, may produce a few pollen sacs, to provide a way for the female parts of the plant to produce seeds. Other nearby plants may also be wind-pollinated by this pollen.

Other reasons plants can 'go hermie' is if they're stressed out, like their light schedule becomes messed up, or the temperature gets too hot. In a way, you can think of it as a plant illness, that triggers due to things that happen to the plant, a bit like an autoimmune condition in a mammal. Stress can flare it up, physical injuries can bring it on, and advanced age can also trigger it. The analogy continues, because just like humans and autoimmune illness, there's a genetic component to plants going hermaphroditic. Essentially, the condition runs in their family genes. Some strains almost never go hermie, and other strains do it at the drop of a hat.

That takes the mystique out of it, and hopefully a bit of the stigma. Hermaphrodite plants are pretty darn normal, and healthy, as far as nature is concerned.

The issues come about only for us gardeners, who aren't just trying to continue the species - we're trying to steer its genetics a certain way, and produce individuals of extremely high level of health and quality. We want high cannabinoid levels in our buds, and we want buds that don't have seeds to be picked out before smoking/vaping.

Females that produce seeds generally aren't wanted in indoor cannabis gardens like mine, because plants that put energy into seeds put less energy into making trichomes, which are the tiny clear stalks all over cannabis buds that contain cannabinoids (and terpenes). It's trichomes we're after - that's where the magic is! So the more seeds we're making, the less potent our bud is going to be. Not to mention, all those seeds that need to be sorted out, which is a hassle. In short, we're growing sensimillia (aka kind, aka top shelf, aka fire, aka dank)!

I found a couple male pollen sacs on my female cannabis plant today! One of them is underneath this small flower bud - the yellowish structure on the right side. Surprise! A hermie!

When a cannabis female goes hermaphroditic (through a combination of genetic and/or environmental factors), the pollen produced causes seed formation, just like if a male plant were to have supplied the pollen. Now you see why this makes surprise hermies a real problem for gardeners like me, trying to maximize cannabinoid production in a small indoor garden area. I'm literally keeping cancer at bay with this medicine, so I'm not foolin' around here, I need to do what it takes to make this work. I put 100+ hours into this garden (and posting about it) so far, and plan to see it completed.

The same flower shown in the first photo (thumbnail pic), but from the other side, showing a male pollen sac hanging under the flower. The sac is open and the stamens have released their pollen.

As with most things, hermaphroditic cannabis plants have some pros and cons.

One interesting outcome of hermies is the seeds produced will all be female! This is one way growers produce 'feminized' seeds. By stressing out a normal female plant, either with a silver compound sprayed on the flowers, or just letting it get old, male parts will form. The pollen produced only contributes female (X) chromosomes, because it comes from a female plant. When this pollen hits any female pistil, the DNA combines, producing an offspring (seed) that can only be female! Essentially, it's a way for a female to pollinate another female (or herself). In nature, as summer fades, female plants that haven't received any pollen (ie: old spinsters) find a way to 'come back and try again' in the spring.

S3, my beautiful hermaphrodite. She's the largest and healthiest plant of the 4, and my only Steem OG. I only found 2 male pollen sacs so far, and they've been removed. The garden is probably 99% pollinated now, the damage done. All I can do is try to finish up this crop, get as much medicine as I can from it, and start again fresh.

What's the problem this time?

Unfortunately, as I mentioned above, hermaphroditism runs in families - it's in the genetics. Hermies are commonly found on hybrids, especially strains that haven't been totally stabilized. Some strains are so susceptible to it, all it takes is any fluctuation, and hermies appear.

Feminized seeds from hermaphrodite pollen are awesome - IF the pollen came from a female that produced it because she was stressed or old, NOT because it runs in her family genes. Sadly for me, S3 wasn't old or stressed in any way, and appears to have produced the male parts because her genetics aren't very stable.

Now, I'm not saying Steem OG always goes this way, because I've grown it before and didn't have this issue, but I think it's important that everyone with these genetics be aware they are prone to hermaphroditism. Please, protect your gardens (and those nearby, if you're growing outdoors). Perhaps the genetics can be stabilized in the future, if someone feels strongly enough about the strain to take it on. I'm not capable of that yet, and so my adventures with Steem OG are probably almost over.

I do still look forward to seeing how the flowers finish up, despite the unwanted pregnancies, and what I get in the way of seeds. It's too bad they probably aren't going to be useful for anything, but this has been a valuable learning experience. I hope you got something out of it as well!

S3's hermaphroditic flower with pistils, stamen, and pollen. @MediKatie ate it after the photo was taken.

Here she is, back in the garden with her MK Ultra girlfriends, like nothing ever happened:

Surprise hermies aren't a good thing, but if you understand how they happen and what your options are, you can still come out okay.

Thanks very much for the manual curation, guys! Happy you liked it :)

Sorry about your trans plants.

As tragic as this topic is....... it's important!
Upvoted and resteemed.