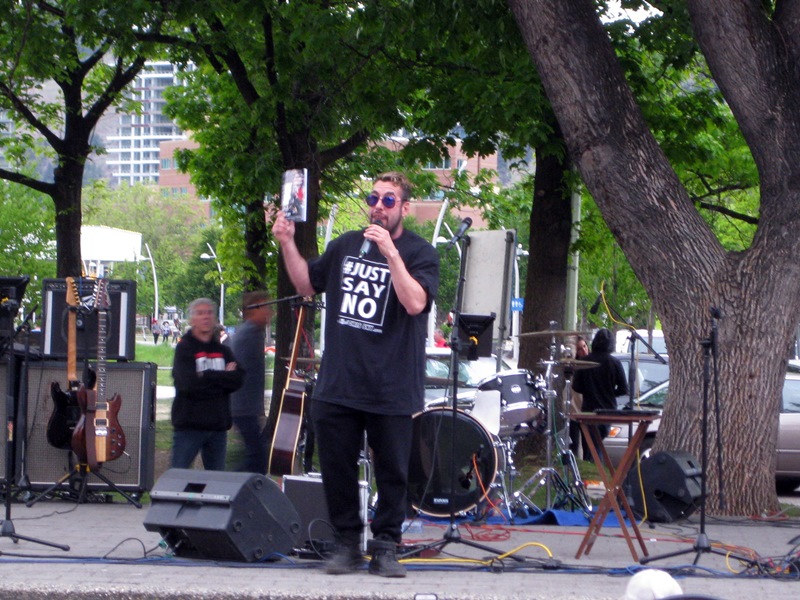 Chris Sky is a freedom fighter here in Canada who defies the lockdowns and travels the country speaking at rallies. I saw him speak in front of 4000+ a few weeks ago, and again this evening with 1500+ other unmasked undistanced free-range humans!

Chris was fresh off new arrests and bogus charges, and had driven through the night from the other side of the continent to get to the rally. Now he's going from Vancouver (West coast) right back across, speaking at one city every evening. The state is doing what it can to discredit and disempower his efforts.

His book "Just Say No" was banned on Amazon before it could even begin selling. (He was distributing them for $20 each to spread the word and fund his journey.) His house has been raided, he's on the no-fly list, and he has been deplatformed online.

Alex the Comic was on hand for some laughs!

The crowd wasn't huge, but it was more people than I'd seen together (other than the last Kelowna rally) in 2 years. The vibe was positive and powerful. People are weary, but they're ready for a long battle if that's what it takes. Canadians aren't going to give up our freedoms as easily as others assume!

Also, we sang and danced.

I saw this info bomb:

Indeed! Cracks against the narrative (and evil plan) are appearing everywhere, from all angles.

It felt great to be with so many others who aren't under the Covid spell. I wish my wife @MediKatie had been able to be there as well, she would have enjoyed it. The sense that I wasn't alone in my beliefs was relieving, and to have so many other people who really identified with what I was going through... it was great.

This is what they DON'T want. For us to realize there are others out there, in fact all around, just like us! We're not crazy, we're not alone, and we're not powerless. It's absolutely true that it only takes a dedicated few to change the world. The dedicated few are here, they're motivated, and they're ready to do what needs to be done!

Power to the people!