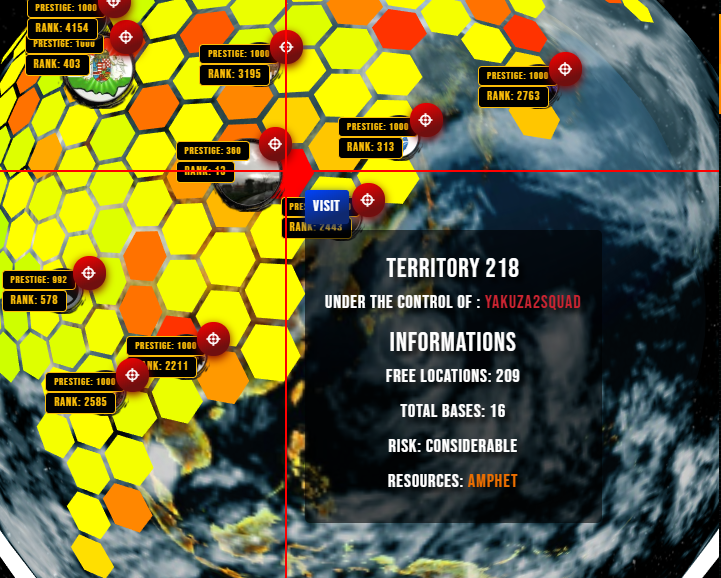 Few weeks without annoucement have passed but we have been able to develop many planned features to make DrugWars even better than ever.

The map is now giving lots of information not only about territories, resources and gang who owns them, but it also allows to instantly load a bunch of opponents randomly, showing their rank and their prestige while giving a quick way to spy and attack them. It still misses interactions at our eyes and we are working to make it so that you can just sit and watch the DW map to be entertained.

While the last version (0.5) and its iterations improved the game such as the addition of features like jobs, we had some issues with the fight system itself as many of you may have noticed. Since the last patch where units are fighting in cluster we had no issue anymore with the game and our servers, Alleluja. But let's talk a bit more about the fight later in this post.

One of the most important information in this post, is probably the actual economic situation of the game and we really believe to be in a good direction.

At the swap of FUTURE to DWD tokens we have dropped nearly 2.2M tokens to our players.
Now, a bit than one month later, the total supply of Drugwars is decreasing day per day and we are glad to say that we have burnt a total of 167k+ DWD tokens or more precisely around 4k per day since the launch.

Our plan is to not activate the staking of DWD until we have distributed 40-50% of the total DWD supply. If players continue to burn tokens at this rate, the staking may happen only in few years but of course we will not let that happen and trust that we can achieve to sell, distribute and/or burn at least 3-4M tokens in the coming years, which would have for effect to reduce the total supply to nearly 5-6M, with nearly 40-50% in the hands of the players and activating the staking of your DWD tokens (wtithout staking they would all burn in few years :) ).

If you havent already read it we invite you to take a look at this post https://goldvoice.club/steem/@solarwarrior/dwd-drugwars-dollars-new-data-points made by @solarwarrior which gives more details about the situation and the design of our economic system and its inflation. Thanks to him for bringing some light into it.

For a total transparency, our team did not take any fees on any purchases made with DWD. We are planning to introduce fees after the burn of the first million (after that we will take fees from the tokens burnt by players). Before that the team will not take any fees and will focus to manage the whole cost with the liquid Steem that we have on DrugWars/Fundition. Of course we will keep on powering up some Steem as we already did since the start, so we can continue to upvote your fights and/or relevant posts about DrugWars.

We are also going to introduce ads, so don’t be surprised if you start to see some ads running in the game. To be fair to our community, 50% of the revenues generated with the ads will be used to buy back tokens, to create events or to burn them. Unfortunately our project does not permit to work with all adsell platform, but we will make the best compromise between relevant ads and a platform which guarantee some stable income to the game.

We may also introduce a support option later to remove the ads so you can still enjoy the game without being annoyed with ads. And remember you will be also able to use the brave browser to avoid the ads and maybe support DrugWars with it in the same time.

Before the introduction of the new resource system, the government will knock the door of players who have been inactive for a long time and send them a squad of NPC units equal to their army. This will be a one time event, but will turn into a regular one with a different form. Why the purge you ask? Because many inactive players still have their units ingame, and while players can’t attack them, their units are still taken into account for the total population calculation. So we are fixing it and that will probably increase the reward that you earn for fighting. So if you were inactive in DrugWars and want to keep your units, we suggest you to login back asap. The government will not wait for you and will be at your doors at the end of the month, more precisely on the 30th september at midnight UTC.

We are going to change the upvote system, the pantheon will still help you to increase the upvotes but we will change the algorithm so the system will give less vote to empty fight.

As you’ve noticed 15 new resources are being implemented to the game.

They will be used to acquire/upgrade buildings and/or units. Yes your existent units will also cost another resources. Since you are paid with crypto, they will be too!

Example of one of the new resources. Not functionnal yet.

Those resources will be harder to produce/obtain since they are always tied to the territory and need a specific upgrade to be produced. So a player with a maximum of 5 bases will be only able to produce ⅓ of the different available resources. Making each account slightly different depending on where the player chose to locate them.
For more realism some resources are only available on certain continent and are produced at different rates taken from real world (well no worry you won’t need to wait 3 months to obtain some DW-MARI).

The introduction of those resources does not make DrugWars the only game with a lot of tokens and a free market but also a game where the trades between players will become a necessity and so have a big place.

Since we are going to have now 16 different tokens to trade ingame it would be difficult for our users to go on SteemEngine to trade them and also it will be a massive waste of time. That’s why the DrugWars team is integrating now its own Exchange which will permit you to use steemengine without leaving the game. We will also make it possible to exchange DWD for the new resources.

We have introduced the prestige at the start of the preseason without too much details about it, it’s working fine in some cases but it’s not perfect and we are improving it to have it ready by the end of the month.
In addition you should also see in advance an estimation of how much reputation you will gain or lose by doing an action.

DrugWars is already huge in variety of actions that you can make ingame but let's be honest our fight system is still not enough elaborated to give players a way to take advantage of their army/brain capacities. As we’ve expected and planned since the start, we are changing it with a new fight system including a new gameplay similar to chess.

Of course if you don’t want to play the fight, you will be able to run it automatically and the DrugWars AI will play for you.

This change was definitely needed for the upcoming features including the cards. So unfortunately you might not see too much work on the current fight system, since it will be deprecated after the release of the new system. We are sorry for that and we are aware that many of you are confused with the actual system but we’d rather focus on consistent feature and work only on the new system than to work on something that will be gone.

Coveted by all, desired by the biggest Druglords... and always delayed, we have pushed a bit back the release of our cards to the 0.7, but that makes sense in the way that we still want to not rush the development, and finish all the core features of a totally new game, instead of having to sell unfinished/imbalanced items. So it takes time but we are improving all the parts to welcome the cards and make good use of them in the whole game.

While the government in DrugWars is only getting attacked, it was certainly not going to be like that forever. So all Druglords can expect to see the government coming to take all the illegal stuff they are producing with their empire.

With the help of a steemian, @cryptkeeper17 the team will implement a quest system which give you randomly a task. Tasks are made by a series of seven for a week. So each day you will obtain a higher level of task (and so a higher reward) until you finish the 7th day task, which will permit you to obtain the ultimate reward! A pack of DW cards.
Remember that you can also contribute to the game, just contact our team on discord with your specialization and/or what you can bring to the game.

This feature is now already present ingame, but it still requires some writing works and more various data to give a real feel of a newspaper. We really want to rework it and make it interesting to read the latest news about what’s happening in the DW world.

Again we would like to thank all our players for their patience and understanding while the early access is in progress and invite them to use our discord at https://discord.me/drugwars to report any issues they encounter.