Can you solve this easy puzzle? [VIDEO] 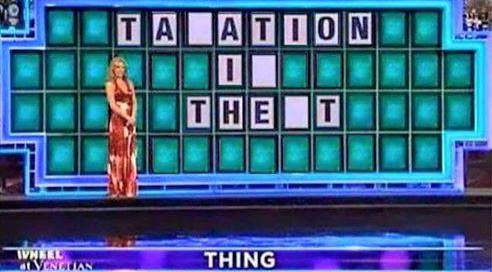 If you were ever educated in a state school, you’ve been misguided. A child can understand that robbers are bad, but your so-called founding father said taxes are as sure as death, so you’ve accepted both as inevitable?

The fact is, because you were born somewhere, the gang with the most guns in your area (The State) demands you give them money. They likely siphon it directly from your employer every time you’re paid.

Of course, deciding how much of your earnings you’re allowed to keep before you even touch it, that’s not enough for the powers that shouldn’t be. They also steal from you whenever you make a purchase, have fun, or do basically anything.

Yet this is fine, some say, because “muh roads” and stuff...

The USSA is about 243 years old. For its first 137 years, Muricans had no income tax. Does anyone really believe roads were just invented only 106 years ago?

According to the US Office of Management and Budget, the individual income tax has been the largest single source of “federal revenue” since 1950, but it amounts to 48% of the total (35% comes from payroll taxes and another 9% from corporate income taxes).

It’s no coincidence that the Federal Reserve System (aka The Creature from Jekyll Island) was also created in 1913, the same year the IRS began enforcing income tax.

This widespread extortion racket has been stealthily imposed at an ever growing rate and it is astounding so few people are aware of the profound enslavement that entails.

In my recent ‘walk and talk’ vlog from a beautiful location in Milan, Italy, I explore the ‘taxation is theft’ debate and break down how it all came to be.

Most importantly, while taxes are obviously not paid voluntarily, there are plenty of ways to avoid the thievery, which I also covered in the video below.

Cryptocurrency is a major part of the solutions, but there’s a lot more to it!

You’re being extorted. What are you going to do about it?

Check out the full video:

Many people still believe society needs this ‘modern’ slavery system in order to provide “public services” like police, courts, and “national defense” but those statists are wrong and don’t understand economics or human action.

Market competition always improves the quality of products and services. It also lowers costs. The difference between a state monopoly forcing you to pay for something and entrepreneurs voluntarily competing to earn your business is night and day.

Fortunately, the world is *evolving* beyond coercion and centralized control, beyond the systemic oppression of politicians and banksters.

Those of us on the bleeding edge of the real progressive movement pushing society forward towards more peace, love, and individual freedom, we gather together each February in Acapulco, Mexico for The World’s Premier Liberty Event.

Learn all about **Anarchapulco 2020** & get tickets at the lowest price: https://anarchapulco.com