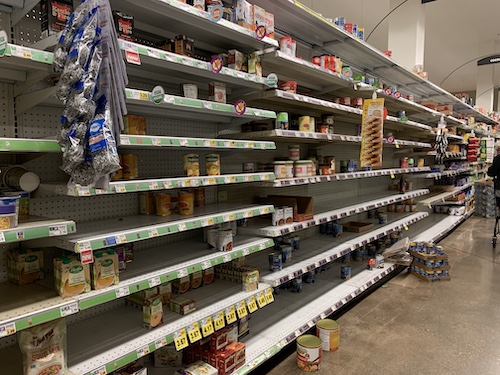 Yesterday morning began like any other day. I was a little concerned due to the reports of the Wuhan Corona Virus making it's way through some small sector of the US population, but it still seemed a little distant. Life was moving forward as usual... mostly.
Then... yesterday came. My wife received a text from her brother. His talent agent friend called him and told him to be prepared for the worst. He was getting word from on high in his agency that they had been speaking to government officials and that a lockdown was probable, accompaied with the photo above. This time, it wasn't just toilet paper being gobbled up by people, it was food.

Soon after, word began spreading that sports industries were closing, Tom Hanks had been infected and many, many film and TV productions were being suspended all over the world.

I couldn't believe it. World War Z was finally upon us. Finally...

Beginning with my sister, I began to call those closest to me to tell them what I had heard and to look at buying not toilet paper or paper towels, but food and medicine, before what was happening in LA, spread to the rest of California where the bulk of my friends and family reside.

My wife and I planned a list of items to get at the store, but it wasn't possible to leave at the moment, so I had to wait until office hours were over. Once work was over, I immediately went to the grocery store. At first I drove by a chain called Trader Joes. Very popular out here in LA. Through the windows, I could see that the shelves were empty. A friend of mine reported to me earlier that their entire frozen section was empty.

So I continued onto a very large chain, Ralph's, and this was what I found. 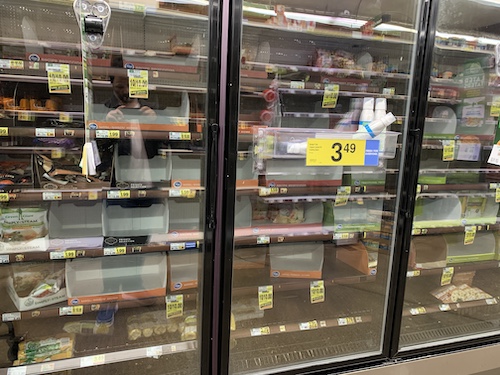 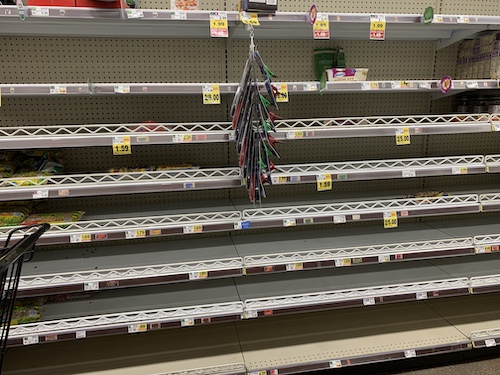 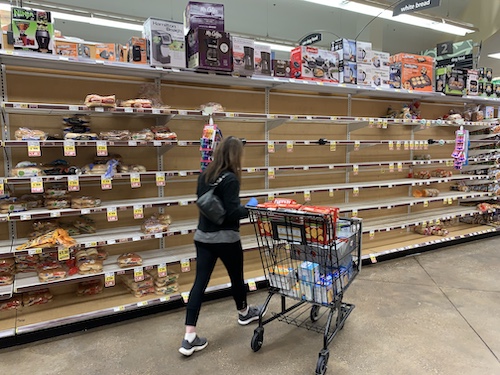 It was bedlam. The parking lot was full. Face masks abound. There were no frozen or canned vegetables left. 99% of pasta and bread were gone. There were no eggs left. NONE. Not even the pre-scrambled, cartoned eggs. Dried noodles like ramen were 100% gone. Most milk, almond milk and much of the meat was gone. Fresh produce was about 50% gone. People were buying frozen burritos by the case. Frozen pizzas were largely out as well.

It was one of the most disconcerting scenes I have ever lived through. Nobody was sick. There were no zombies, but man if it didn't feel like the prelude to a zombie apocalypse, you could have fooled me!

Thankfully, I was able to get enough staples - oddly the fortified pastas and rice were available (I got the last of them) and all the regular stuff had been consumed already. In a way I felt fortunate. Protein and vitamin infused pasta and golden rice seemed like the perfect emergency supplies.

I'm confident that humanity will survive, but for a second there, shopping amongst fellow, mildly panicked people, I thought that it could be the beginning of the end.

I am the kind of person who is always just a touch paranoid and already had some supplies on hand for a few days worth of hiding in our apartment, but now we're ready for something a bit more substantial. Maybe we'll turn into the next Italy, where most activity has been restrained, but maybe not.

All I do know for sure is that it's good to be prepared. So get out there now before the virus and the panic spreads to your town and be prepared.

Stay safe, wash your hands and stay calm. Don't buy reams of toilet paper and towels. Get food and medicine. If you're in a place with bad municipal water, get some of that too. You'll need at least one gallon per person, per day.

Continue the discussion on Distant Signal's forum's. Powered by Steem!

CHECK OUT THE TEAR!

The Tear is my cosmic horror short film and cinematic universe.
http://bit.ly/tearlinks

If you want to know who I am and what Distant Signal is, check this out. It's sort of a manifesto. The TL;DR is that I've won an award for producing, make a lot of reality TV, live in LA and think that artist and media incentives are misaligned and serve large corporations and not independent artists. In 2019 the goal is to produce the short horror film, Changelings, the world of that story and to build a community of filmmakers that are enthusiastic about filmmaking and crypto currency.

Question from the Bible, Who can lead me to heaven?