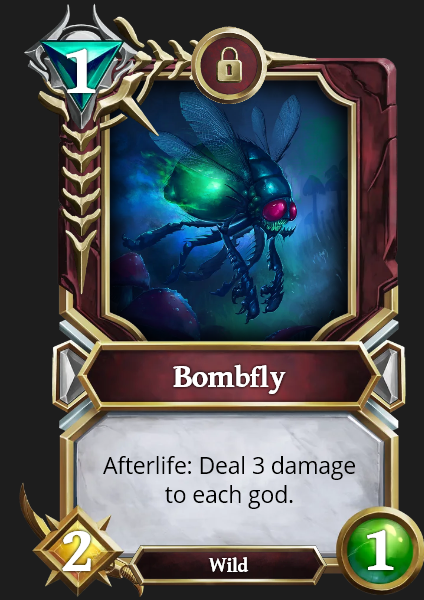 When I was new at playing card games I would fill up a deck with everything that I considered a "good card" but that's not enough when it comes to playing against other people. You need to plan your deck ahead of time with a strategy. Here are some of the most common deck archetypes in card games.

An aggro deck is one of the fastest. It aims to overwhelm the enemy with as many cards that have high attack for low mana cost, or cards that deal damage directly to the enemy player.

Bombfly is a standard card you would find in an aggro deck. It was recently nerfed to have 2 attack instead of 3 because it was so good at it's job. In general it doesn't matter if you deal damage to your God as well since very few decks would be able to race down an aggro deck. Aside from another aggro deck of course.

The opposite of an aggro deck is a control deck. It aims to stall things out until it can play very high mana cost cards. The Magic god has many cards that are good examples of what would be in a control type of deck.

One of the most important things for a control deck is strong removal. You can have single target removal like Ratify, and board clears like Astric Implosion. Both of them target different kinds of decks. Single target removal would be used in the late game when the enemy plays a very strong creature that you want to remove immediately, and board clears are good when the enemy is trying to rush you down like in an aggro deck that has a board filled with creatures.

When you're done clearing the enemy's biggest threats then you can play some of your own! Something like Tome Golem is ideal for that because it not only has high stats but it also draws you plenty of cards.

Vault Vagabond is a very powerful tempo card. It's pretty much guaranteed to get at least 1 attack on the enemy god thanks to hidden and flank. Which means it will draw you one card and let you see what the enemy is going to draw next turn, and it can do that every single turn that it's left alive!

The final archetype is combo. This is when you save up cards to unleash them all at once, where each of the cards is stronger together than by itself.

Using cards like Morgana's Grimoire and Avatar of Magic together can very easily win you the game. Of course that's considering you can pull off the combo in the first place.