Stick by What You Believe In! Late Night Notes — Written in Odd Places 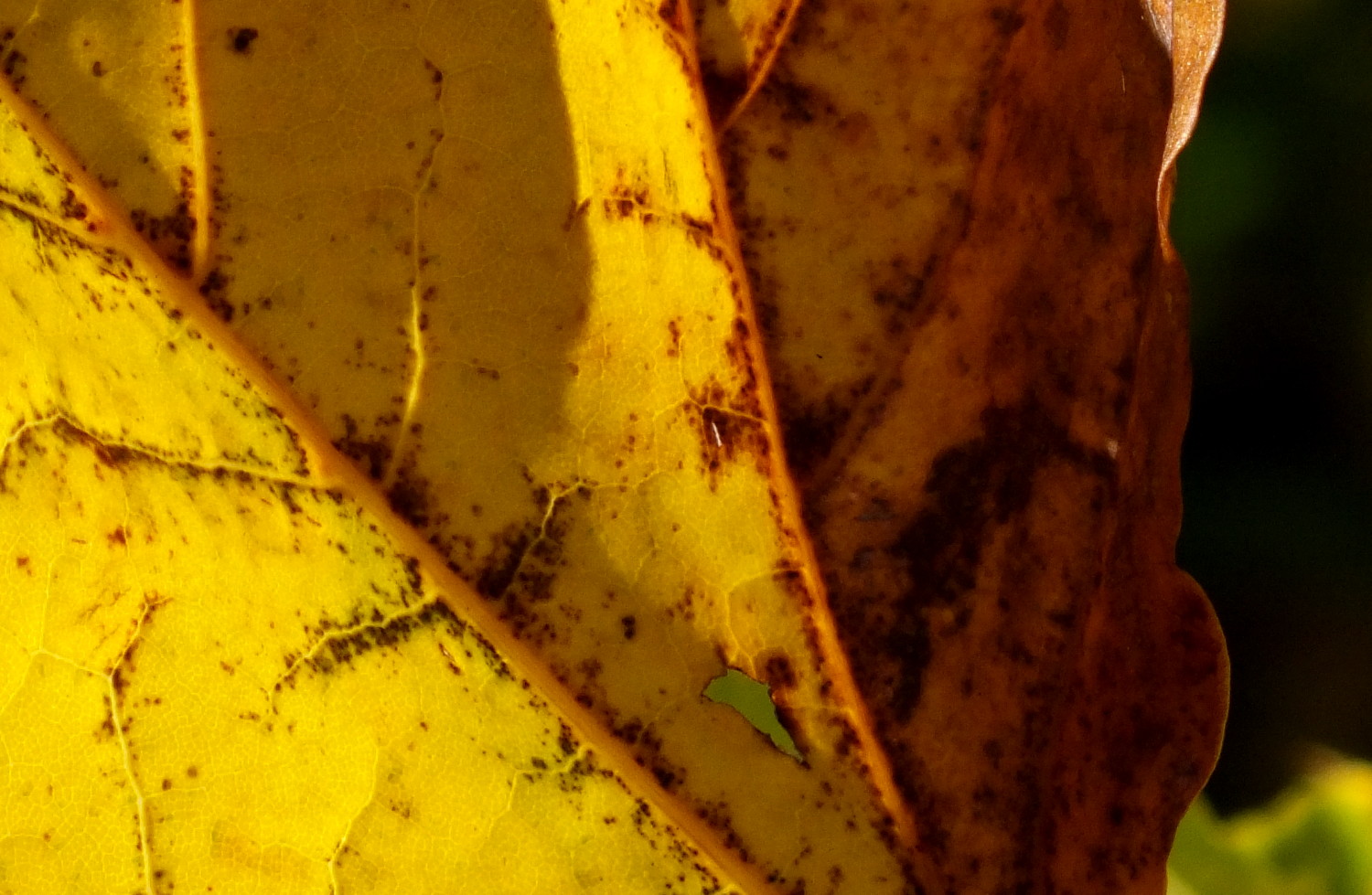 I write notes to myself in many strange locations.

Lately, I've taken to writing notes to myself on my phone as they occur to me, and then emailing them to myself. I like to think it sticks them somewhere out in the ethers where they can percolate for a bit, until I revisit them.

Fall maple leaf in the sun...

They other day, I sent myself a note while sitting in my therapist's waiting room:

Stick By What Your Believe In!

I don't remember whether it was Gandhi or Carl G. Jung who remarked that just because most people are saying or doing something doesn't automatically mean it's the truth or the best thing to do.

When I wrote myself that note, I was thinking about my/our experiences, here in Steemlandia.

It can be difficult — and frustrating — to insist on sticking to your values and ideals, in the face of a large group of people who insist on approaching things from a very different angle than your own.

I came here to blog, almost three years ago. And no matter how much there are fairly dominant forces and individuals around here who just want to milk the system, my interest in being here remains a desire to engage in some form of creative writing and expression.

Flowers in the pot on our deck...

I COULD Have Sold Out...

I could have just thrown in the towel and started creating "content that sells," and mass produced it in such a way as to only worry about maximizing rewards.

Some might even argue that it would have been the smart thing to do. But you know what? The whole "if you can't BEAT 'em, JOIN 'em" truism just hasn't ever sat very well with me.

Not here, not anywhere.

Not trying to come off as "Holier Than Thou," here... and I even talked about this (briefly) with my therapist (no, really!), namely this idea that my values are more important to me than a handful of change.

Are YOUR Personal Values for Sale?

A lot of people live and die by the Mighty Dollar, or the change in their pockets. I don't. And I say that as someone who has — in essence — been homeless and indigent; sleeping on a public bench.

Thankfully, I don't live like that anymore. I was only "on the streets" for a relatively short time, but I have no desire to go back.

Chasing the Almighty Dollar is not one of my values, but neither are vows of poverty. Somewhere, there is a middle way. And that middle way doesn't involve abandoning what I believe in, just because an opportunity to get ahead by applying some good old-fashioned greed presents itself.

My personal values are not for sale!

How about yours? Are you ready to set aside your beliefs when an "opportunity" for gain presents itself? Think about it...

Comments, feedback and other interaction is invited and welcomed! Because — after all — SOCIAL content is about interacting, right? Leave a comment-- share your experiences-- be part of the conversation!

I often think about this as my job is a really shity one and i hate it. I cannot give a clear answer but our microcommunity at steemit is teaching very educating lessons about human behaviour and money:)

I'm self-employed, and for a while my blog here was something I considered my part-time part-time job, because I was actually making close to $100 a week. But those days are long gone... and I realize that I was really not ever here "for the money," that was just a nice bonus, but not my primary motivation.

A lot of people (it seems) just start behaving really badly, as soon as their is money involved.

Yes i agree to that too, when i started i was really happy with all the rewards but soon i realised that what attracted me th most was the interaction with the people.

I think that we are here because we like to be here, rewards are just the bonus as you said:)

i think this message is valuable. pirsig wrote about this in "zen and the art of motorcycle maintenance", a wonderful book if you havent yet read it, when he spoke of quality over quantity; ethics as the base of actions.

i also spoke of this quandary over values to my therapist, and i do believe that there is a small but strong group of steemians who do believe in not selling out. whether that is as a rebellious act to counter the mainstream or as a purposeful decision matters not. eventually the one becomes the other if the value holds.

Ah yes, such a great book! Been a long time since I read it... but some good lessons about life there. It also reminds me of how "character" used to be valued more highly than "personality." These days, we seem to have to be able to sell ourselves in order to get ahead... and that matters more on the scale of succeeding than being and doing our best, and having integrity.

I think just the ability and willingness to stand by our values matters. It's like the truism that just because a significant majority engage in a certain behavior or belief doesn't mean that is the truth or right action. So I stick to my guns of being a blogger... and hope that very "small group of Steemians" will support that ideal.

In recent weeks, I have become quite fond of — and grateful to — the #CreativeCoin crew for trying to maintain a very "clean" operation... there IS a space for authenticity and creativity in the world.

Thanks for the support — appreciate it.

Sad that so many people give in to fanaticism of ideas and miss the middle way altogether.

Yes, I have always found that trend rather sad, too... and many seem to get into fights as soon as anyone views the world in a way that is even slightly different from their own.

@denmarkguy You have received a 100% upvote from @steemguardian because this post did not use any bidbots and you have not used bidbots in the last 30 days!

Thanks for the support! I don't use bidbots... just don't "get" their purpose.

I went to a primary school whose motto on the badge under two galloping horses (don't understand the significance even now) was
Loyalty, Honour, Truth.
My sisters and I (retirement age) still sing the school song with our hands cupped in front of our belly buttons with rolling eyes BUT we mean the words as we sing...........
Loyalty to family, country and our intrinsic values
Honour to people who have influenced me especially those who have stood up for their principles
Truth...........always. It does set me free.