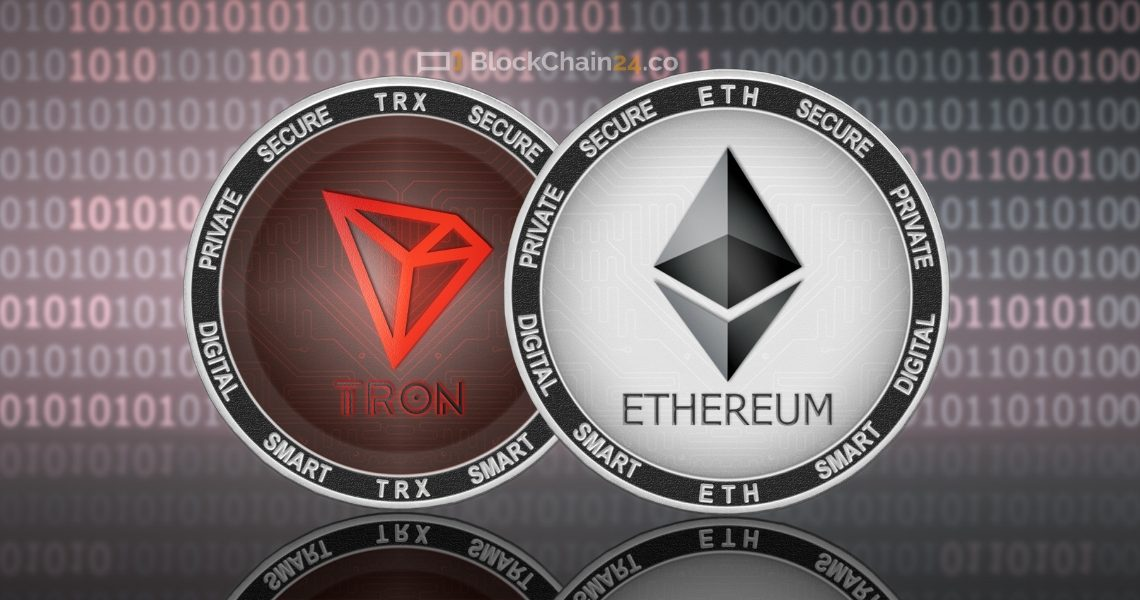 Hello everybody,
My thanks to the CryptoAcademyCommunity for the good work done. To our new Professor @alphafx, I say congratulations on your appointment. That you for the great lecture delivered on blockchain platforms. It was really understandable. Below is my discussion on two of the best blockchain networks; Tron and Ethereum networks

INTRODUCTION TO BLOCKCHAIN TECHNOLOGY
Blockchain Technology is generally a structural medium of storage that keeps transactional records in a medium called blocks of the public in a database system known as a chain in a connected network through nodes. This storage medium is known as a digital ledger.

A Blockchain is simply a record of transactions across a wide range of computers in a digitized manner. It takes individual records called blocks and joins them together as a unit called a chain. It records transactions associated with cryptocurrencies like Litecoin. Blockchain enables smart currencies to execute when certain conditions are put in place. A Blockchain platform is a platform that enables the growth and development of blockchain-related applications. Examples of such platforms are Ethereum, TRONS, Ripple among others.

TRON is a decentralized blockchain-based platform that aspires to create a digital content system globally with distributed technology storage and ensures sharing of digital content cost-effective and simple. In September 2017, TRON was founded in Singapore by the Tron Foundation, a non-profit organization. Justin Sun is its CEO and leads the organization.

TRON aims to bridge the gap between content creators and consumers by getting rid of the middleman. This brings about a favorable condition for both parties. TRON uses Tronix(TRX) as its crypto currency. Consumers can use Tronix to purchase content they want to access. When this is done the coins are paid into the content creator's account which could be used to pay for blockchain services rendered.

ETHEREUM is a digital platform that enables individuals to create and develop a wide range of decentralized applications. It is not supervised by the government in its operations and activities. Vitalik Buterin is the brain behind the existence of Ethereum. In 2015 with the aid of co-founders, Vitalik Buterin launched the first version of the Ethereum platform. It operates as open software platform running on the block chain technology. It is similar to bitcoin as it is a record of transaction history. The Ethereum platform creates room for developers to deploy and grow decentralized applications('dApps').

Dapps are simply open-source software that use block chain technology to operate. Smart contracts aid the creation of Dapps. The tokens of Ethereum are the ether. Ethereum provides the development of smart contracts which facilitates the exchange of assets between two parties. Another feature of the ethereum block chain is the Ethereum Virtual Machine (EVM). EVM is the tool which understands the language of smart contracts.

COMPARISON BETWEEN TRON AND ETHEREUM NETWORKS
To begin with, Ethereum is one of the most hack-proof peer-to-peer networks in existence currently. It invested greatly in network security when the DAO hack scandal occurred. This is put in place to avoid future breaches into their system. TRONS too has taken a similar path as the two networks doing well at the mainnet stage. But they are not the same at the development of their third-party dApps. Guidelines are specified as to how to make sure your dApps are secured and there is a good specified documentation with Ethereum as compared to TRONS.

Also, enthusiastic support and a developer environment ensures a decentralized network. The expansion of cryptocurrencies such as Ethereum and TRON is made possible through the support their communities provide to them. TRON has a social rating of 9.6% as compared to Ethereum's 23%. This is because TRON has 490K+ followers on Twitter as well as 70K+ followers on Reddit. While has over 450K followers on Reddit and Twitter respectively. This makes
Ethereum a more mature platform development-wise as compared to TRON.

Both Ethereum and TRON are decentralized blockchain networks that do not entertain third parties. Ethereum creates a globally decentralized network while TRON ensures that third parties have no hands in the digital creators' content. Ethereum has more dApps and nodes on their network than TRON, although they both support deployment and growth of decentralized applications. The existence of more nodes and dApps on Ethereum shows that Ethereum is more decentralized as compared to Tron.

You are most welcome Professor. I really appreciate