The ultimate zoo experience: Beyond Bio-dome 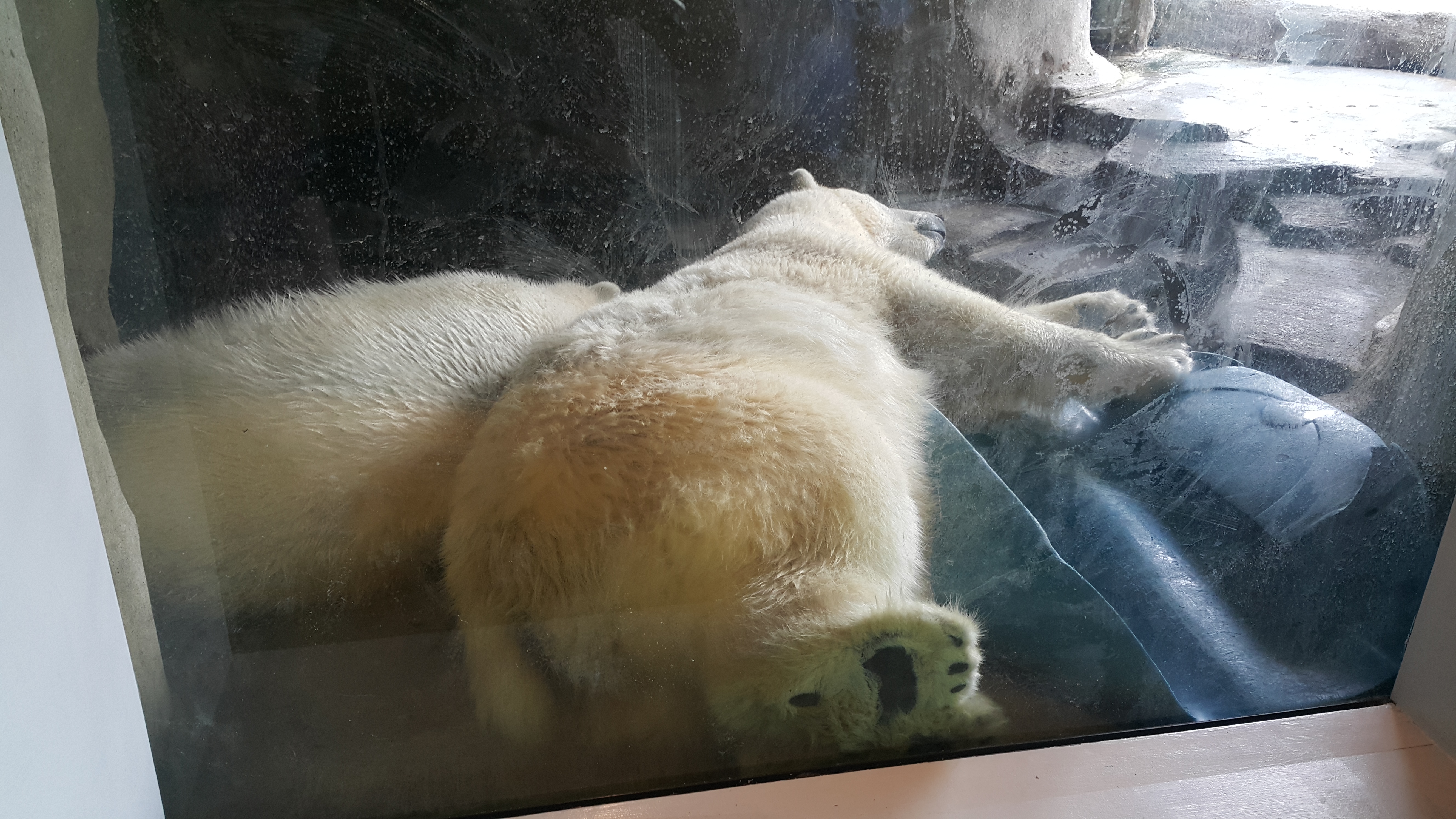 What's up, pussyboi's? I've got something to post today that's pretty different from my normal content. So, get the nipple tassels out and prepare your asshole to be absolutely riveted with a mundane experience, baby. Anyways, a few weeks ago my fiancee and I ended up taking a trip over to the zoo when it was free during the morning and early afternoon, because, Christ on a bike, is the admission to get in otherwise expensive. It definitely was a pretty nice experience though, something I haven't done since I was a wee turbo virgin myself. Today, I just figured I'd share some of the pictures I took with my thoughts on the animals in said pictures. I took a shit load of photos, but I'm only going to include a handful here, because I don't feel pulling down my shorts and laying a fat load of photos onto your face. On the count of me being a civilized, true intellectual.

The first creature we were greeted with after entering the zoo was this pair of polar bears, as you can see, who were too hungover from all the K2 and monster energy they consumed the previous night. These two were truly the champions of spread asshole of the zoo.

After the polar bears we stopped by this small exhibit where there were a bunch of coked up monkeys. I have never seen a more hyper active animal in my life. These golden haired lion tamarin's were so god damn hard to get a photo of that I can only describe them as a being of pure high octane energy. Seriously, I question if the zoo keepers doping them up with bath salts. But, they were pretty cute.

On the opposite end of the coke fiend spectrum is the magnificent Sloth, who was the next stop on our little trek across the zoo. As you can assume, this creature suffers from a rare form of eternal narcolepsy, so he was pretty easy to photograph. If they really wanted to help him be more active, then they should really just build a Starbucks into his cage at this point, fucking idiots. Again, though, pretty cute little animal.

Here we see a group of lemurs recovering after their daily orgy. I have to say, this exhibit was the worst in all of the zoo. But, not because of the animals or zoo or anything like that. But, because of the pudgy middled aged bitch who was in the room with us who was shit talking the lemurs for some god damn reason and sounded like a knuckle dragging troglodyte. Complaining about them being "lazy asses" and "Why don't they just get up and do something. They're suppose to entertain us!" Her name must have been Karen, and she is certainly every retail workers worst nightmare with how self centered and cunty she was.

After getting away from that horrible nightmare of a human being, we stumbled across this wonderful guy. a  Cinereous Vulture. This guy is the alpha chad among birds at our zoo. This will be the only bird you see mean mugging you hard, looking like he's here to beat your ass and take your lunch money. He was definitely my favorite avian exhibit, and I highly recommend you all get one as a pet so it can menacingly stand in the corner waiting for you to slip on a banana peel and die so it can feast on your entrails. What a loving creature.

We made our way to the orangutan exhibit and found this dude sitting there looking like he had given up on life. I thought perhaps he had just played too much Death Stranding, as I could certainly understand why you'd want to die after playing 40-60 hours of the horrible gameplay. Seriously, why didn't Hideo Kojima just make it into a fucking movie, my god.

But, it turns out he was just super concentrated on finding the last bit of food that apparently was stuffed into his pipe bomb before he lit that bitch up and made his grand escape from his exhibit.

And, once you move past the orangutan you'll find yourself face to face with this handsome grandpa. The Gorilla exhibit had some of the dirtiest glass in the place, and I expect it's probably because this guy rubs his ass cheeks all over the glass to spite all the people there who stare at him. I can't say I blame him. Hopefully one day he'll watch enough Rick and Morty to get a high enough IQ to shatter the glass and escape so he can start beating cheeks on all those who came and ogled him.

The last area of the zoo we went to was the aquarium, which was the biggest boner inducing place in the zoo. They rebuilt the place basically a few years ago, and the aquarium now is massive to what it was when I was a child. I could only snap a few pictures, but there is so much cool shit here to rub one out over. This was a small tank that had a few sea urchins in it, which are known to all as the fleshlights of the sea. They're pretty to look at though, with some beautiful colors.

After the sea urchins and other small tanks, we moved into the area with larger tanks and one of the things we found were some sea turtles. Some of you might recognize this guy from his hit cameo in Finding Nemo. Sadly, he's a bit of a washed up drunkard and not resides inside a tank at the zoo where he just floats around thinking about the good old days until he dies of old age. But, hey, at least he's pretty cool looking, right?

But, yeah, pretty cool to look at, right?

Anyways, that's enough of this silly shit. Hope you enjoyed the pictures and what not. Not sure if I'll be doing another post like this anytime soon, especially since the zoo likes to pound your ass hard for those dollar dollar bills unless you go in on a Monday morning. I'll have a few more posts out on my more normal shit in the next few days, and then I dunno where else I'll be going from there. So, until next time take it easy you bunch of slutterbutts.

Wow. They should have you writing the scripts for nature documentaries. I would sign up to hear David Attenborough reading your blog posts come to think of it :)

Appreciate the kind words, man. Though, I think everyone would agree David Attenborough has the voice of an angel getting their ass eaten. The man could narrate dog shit sitting in the rain and it would be absolutely enthralling.

lol, i second @carlgnash 's opinion. At the minimum they could have alternative pamphlets or an audio tour available with rental headphones. I'd pay for that and even though i wouldn't learn anything factual... who needs that crap anyway?

Quick, someone start a kickstarter for me to do this and then I can rip people off and provide them a 2 minute audio recording of me shitting that I took on the toilet 3 years later!