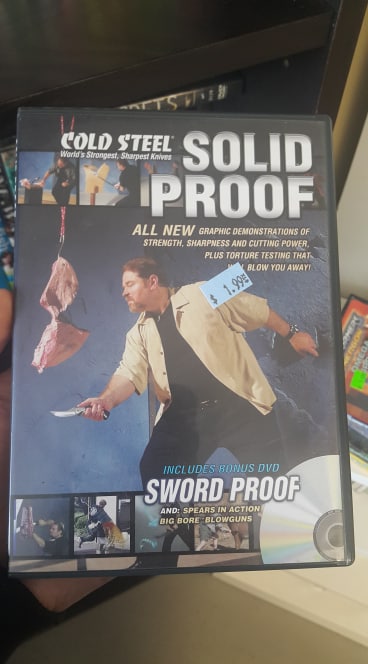 Well, it's been a literal eternity since I last posted, so I figured I should rise out of my coffin like Dracula looking for his fleshlight and probably put a post together. So, today for you god damn turbo virgins I have some absolutely powerful items I found while looking around at the local thrift store. Full disclaimer now, just because I'm about to make your nipples hard doesn't mean you have to show me your tiddies and throw your bitcoin at me, people. Especially in front of your significant others. Now, onto the holy grail's of thrifting.

Lets start with one of the most impressive, masculine filled items to ever be dumped at a thrift store in the country. After entering the store, I made my way over to their DVD/Game section and found this absolute legends of a DVD, a Cold Steel demonstration video, baby. Move over, Forged in Fire, there's a new alpha chad on the block. Have you ever just wanted to watch a pudgy middle aged man cut through all kinds of shit? Well, you're in for a fucking treat. Because, this DVD is probably just nothing but old men molesting knives for 38 minutes non stop.

After I slid that wonderful little item back into the DVD section, I decided to browse around a bit more to see if there was anything else I might have missed. Truly, I must be blind to have almost overlooked this next piece of media. I would assume unless you're a true anime connoisseur that you probably won't know too much about this. But, don't worry, not everyone can be a big dicked intellectual with several waifu's. Behold, the legendary anime that has influenced generations upon generations: Beyblades, baby. Let that shit rip right into your dickhole.

I really considered getting this, but, alas, I'm broke as fuck so I can't squander my funds on random epic tier shit like this. Perhaps if it was god tier, say, like Yu-Gi-Oh in terms of anime quality, I would have picked it up. Instead, it will probably go to some 10 year old whose grandma thought little Timmy Billy would love this. Which will then infest the childs mind with resentment towards his grandma, manifesting itself into elder abuse once he's a teenager. Quite the classic case when Beyblade's involved...

Anyways, after putting that back I peaked at their used video game section for a bit and found quite possibly the most impressive used game you could possibly find at any store in the US. You see, my eyes were practically assaulted with what I can only say is the equivalent of having g-fuel injected directly into your brain stem. Behold, epic gaymerz. I give you the Barney the Dinosaur Hide and Seek video game for Sega Genesis. I can only imagine how many children have probably been diddled by their creepy neighbor while this game was on the TV to distract them. This is certainly one of the most cursed games in existence, therefore I had no choice but to put it back since I don't make "Contacting Barney at 3AM CURSED VIDEO GONE WRONG" challenges. After this, I gave up on the media section and continued on with little hope of finding anything else cool. Boy, oh boy, was I wrong!

Fuck yeah, baby. The collectible figure to end all collectible figures. No where can you find something as testosterone filled as this beautiful piece. Move over, Funko Pops, watch out figures of anime girls that people masturbate on and post online, no one can handle the pure majesty of the Crazy Cat Lady figure with hypoallergenic features included! I have no idea who donated this or why, but my fiancee and I sure as fuck weren't going to leave this here for some furry to pick up and go to town on the cat figures like some god damn degenerate redditor.

Anyways, hope you enjoyed my findings of the local thrift shop. Been meaning to post this for awhile, but I've been basically half dead for the past several weeks. Got some other things in mind for posting, though it might be a bit. So, until next time, take it sleazy you fucking whores.

I just received your memo. Thanks

will be happy to help with a portion of my steem power.. any links to help me power it down etc so i can ship your way .. regards cnts ;]

Are you planning to power down your steem and move away from steemit?

What kind of links are you asking about? I'm seriously not sure :)

I have steemit power in limbo. Free that and release some to your cause.
Its been so long since on here i forget how to power down. ;]

Thx for prompt reply. Appreciate it.

It seem to me that you managed to power down already :)

Do you have discord/telegram? Perhaps you can join our discord server and DM me? https://discord.gg/Mwkw5E

Also you can delegate / undelegate your SP using https://steemworld.org/@cnts

Also if you would like to delegate directly to project.hope, then you can use this link:

Where YYYY is amount of SP you would like to delegate. We're sharing 100% manual curation rewards on weekly basis, so you could consider it to be a passive income :)

I want that crazy cat lady, I have a log lady from twin peaks figure

i have heard about the crazy cat lady toys but thought it was just a rumor. I can't believe you let that thing go! Hope you hid it for a later date as that is likely one of the most valuable collector's items in existence.

Oh, no. We brought the cat lady figure home. I put away the coffee mug I was going to get and just got that instead since my fiancee also demanded we save it from being a semen dump for some drugged out furry. Priorities, baby.

well thank goodness for that! Score!

I have that Barney game! My brothers and I use it to stash gift cards. It was one game that we owned back in the day when my brothers were really little.

We actually pulled the game out at an anime convention once. People sat down to play it, and started timing each other for the fastest completion of levels.

Ah, I should have opened it and checked for a secret giftcard then. Hell, I'd have been happy with a secret stash of Krokodil even.