OK— I just got back from the Chiropractor, and Yoga Lovers, we need to TALK. 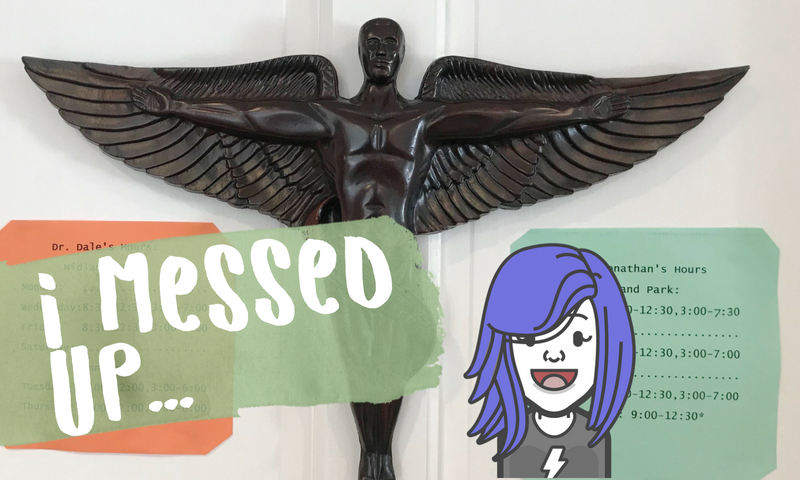 Call it stubbornness, call it being greedy with my time and wanting to work too much, I was avoiding going to the chiropractor, but if you follow @teamhumble and myself, you may have noticed we’ve been getting a lot of medical things sorted lately.

If you’ve been following along on my blog, you may have noticed I’ve been in on and off low back pain since February. If you’ve ever dealt with chronic pain, you know how incredibly frustrating it may feel to be doing “all the right things” and feel like you’re not getting anywhere.

For a bit of context, let me tell you that I do yoga every single day, and sometimes twice a day when my back is bothering me. From a previous visit to the doctor I learned that I have SI joint pain which is very similar to sciatica nerve pain (and is often misdiagosed as sciatica), but instead of there being a pinched nerve in play, it means that the joint itself gets knocked out of place.

Yep ouch is right.— Yesterday I went for a long walk, and noticed a CLONK CLONK when I would kick my left leg out to take a stride, and so with some Shia LaBeouf-style motivation from @teamhumble I decided I’d see the chiropractor first thing this morning.

I found my chiropractor actually from a working situation, one of my mom’s clients was moving and retiring and she had been working the front desk there for year, I was only part time at my sales job at the time, so I decided to take the job, and that’s where my interest in holistic preventative medicine kind of began. I learned SO much while working there, and got free adjustments as a perk, it was one of the best jobs I’ve ever had.

When I walked in the office it was nice to see all the familiar faces, and great to see that the replacement I trained when I was leaving was still there.

I sat down and waited amongst the other early birds who were also there about 20 minutes early. I was the youngest one by about 50 years, seriously it was like I had walked into a casting call for a Cocoon movie reboot...

I think maybe one day we need to make a coffee table book of the thoughts we have in the waiting rooms of doctors offices to help others with waiting room anxiety… it’s so silly when I think back on it now.

My name was called and I told the doc what had been going on, about the CLONK-ing and the pain and that I’m pretty much the best because I do yoga every day and make sure to stretch TONS.

Then he said something to me that I hadn’t considered… He quoted a famous physiotherapist, and of course, now I can’t find the exact quote but it was something to the effect of ..

“He who looks to pain for answers is truly lost.”

(if you know the quote to which I’m referring let me know in the comments, it’s driving me crazy.)

Turns out I was causing myself more undue pain and aggravation, because whenever I’d have a flareup I’d stretch, and work on mobility and focus on the side of my hips that hurt. Turns out I’m now hyper mobile on that side of my back and it’s the OPPOSITE side that’s locking up in order to compensate. That hyper mobility and destabilization on the ouchey side was also the cause of the CLUNK-ing and over stretching was sending my back into spasm, hense the pain.

Here I was thinking all this extra yoga and hip work focusing on my left side was helping, and I was really making maters worse!

I went through some of the poses I do when I’m in pain, and the Doctor was able to advise me which to avoid on that side, and that I really needed to work on overall hamstring flexibility. (apparently, those muscles are so tight that they’re pulling my pelvis backward like a tipping bowl of water, which is ALSO causing me to lose the curve in my lower spine!) Of course, all this seated time doesn’t help either so it’s going to be lots of extra standing desk for me as well.

Who would have thought that my low back and hip pain was coming from tight ham strings!!? The point being, when we’re in pain we often tend to focus on the source of that pain, and fixing that exact area- instead of getting the bigger picture of what’s causing the pain.

This whole time I was doing more harm than good, trying to release a side of my body that was overly mobile and now destabilized! EEK! I’m sorry body!!!

Doc took the time to explain what was going on and show me on this skeletal muscle exactly what was happening when I was CLONK-ing, and then we did a full adjustment, INCLUDING correcting two discs in my neck that were restricting blood flow to my brain.. OH, BLOOD FLOW TO MY BRAIN THAT’S NOT IMPORTANT OR ANYTHING!!?

when I used to talk to folks about going to the chiro they’d always say how scary they thought it was because of that popping and cracking sound.. well I’m here to let you know that cracking is the LAST thing that’s going on, for me I’ve never felt anything but relief, even when I go in with an injury….

I’m not here to trash yoga, I LOVE yoga! And I’m certainly going to continue working daily to improve my body and calm my mind, but I guess what I’m saying here is, if you’re in chronic pain, see a doctor you trust (hopefully not one that will just give you pain killers and send you on your way), one who will take the time to learn about your lifestyle and guide you about possibly harmful things you’re doing that's making things worse!

The way yoga is presented in photos and videos on instagram and in the media may not be the most healthy representation. I think there’s this unsafe obsession with flexibility, especially as women in the yoga community. Hyper flexible women are often sexualized and praised for their flexibility, because that’s what the outward appearance of someone doing yoga looks like right??

If I were to say to you “picture a woman doing yoga”, you’re probably picturing something like this….

You’re most likely NOT picturing THIS…

Also no hate if you can hang from doorways and do all the cool instagrammable yoga- that stuff takes a TON of stregnth and flexability, much respect in fact!

What I think we sometimes fail to remember is that some folks are NATURALLY flexible and some aren’t. I’m one of those non flexible folks. I remember being one of the most athletic kids I knew growing up, and until I started doing yoga as an adult, I couldn’t even touch my toes.

It’s certainly much better since I’ve started, and I need all the help I can get because I sit for so many hours a day, BUT this wrongful association between hyper flexibility and “good yoga-ing” ended up hurting me.

Please don’t take this criticism of the commercial side of yoga as me passing the blame for my pain. One again, I pulled a CLASSIC Dayle move. I over did it, I tried to force my outcome instead of trusting the process. I tried to get to where I wanted to be by achieving my ass off, and almost did, quite literally.

So what did I learn today?

I learned to be kinder to myself, to start with DATA from a trusted source rather than speculation and google-ing, and I’m working on accepting the things my body can do, and the things it can’t.

There’s a teacher on DoYogaWithMe.com who says, “If you can’t do this pose, don’t worry about it, there’s always next lifetime.” -- I love that, I hope I come back as a floppy red panda...

I hope this post encouraged you if you’re in pain, or working through pain. If you’re frustrated with your progress or feeling down about your practice.

I feel a lot of freedom in sharing my stories with you hereon the blockchain, and I thank you for being here to read them, and so I'll leave you with the most perfect gif to wrap up this entire post...