My Cat Came Out Of A Box And Showed Herself 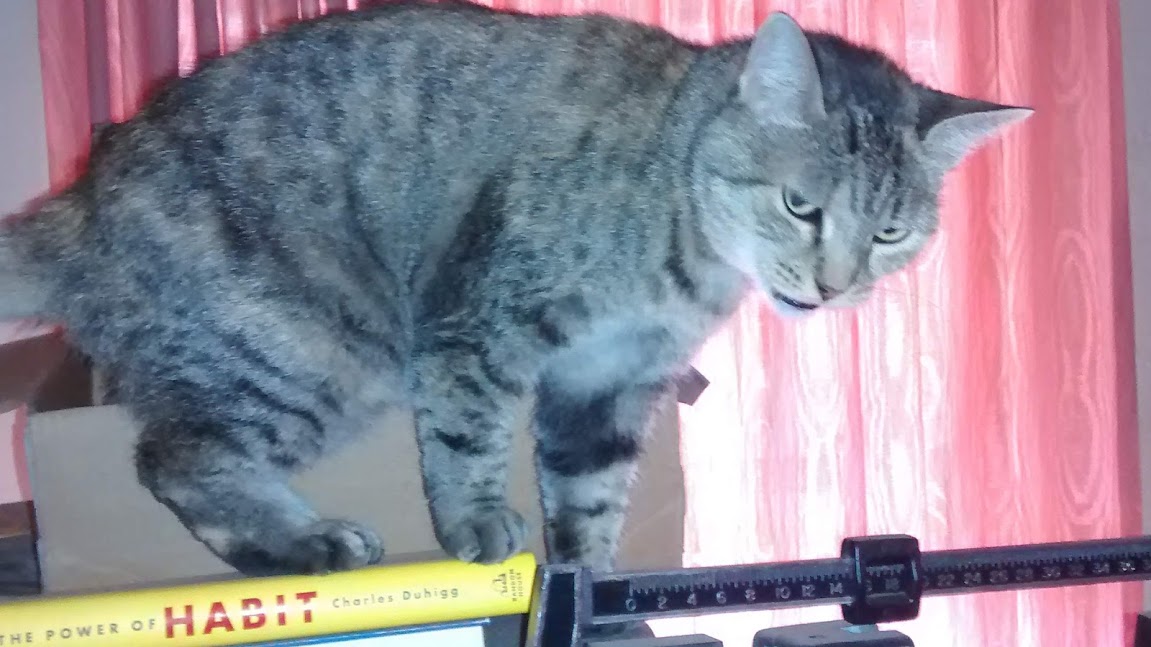 My cat is always finding different places to hide. This time she found a little opening in some stored boxes and hid herself in the top box.

I called her name and I heard some movement in a box and her head appeared. Well I didn't see her for awhile and she finally came out from her sleep.

So now you see in the picture that she came out and is literally standing on the book called, The Power Of Habit by Charles Duhigg. It is a great book if you would like to change some bad habits to some good habits.

So is my cat going to try to change some of her bad habits? No, I don't think so, but it was a good try.

Also in the picture you see the top of a scale. Yes, I am older now and I have gained some weight from my younger years. Well, I have been trying to stay more active and to eat things that might help me lose weight.

I used to wonder what is this pulse? Well, I find that pulse is foods like beans and lentils. Well I have been eating pulse too. Well, it does make you feel full and if Daniel ate something like that in his day, I can eat something like this in my day.
I have been looking into making a lot of cabbage soup also. I mix in a lot vegetables and even seaweed, wakame seaweed. I cook it with coconut oil.

So my cabbage soup will have a lot of minerals and the coconut oil will even help with memory.

Did you know that coconut oil can help with memory? I was tellling one of my tlephone company co-workers of coconut oil andd memory sometime back. Then se told me of her mother that has been taking in coconut ooil. So her mom talks t her ddaughter, one of y co-workers back in the day. Well her mother would ssay things like, o you remember when we used to do this and that and my co-worker would say, Mom, no I don't remember that.

Now that is interesting, remember how I wrote in another blog about going to a high school reunion and I talked to one of my class mates of things that happened back in the mid and later 70's. I told him of certain things that happened back in high school in those days and he asked me, How do you remember all these things? Well, I think that the coconut oil helps and also the yokes of eggs help the braain also, along wth the wakame seaweed.

Well, lets get back to my cat. Funny I am writing and keying on the keyboard and she is not bothering me. She must have found something more exciting to do.

Let's end with a scripture, Till I come, give attendance to reading, to exhortation, to doctrine. 1 Timothy 4:13.

If you enjoyed this blog, please upvote and follow.
Thank you, David.
Image is mine, taken with my Moto G.

Perhaps your cat knew you're "gossiping" about her. That's why she kept bothering you/ hahahaha

Hello @david777111, thank you for sharing this creative work! We just stopped by to say that you've been upvoted by the @creativecrypto magazine. The Creative Crypto is all about art on the blockchain and learning from creatives like you. Looking forward to crossing paths again soon. Steem on!