I Found A Working Payphone 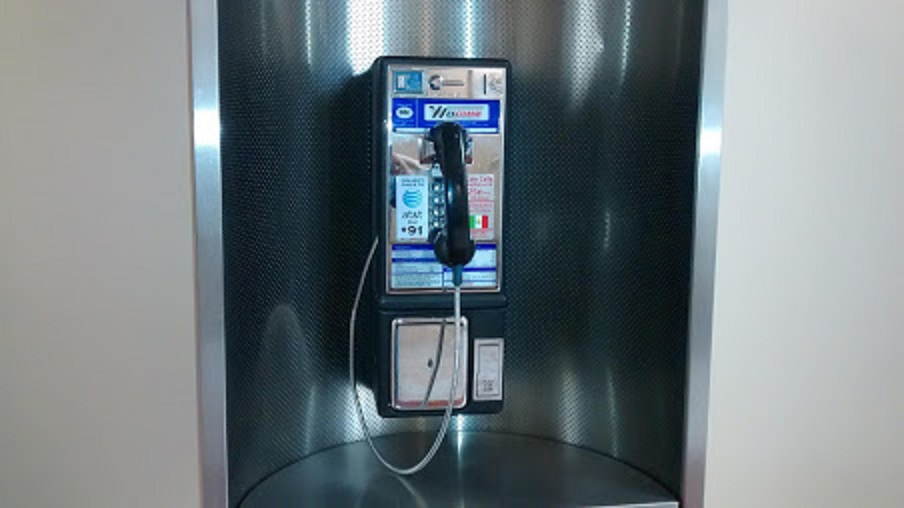 Funny how these things are almost extinct. Just for the heck of it I did lift up the receiver and I did hear the dial tone. Well that is when you know a line phone is working, by hearing a dial tone.

On the cell phone, there are no dial tones. I guess the line phones and the cell phones are worlds apart. I remember as a kid I wanted my own phone in my room.

So I went into my parents room and spliced in extra wires and ran that line into my own room. That way I can make a phone call in my own room. I don't even remember asking my parents if I could do that.

Well, I guess they were pretty cool about that. You see we had two phones in my parents house, one was in the dining room and the other was in my parent's bedroom.

Well, I would be talking to some girl in my parents bedroom, but what if my dad wanted to go into his bedroom and lie down? Well, then the conversation wouldn't be so private.

So I thought it would be good to have a third phone in the house on the same line as those other two. Well anyway I got an old rotary black phone in my bedroom. They did have dial tones in those days, but the pulse phones worked too on those same lines.

Well, I guess it is still not so private as someone can still pickup on the other phones in the house and listen in. I thought it was a good system.

You can't do that on a cell phone.

So I started out working for Pacific Telephone company and they broke away from AT&T to become Pacific Bell, then some how they changed their name to Pacific Telesis, then SBC merged with us then we took on the name of SBC, then AT&T that broke from us in the beginning was really cheap to buy so SBC purchased them and since SBC bought AT&T they also bought their famous name so SBC decided to use AT&T as their name since it is a famous name that is over a 100 years old at this time. So because of all these name changes I just write that I used to work for the telephone company.

I worked as an information operator. There were people that left our office to become coin collectors during the time of Pacific Bell. This is when we could see Pacific Bell phone booths all over the west coast and some times the movies as Hollywood is in the west coast, but if you remember the 1990 movie called Die Hard 2, I was in a movie house at the time when I was visiting the east coast. Well in the movie Bruce Willis is in front of all these payphones at the airport, but they say Pacific Bell on them. I heard the movie house saying, Pacific Bell and laughing and some complaining. You see to them it was a big movie mistake.

Oh so yes, let's get back to the coin collectors of the company's payphones, some of my co-workers became coin collectors they had to go to where ever the Pacific Bell payphones were and collect those coins. So after awhile they had to look for other jobs in the telephone company as the payphone was dying out and people were getting cell phones.

Well anyway, here is a last dying breed of a payphone and no it is not a Pacific Bell or AT&T payphone. It is an independent payphone of some sorts and it costs $0.50 to make a call.

Let's end with a scripture, as it is written, with Jesus speaking, If ye abide in me, and my words abide in you, ye shall ask what ye will, and it shall be done unto you. John 15:7.

If you enjoyed this blog, please upvote and follow.
Thank you, David.
Image is mine, taken with my Moto G.

Wow that is a cool find indeed! I've not seen one in many years! :-)
My mom had one them old big black phones with a long long cord.
Be surprised how many times it dropped to the floor and still worked!

Yes, those old ones were pretty sturdy. Thank you @shasta!

You have been curated by @simms50 on behalf of Inner Blocks: a community encouraging first hand content, with each individual living their best life, and being responsible for their own well being. #innerblocks Check it out at @innerblocks for the latest information and community updates, or to show your support via delegation.

Thank you @innerblocks and @simms50!