Titans get a crucial win in Atlanta! 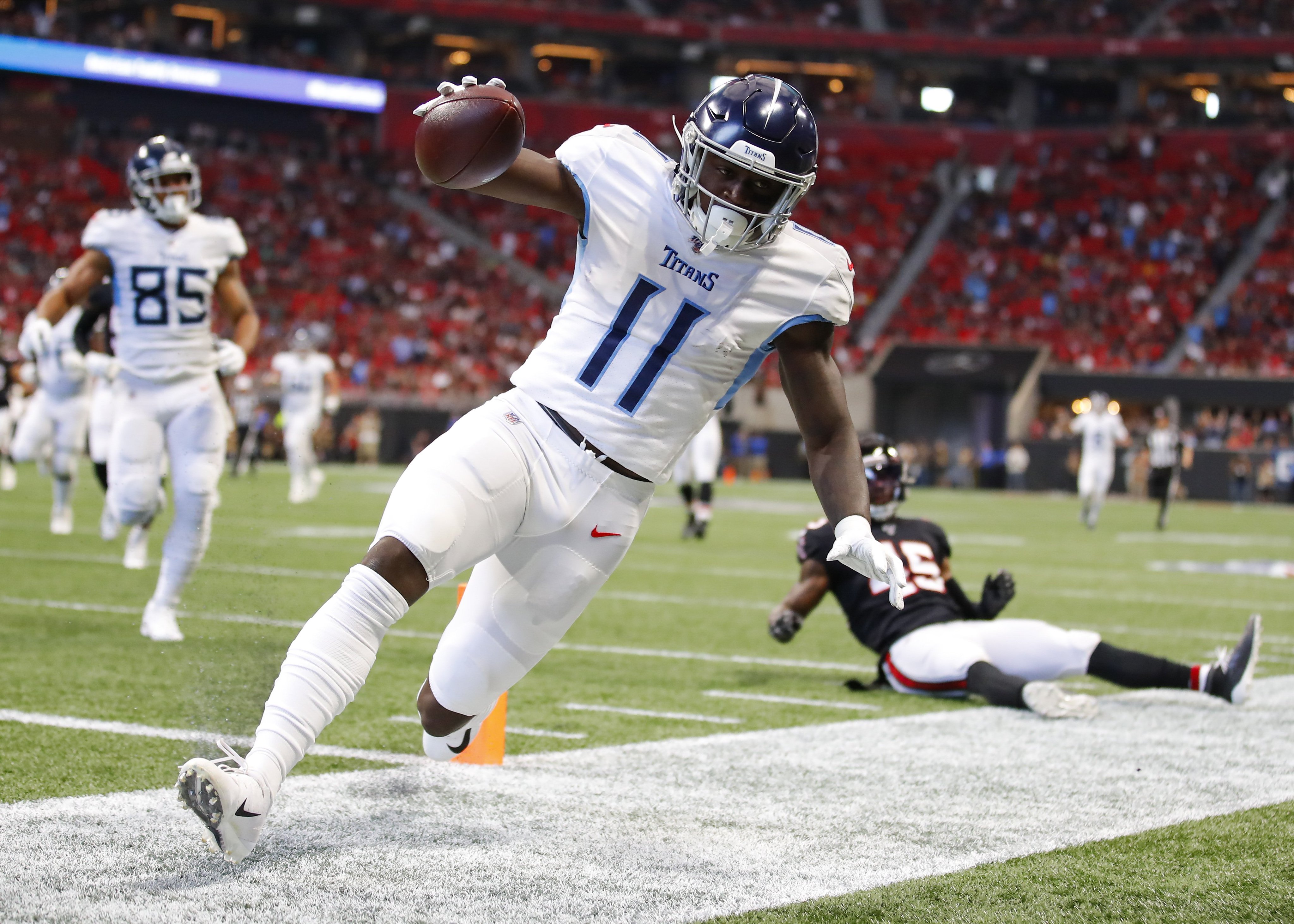 Just an overall great and much needed win for my Titans! Every phase of the ball the Titans were efficient and crisp. This Sunday the Titans were a well oiled machine. I have no idea if this team will show up next week against Buffalo, I very much hope it does. Until then I shall just enjoy this win.

Quarterback Marcus Mariota played a really good clean game, he made plays. He has yet to throw an interception in 2019! Today he completed a pass to eight different players. I hope he can keep it up.

The defense of the Titans showed up once again, at this point it has sort of become the standard. They still totally deserve their props! Defense is so important.

But the two players I really want to highlight are the Titans two young wide receivers. ROOKIE A.J. Brown and third year man Corey Davis. They showed up BIG TIME today in Atlanta.

Source
A.J. Brown scored his first career touchdown and then scored another! When Brown gets in the open field his superior size and strength is often evident. He's shifty, has great feet, and a mean stiff arm. I am so excited about his potential. He finished the day with 3 receptions for 94 yards and 2 touchdowns!!

Source
Corey Davis was mister reliable today! He was a great pass catcher. He displayed strong run after catch skills when he converted a crucial 3rd and 15 on a pass that was 5 yards short of the first with about three defenders nearby, he managed to find the soft spot and move the chains. So clutch. Davis finished the day with 5 receptions for 91 yards and a touchdown!

It's such a foreign but SUPER great sight to the the Titans get this type of production from the receiving core. What is crazy is that it is TWO guys who played well, not just one. I can't tell you the last time I felt excited about Titans receivers. Crazy.

Its so cool to think the Titans can take pressure off of Mariota and the running game. Derrick Henry and Dion Lewis are not the main/only offensive weapons anymore!

Who knows how the season will go for the Titans but like I have said several times before all I can do is watch and hope. I am going to enjoy every W my team achieves! #Titanup

How did your team do today? What are your thoughts on this NFL season four weeks in? Sport and Steem on!

Congrats on your team winning. After what happened last week, I didn't really give them much of a chance today. They proved me wrong obviously. Titans so far are a hard team for me to cap correctly. Seems like when I think they're going to swerve left, they swerve right.

Trust me you are not alone in wondering how good or bad the Titans are. This has been a problem for several years in Tennessee! Pretty much zero consistency. Three straight seasons they've finished 9-7, now so far this year they're 2-2. They beat good teams, then lose to not so good teams. This team plays with my heart too much sometimes hahaha. But I am just going to enjoy the wins as they come!

Ahh...it was a much-needed win and happy to see Titans back to form again. But they have to have sustainability and consistency.

Yes they definitely need to be more consistent. Consistency has been an issue since 2016 for the Titans I hope that changes this season!

A nice win for your boys! I was happy to see A.J Brown get his first TD. He looks like he's going to be something special. What is the deal with the Falcons this year?!?

Thanks man. I am probably a little too excited about Brown if I am being honest. It looks like he might have an 'it' factor. But it is only 4 games so it's probably too early too call.

The Falcons man who knows. Kyle Shanahan's (if that's the right spelling) absence has been possibly a significant reason but I really don't know. Perhaps they will still finish strong, but it's definitely mysterious.

Good luck to the Vikings next week!

Congrats on the win. Titans are a Jekyll and Hyde type team so far, you wonder which team will show up. Nobody is taking the lead in the AFC South so it is wide open. Good luck against Buffalo.

Oh man my Titans are definitely bi-polar! Nothing new sadly, as they have gone 9-7 three straight seasons now through four games they are 2-2. So yeah there is a disturbing lack of consistency but all I can do is watch and hope and be a supportive fan! Thanks I hope the good version of the Titans come to play this Sunday! Nice meeting you thanks for commenting!