The Tennessee Titans defeat the Oakland Raiders, set up for huge showdown against Houston next week 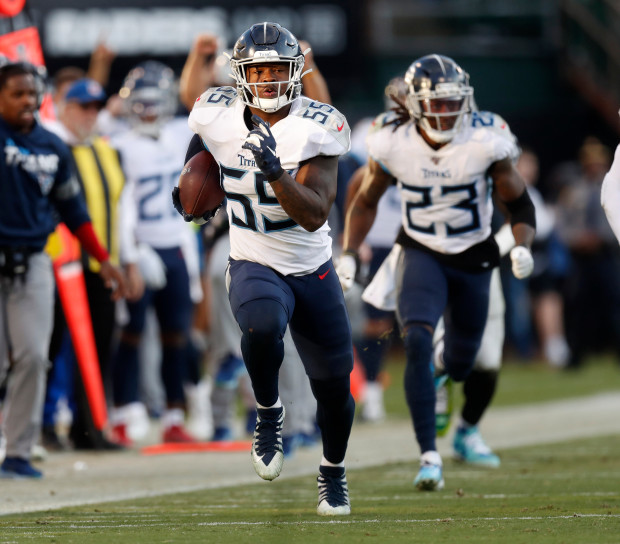 Wow!!! These Titans have been doing work these past couple of weeks! I am pumped up!

Titans Linebacker Jayon Brown returns a fumble 46 yards for a touchdown in a win against the Oakland Raiders.Source

Of course its no Titans victory without at least a little stress.

The Titans began the game on offense. They were moving the ball well, and got within field goal range, until QB Ryan Tannehill attempted a screen that was tipped into the air by a Raiders defensive lineman. The tipped pass was then intercepted by another Raiders defensive lineman and returned for fifty-two yards. The Raiders ended up scoring a touchdown with very good field position. 7-0, Raiders.

I know the Titans moved the ball on their first drive and have generally been hot, but I was nervous a little still. This was a big game.

I didn't need to be nervous long though, as the Titans responded well on their next drive. Mixing the run and pass well, converting on third downs. The drive ended with a nice twelve yard rushing touchdown by RB Derrick Henry. It was all tied up now, 7-7.

The Titans played well overall offensively in the first half, really well actually. A.J. Brown finished the first half with two awesome touchdown catches, a ninety-one yard bomb and a sixteen yard score. The rookie has looked amazing!

Despite the great first half, the score at halftime was all tied at 21. Honestly though, in my opinion, only one of those touchdowns for the Raiders was well earned. The other two scores were mildly flukey. The one touchdown was off a turnover where they had momentum and fantastic field position. Their other touchdown was off of a total blown coverage on the Titans. Derek Carr found a completely wide open receiver. You'd have to see the play to understand how silly it was. Good on the Raiders and Carr for executing and finding that receiver. But I personally find it slightly flukey because the Titans rarely mess up defensively that badly in the secondary. I had a feeling bad plays like that would not continue. It turns out I was right, as the Raiders would end up not scoring another point in the game after the first half. The Titans would actually be leading by three at halftime had the Titans not missed yet another field goal right before halftime.

The second half was all Titans, just like most games in their recent hot streak.

The Raiders began the second half with the ball, and actually drove the ball a bit. But of course defensive lineman, BIG Jeffery Simmons came up with a massively important sack on third down. The sack drove the Raiders out of field goal position! Very clutch.

After that play, the Titans slowly started taking over the game.

It seemed that nearly every drive the Titans found a way to move the ball. RB Derrick Henry found the endzone on a ten yard rushing touchdown. Ryan Tannehill found tight end Jonnu Smith on a seventeen yard play-action pass to the back of the endzone. Before you knew it, the score was 35-21, Titans on top.

Offensively the Titans were looking very sharp. With a two touchdown lead, it was the defense's turn to make a play.

The Titans had a two score lead, but there was still an entire quarter of football to be played. The Raiders needed this win to keep their playoff hopes alive. They were going to keep firing. But it wasn't meant to be. Titans' third string cornerback, Tye Smith, punches the ball on a Raiders tight end and forces a fumble that just stayed in bounds. Titans' linebacker Jayon Brown recovers it and takes it all the way to the house. A fourty-six yard fumble recovery for a touchdown. 42-21, Titans.

42-21 would end up being the final score of this great victory for the Titans. The Titans are 8-5!

It really felt as though that the Titans could score on every drive they possessed the ball. Ryan Tannehill feels like a quarterback I want the Titans to keep long-term. He has played lights out.

Derrick Henry has played lights out as well. He dealt with a mild hamstring injury but played through it and still rushed for 100 yards.

Source for both images.

I personally love the defensive play on this team. I have since 2016 to be honest. There is a strong defense in Tennessee.

This win for the Titans sets up a CRUCIAL AFC South matchup against the Houston Texans next week. I am already freaking out just thinking about it. Both teams sit at 8-5, Houston on top with a better record within the division.

The Titans actually face off against the Texans twice in these final three weeks of the season, with the New Orleans Saints sandwiched in the middle. On paper the games look daunting. But with how hot the Titans have been, let's see how this plays out.

I feel confident in this team right now. Obviously I wish the team was 13-0, but with all things considered, its a fun time to be a Titans fan!

Congratulations! Your post has been selected as a daily Steemit truffle! It is listed on rank 7 of all contributions awarded today. You can find the TOP DAILY TRUFFLE PICKS HERE.

Ryan Tannehill's career resurgence with the Titans is unexpected to say the least. Lots of tough games ahead for the Titans though. Luckily the Titans are RED HOT right now. They're going to need it with a schedule from hell coming up. Saints still playing to win since seeding still in play while the Texans aren't going to give up the division without a fight. 3-0 is probably too much to ask with the calibre of opponents coming up but 2-1 might be do-able if the Titans can keep the level of their play at a high level.

Yes its definitely unexpected, but sometimes I wonder if the league is impatient with quarterbacks. Always rushing them to start. Maybe Tannehill needed more time to develop in Miami? Tannehill often played injured in Miami. Miami as an organization has not been too stellar, and it doesn't get easier when you play Tom Brady and Belichick twice a year. The Titans feel hot, I believe the Saints and Texans should also be wary of Tennessee. It is definitely daunting and I am pretty worried. But I certainly do not see the Titans getting blown out in the near future. Not sure what to expect, but I can't believe the Titans have come as far as they have after being 2-4. I did predict the Titans would go 11-5 before the season began LOL. Three huge games GO TITANS BABY. Thanks for commenting!!

Congrats on the win man! This team is still floating under the radar but building a lot of momentum. I really hope they make the playoffs!

Yes the Titans are definitely under the radar, but I like it that way! We are so close to the playoffs I hope they make it in too!! Crazy season I hope good things keep coming!