Call for crabs / Where have all the minnows gone 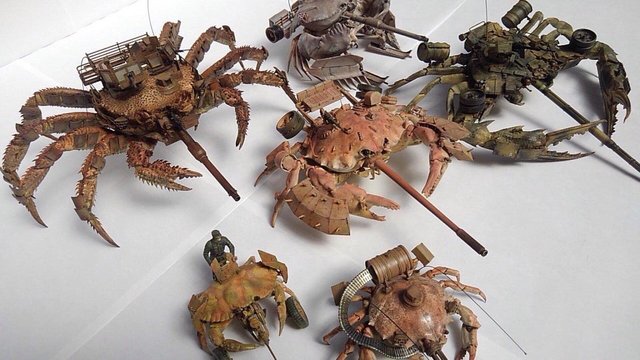 Downvoting is a big topic since newsteem.
Some are very opposed to the whole concept, but most understand why it is a necessity on a decentralized platform without another option to regulate rewards.

Taken from reddit, no source found
The originall STEEM whitepaper states on page 12:

> Through the addition of negative voting it is possible for many smaller stakeholders to nullify
the voting power of collusive groups or large, defecting stakeholders.
[...]
The use of negative voting to keep people from abusing the system leverages the crab mentality that many
people have when it is perceived that one individual is profiting at the expense of everyone else. While crab
mentality normally refers to short-sighted people keeping good people down, it is also what allows good
people to keep bad people down.

Unfortunately, most of the smaller crabs leave the responsibility to whale accounts. The notion "but what can I do, I'm just a small fish", which is so common in the politics of the outside world, seems to be very prevalent in this community too.

This thinking is really destructive. Let me give you a perspective: the @curangel project has upvoted nearly 2000 accounts during the last month. Even if each of those had a vote of only 1 cent, that would give them enough power to collectively counter the actions of the (probably) biggest abuser on here - @haejin (who switched from self-upvoting to downvoting people who care and upvoting other shitposts).
Most certainly the average power is higher than that, and you are not alone. Many whales stand by your side, and if the whole community works together the free downvotes alone would be enough to drown abusers.

Of course retaliation is a reality, and many refrain from taking action because of this. But with this attitude, you only push those doing the work in the focus. We at curangel are kind of getting used to all our posts being greyed out because of revenge downvotes by now. There were some attempts by bigger stakeholders to recover them, but they seemingly got tired a lot faster than the retaliators.
But as a community, we have the possibility to stop them from targeting individuals. If hundreds of minnows band together, there is just no way all of them can be targeted for revenge. You may receive a hit once in a while, but keeping out of it completely allows the retaliators to focus on a few good people like @adetorrent. Luckily he and others don't worry about it too much for now, but for how long will they stand when most of their posts get hidden on a constant basis? If everyone keeps out of the fight, and the abusers are successful, you might sooner or later be alone with them on the platform (exaggeration intended).

This is a call to arms. The EIP is based on the assumption that people care about this community, and that we all want rewards going to those who do. Self- or circle voters do nothing but extract value, and it's the job of all engaged stakeholders to stop them. With power comes responsibility - smaller SP may mean less of it, but it's still important to use it!

Let's get together and clean this place up. As it was said before - don't be afraid, they can't downvote everyone!

If you need inspiration, someone created the following infographic after analyzing one of the, or maybe even the biggest circle jerks to date. Our delegators currently focus mostly on the circle using the #steemschools tag, which is connected to this one too (basically consisting of @dobartim shown below and his brother @flysky). Steemworld is a great resource to check the behaviour of individual accounts. If you find someone else constantly rewarding himself or his circle and only marginally spreading the value, add them to the comments or post them with the #antiabuse tag.
For those who are not so active, there's also several (1, 2, 3 on @pharesim's blog for a step-by-step tutorial for the official @curangel trail on steemauto!