I Can't Even Watch The Markets Nowadays 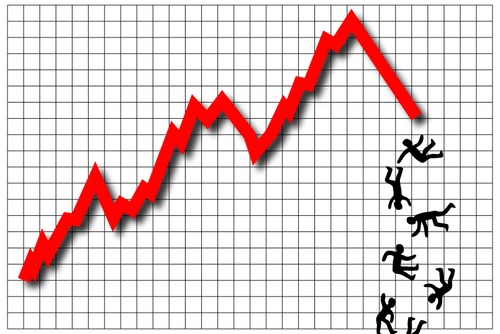 I am tempted to look at the cryptocurrency markets in particular lately because of the plunge in prices. But all markets are down today because of the folly of some few people trying to compete which schlong of theirs is longer.

It infuriates me that this is happening in our modern times, we should not be engaging in a potential war which is I would compare in spitting up in the air and hitting you face when it comes back down to you, or to be more fitting getting a hammer and hitting your head with it.

Why can't these powerful entities just make peace and cooperation, trade, and impact the economy in positive ways and means. But the issue that they are avoiding is what they are brewing which are economic hardships not only against the direct parties but also against the whole world, we are just intertwined even though the issue is too far away from where we live.

It makes me angry why these people are impacting my life, to make me feel worried, frustrated, and sad because of what they are doing and we have to suffer from the effects of their decisions.

Now that the oil prices are going-up and the markets are down, the future looks ominous to really bad. I do am worried about the war, rumors of wars, the pestilence of the Pandemic and the difficulty of earning money plus in my case I will feel the blow more than ever if hospital bills would change to add in my burden.

As for the markets I already had bought in but the prices had continued to fall. I have no more money but some SBD to buy cheap Steem tokens which I am apprehensive to buy because it is actually not in my plans.

I already had regrets in selling some of my tokens because they are hard to acquire and yet so easy to sell. So I am just practicing the diamond hands though it is just psychologically hard to do and carry on with your plans especially if some bad event had popped-up like this crisis with Russia-Ukraine-NATO-USA-Europe involvement where it could get worse since superpower countries are involved trying to outwit and outsmart each other so that one can get an upper-hand against the other.

Things really are not certain in life, with our own life, the markets, and all because something out of the blue would happen and affecting the lives of many others like these unusual event of health crisis due to pandemic, the dreaded inflation, plus regional conflicts that could turn this plant that we live in a heaping pile of radioactive ash.