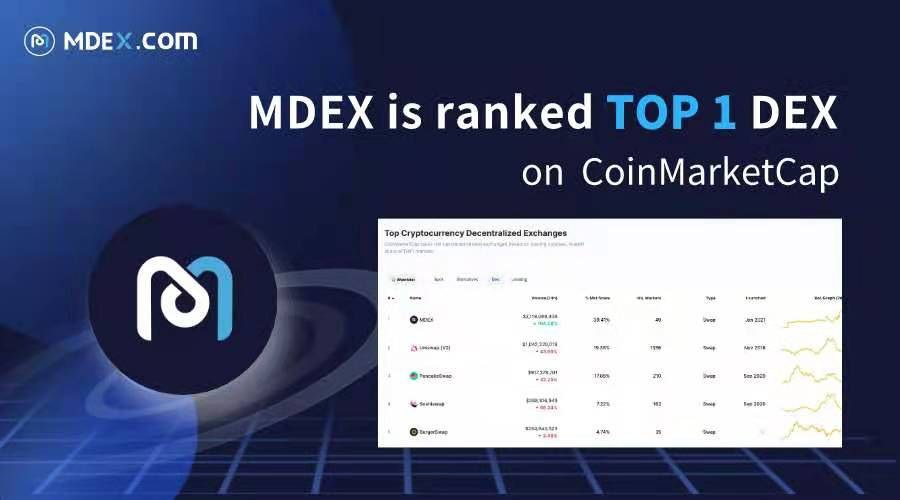 A dual mining platform based on mixed chains that combines Ethereum and Heco, is a decentralized exchange (DEX) that uses an AMM mechanism based on the idea of fund pool.

Mdex platform is to build on Huobi Eco chain which is decentralized, high efficiency and energy saving public chain created by Huobi to make creation of Decentralized applications more efficient and cost effective.

Some of the impressive parameters of MDEX so far below:

Currently the MDEX exchange has risen to the no 1 position of decentralized trading platforms based on the volume of transactions.

Basically, the way MDEX works is inherited from UNISWAP, however the feature that users can swap assets on both blockchain as mentioned, so it can be said this is a very step continent for users. It can be said that MDEX is incubating for projects in the developing HECO ecosystem.

How MDEX is different from UNISWAP?

The current processing speed of the Ethereum network is about 15 transactions per second. A Swap operation on Uniswap takes about 20 seconds, MDEX is backed by the Huobi ecological chain Heco. Taking advantage of Heco’s public chain performance, MDEX’s Swap operation time takes about 3 seconds, so users have almost no sense of delay

Uniswap users have spent a total of 31,500 ETH on GAS in the past 30 days. A transaction on Uniswap may cost the users 3 to 5 US dollars. On the Huobi ecological chain where MDEX is located, the transaction fee could be as low as US$0.001. transaction on MEDX is basically between US$0.03–0.06, which means that one HT can pay more than 100 transaction fees.

Uniswap uses universal liquidity mining. That is, in Uniswap, adding liquidity to the liquidity pool can bring benefits, which is currently 0.3% of the transaction fee, and then according to the proportion of your assets in the liquidity pool, you can get corresponding revenues, MDEX is a “dual mining mechanism” that supports both liquid mining and transaction mining.

In terms of liquidity mining, MDEX not only has the same “dual token mining pool” as Uniswap, that is, but users can also mortgage LP tokens for mining. As opposed to Uniswap that relies on two pools to ensure liquidity, MDEX supports a “single token mining pool” to enhance liquidity, which can further reduce impermanent loss. The current APY of MDEX LP mining can reach 100%-400%. Because of the low risk of single token mining, APY is relatively low, normally between 3%-16%.

In terms of incentive mechanism, users will be charged a 0.3% handling fee when participating in Uniswap transactions, of which 0.25% will be allocated to the liquidity provider, and the remaining 0.05% will be used for the decentralized governance of the community

MDEX’s transaction fee is 0.3%. According to MDEX’s upcoming Boardroom mechanism, the platform will inject 66% of the total fee charged into the Boardroom’s airdrop pool and repurchase pool. of the 66% fee, 30% will be used to repurchase and destroy MDX. The rest 70% will be used to purchase HT to airdrop MDX/USDT LP, MDX/HT LP and single token MDX among liquidity providers. Providers can collect rewards in the airdrop pool every day.