The 8 years of Coinbase 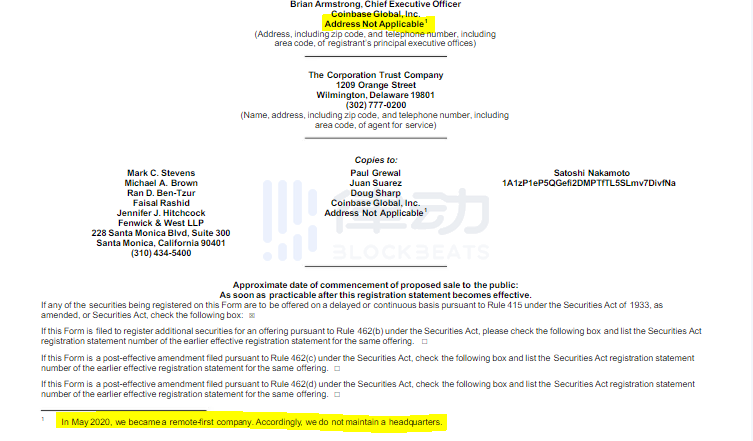 On February 25th, COINbase, the largest cryptocurrency trading platform in the United States, submitted the S-1 listing registration document with the stock code Coin to SEC, and Wall Street giants such as Goldman Sachs, Citigroup and JP Morgan Chase acted as the listing consultants.

In this rare IPO year, this is the first share of cryptocurrency.

Last year, Snowflake was included in Buffett's "Roster", and went to Wish, Airbnb, DoorDash and other newly listed rookies, then to Lacework, a new technology unicorn cloud security company, News Break, and more than ten companies that announced IPO or "backdoor listing" through SPAC. Although many miners have been listed on NASDAQ before, Coinbase is more directly related to cryptocurrency transactions, especially when Bitcoin has already become a global asset.

In this 200-plus-page document disclosed, there are many interesting details, such as Coinbase's disclosure of Satoshi Nakamoto's true identity and the development and release schedule of Ethereum 2.0 as commercial risks, in addition to bright data such as total revenue of 1.277 billion US dollars in 2020, net profit of 322 million US dollars, cash and cash equivalents currently held of 10.62 billion US dollars and total assets of 58.55 billion US dollars.

This news not only settled the long-rumored listing of Coinbase, but also unveiled the mystery of this unicorn company which was established for eight years.

If we only look at the data, Coinbase's revenue data can't compare with competitors such as Coin 'an and Huobi, but compared with many Internet listed companies that have not made profits for many years, their performance has been fairly good.

In terms of transaction volume, Coinbase, like all platforms, is also affected by price fluctuations of encrypted assets such as Bitcoin. In 2020, the cryptocurrency transaction volume of Coinbase was about USD 193 billion, an increase of 141.7% compared with 2019. In addition, Coinbase users continued to grow steadily. as of December 31, 2020, the number of authenticated users of the platform was 43 million, an increase of 34.4% compared with the end of 2019.

Coinbase has turned losses into profits since 2019-2020. According to the documents, the total revenue of Coinbase in 2020 was 1.277 billion US dollars, an increase of 128% compared with 2019, and the net profit was 322 million US dollars, while the net loss of the platform for the whole year of 2019 was about 30.4 million US dollars. Specifically, the operating cost of Coinbase 2020 accounted for 68%, and the previous year was as high as 109%, and the optimization effect was obvious. However, the proportion of marketing and marketing costs in total revenue is relatively stable, only 4-5%.

Specifically, Coinbase's revenue mainly comes from transaction fees and subscription and service income (asset custody fees paid by customers), with the former accounting for 85.8% and the latter accounting for 3.5% of total revenue.

As the leading platform for cryptocurrency trading, by the end of 2020, Coinbase held cash and cash equivalents of USD 10.62 billion, total assets of USD 58.55 billion, total liabilities of USD 43.29 billion and total shareholders' equity of USD 9.64 billion.

Coinbase's influence is by no means limited to its own business, and its accumulated industry resources and encryption ecosystem have always been the focus of practitioners' attention. According to the S-1 document, Coinbase Ventures has invested in many companies and projects including Compound Labs, StarCard, Inc and Amber Global in recent years.

According to the document disclosure, the current largest shareholder of Coinbase is co-founder and CEO Brian Armstrong, accounting for 21.7%. In addition, the list of shareholders includes a16z affiliated entities of well-known venture capital institutions, United Plaza Venture Capital (USV) affiliated entities that have invested in well-known enterprises such as Twitter and Tumblr, and well-known venture capital institutions such as Ribbit Capital, Tiger Fund and Paradigm.

Coinbase, as an encrypted trading platform co-founded by Brian Armstrong, a former Airbnb software engineer, and Fred Ehrsam, a Goldman Sachs trader, initially set out to "build a global and open financial system that promotes innovation and freedom".

Armstrong has shown his talent for starting a business since he was a child. In primary school, he peddled candy on the playground and later tried to resell used computers. In 2006, Armstrong founded an education company after obtaining a master's degree from Rice University.

Later, the bad experience of cross-border remittance became an opportunity for him to enter the field of encryption. In 2010, Armstrong read the white paper on Bitcoin on the Internet and bought more than 1,000 bitcoins at a unit price of $9 in the market. Although the price dropped to $2, he did not leave the market. On weekends or late at night, Armstrong always writes codes to buy or store bitcoins.

In the summer of 2012, he developed a wallet by himself, and made a Coinbase promotion on Y Combinator's demo day. He introduced Bitcoin, which is becoming more and more popular, to all the people on the scene, and got investment commitment.

On August 22nd of that year, Armstrong sent an e-mail to Adam Draper, founder of Boost VC, revealing that Coinbase had received an investment commitment of $320,000 and planned to finish with $1 million. He hoped that the latter could also participate in it.

Adam Draper was born into a family of venture capitalists, and his grandfather served as the deputy secretary of the U.S. Army, and later became a pioneer of venture capital in the United States. In his reply, Adam Draper expressed strong interest in Coinbase and hoped to get more information. We all know the latter things, and Adam Draper became one of the earliest investors of Coinbase.

In October of that year, Fred Ehrsam, an alumnus from Goldman Sachs, read an article by Armstrong on Reddit. He contacted Armstrong by email, and they had a good chat after meeting. Ehrsam was invited to join, which earned the trust of the company from traditional banking institutions.

In the next few years, Coinbase won the favor of more and more well-known investment institutions. A16z partners expressed great excitement about participating in Coinbase: "(Coinbase's appearance) is like Google created Gmail for Bitcoin. 」

Coinbase later provided users with services other than storing bitcoin, and it adopted a very "conservative" security measure: 99% of the assets of the platform were safely stored in the vault, and among the 41 security team members, there were many Iraqi war veterans who were responsible for assessing security risks and cryptographers who resisted attacks.

Beginning in 2016, early employees including Olaf Carlson-Wee, the first employee of Coinbase, left one after another, and in January 2017, even co-founder Ehrsam left. At that time, Coinbase was caught in a legal dispute with the internal revenue service (IRS).

Coinbase has always adhered to the road of compliance since its establishment.

On March 18, 2013, FinCEN published an Interpretation Guide, stating that institutions providing management or trading of virtual currency such as Bitcoin should be regarded as "money transfer institutions", which are subject to the provisions of state licensing, federal registration and bank secrecy laws.

Upon hearing the news, Ehrsam immediately called the lawyer, and the reply given by the other party was "this is (only) a guiding opinion, and it is very troublesome for the company to comply with it". "it will take a lot of time and money to do it.". Ehrsam recalled, "his advice to me is to try to explain why registration is not applicable to Coinbase and avoid registration for the time being. 」

That night, Armstrong and Ehrsam had a "come-on-jesus", and they reached an agreement that Coinbase wanted to be a way for a wider crowd to use cryptocurrency, and avoiding registration was a wrong way for Coinbase brands.

The decision to register in compliance adds millions of dollars to Coinbase's cost, but at the same time, it also makes it an attractive selling point. Fred Wilson, a USV partner who had publicly expressed his interest in Bitcoin, asked the two founders about the supervision before he took the lead in Coinbase in March 2013, and their "cooperative position with supervision" won the support of USV.

Although Coinbase's revenue data is not as bright as the comprehensive trading platforms such as Coin 'an and Huobi, Coinbase, which adheres to the "compliance" path, gives it the characteristics of serving institutional customers far more than ordinary investors, and determines that it can become the preferred broker for layout encryption of listed companies with deep financial resources such as Tesla.

Coinbase can be said to be the first listed company in the encryption industry if mining machine manufacturers are not taken into account. In the words of Adam Draper, founder of Boost VC and early investor of Coinbase, this will become Wall Street's "epiphany" on the value of Bitcoin. It will be interesting to witness such a scene.

Coinbase (CBSE) Pre-IPO products were launched on FTX, a cryptocurrency trading platform, before it was confirmed to be listed, with a valuation of nearly 100 billion US dollars at one time. Once Coinbase shares are open for trading, it means that there is another blue chip in the blockchain concept stocks list of US stock investors.