"The Spy Who Hardforked Me" 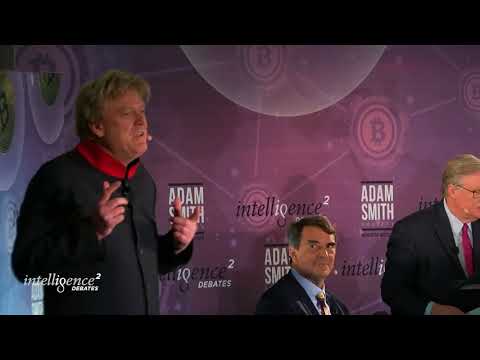 This has been an amazing weekend of events, ending with so much instability the likes of which so crazy that even my fantasy football quarterback retires... in the middle of the draft?! Yeah you heard it right these are unstable times we live in, or the instability is so over-hyped that we lose focus that we actually live in amazing times and there is a multi-billion dollar industry separating you from your money that creates that perception to distract and bewilder into learned helplessness and living on pure instinct versus anything logical. See also Dirty Laundry by Don Henley for an explanation of the people telling us about this instability.

In a story that still bewilders the daylights out of me having followed this person's career and having a very comparable world view in economics, business, and especially crypto the CEO of Overstock.com Patrick Byrne is stepping down. Usually these are sensational when CEOs step down. This one is every bit that, then some, and add (perhaps) an international incident and national scandal on top...and that is just the lead in.

As a political disclaimer Patrick Byrne was not ever a "Never Trumper," an "I'm With Her," or even a "Pro-Trumper." He was in the corner of Libertarian candidate Gary Johnson for the election and actually if we take him at his word he did not vote for either Trump or Hillary, but chose option D, 'none of the above' and selected Gary Johnson. If only that could settle his conscience and allow him to rise above the psychotic fray that took part during that election season, but no he definitely got dirtied. Oddly enough an asset used before (as he has been admitting in television appearances) is getting set up while during this time having been a hardcore supporter of the value of crypto and was a pioneer on Wall Street in bringing it to a much more common place well before just about any commonly known person in the finance world would even give it the time of day, let alone a full blown alliance-and he was spied on. Which begs to question, uber-powerful conspiracy rings are so inept that they can't even pull off a conspiracy do we get to call our substandard "non-mainstream media fully approved canned and packaged for consumption" ideas conspiracy theories anymore? Don't worry, there will be a name for it. The only people better than Trump at designing pet names for people who oppose them is mega conglomerate corruption propoganda news. Or as Trump has branded them aptly, "Fake news."
Which comically enough Byrne's side is that several campaigns were getting compromised in this process by the rogue actors inside Big Intelligence. Rubio, Clinton, Cruz, Trump are names that were named by Byrne in infiltrating and gathering blackmail info upon. Which takes me back to the coined name (just now) Big Intelligence, why are they never demonized like the media. I mean at least the evil mega-lo conglomerate "Big Oil" at least has share holders. Yep, evil people that own mutual funds actually. I don't recall seeing a ticker for "Big Intelligence," but judging by their power apparently in the political process now would be the best time ever to launch an IPO.

Supposedly, allegedly, however you want to frame it he was spied on. But not by just any spy. The spy that had a massive role in "Russia Collusion" allegation for Papa--(what's his name), you know, the story that amounted to really nothing but politically dividing the country for two and a half years and counting, the one involving the now most famous non-fictional spy Maria Butina. He resigns as Overstock CEO earlier in the day mentioning that the company could not go on with such a controversial figure. There was actually a post that I wrote a while back pleading for Patrick Byrne to take over Steemit and reform the fledgling social media based on the blockchain (there will be a link in the comments).

Anyways he has been up to this point a staunch supporter and developer of cryptocurrency/blockchain technology and has been a link to the ''stuffy business world'' in being one of a few people that do not have the rehearsed lines of crypto being "for criminals, a scam, a house of pain, pure speculation, not investment worthy," and so on. His stunning announcement of his relinquishing of his title at Overstock is the coda as far as we can see now to his development within crypto having heavily supported many crypto projects within his close watch including multi-million dollar investments in Ravencoin (RVN), which is where I kind of got the first whiff of what he was all about not more than about four months ago catching a youtube debate of his "in favor" opinion debate of Bitcoin nonetheless. Here is the link to his opening debate

) on Intelligence Squared Network of which I first started paying attention to what he had to say. Sorry I could not find the entire debate on youtube but it's there chopped up in pieces if you go to the above link.

So yeah, that guy claims (at least) he was spied on telling everyone who would listen over national broadcasting airwaves the end of last week (ironically enough on get away day for the press of the White House). Ad under the advice of a family friend who happens to be Warren Buffet-my favorite crony capitalist btw, he later resigns as CEO of Overstock bringing up his reasons which are quite remarkable to say the least for the sudden departure from the company he took over about 20 years ago.

Which brings me to the next point that may be even more controversial than an out of control "non-political" arm of the US Government perhaps spying on a CEO that just happens to be heavily involved in cryptocurrency. If so this would be strike two depending on which media circle you get your worldwide reality from after the Russian case that the media in the US has derailed the Constitutional Republic light years beyond what Russia's most ambitious and cagey eyed ex KGB agents in charge could've every dreamed.

The oint isisisisis stunning and I am sure about 30-35% of you will immediately disagree with me on this. Cryptocurrency=Donald Trump. Cryptocurrency=the opposite of what is going today. Cryptocurrency= the reverse of the status quo, the ability for the public to gauge value in other ways utilizing blockchain technology in transactions unlike ever before. Virtual tally sticks, virtual wampum beads, virtual coins, virtual tokens, virtual Euros, in easy conversion options and it's just getting started. Peaceful revolution when all other options failed, or the current state is so overrun by corruption and lack of the people's will being considered in the printing and exchange of the given currency of the day.

The comical thing to me is that crypto is not looked at favorably by US President Donald Trump. He has given multiple "canned Wall Street statements" describing it. But what he needs to do is look in the mirror and realize that crypto is staring right back at him. He is a part of the "crypto sentiment" that so many people in the public and media conglomerations cannot stand: "The unwashed masses telling us what to do? I think not. Here, waste the next few years talking about this until we come up with a better insurance policy next time around." The same thought of the status quo being "The Swamp," being unable to cleanse itself because of massive interest at the top of the economic foodchain it spits in the face of.

I am not saying individual people are the answer to these problems that crypto has come to be used as the tool of choice to solve any given problem or niche in society. In fact quite the opposite. Because as we virtually always see in life there are great people that stand out in the middle of great ideas, true innovation, real progress, and it's not the hustlers you see on television taking credit for it, virtue signaling, or self promoting their agenda (of self-advancement btw)... it's the idea and the virtues within the idea that is the real star of anything that is worthwhile. So while some of us were taken aback by Byrnes' story on Friday that changes nothing in the thought stream that he brings so much coherent thought within involving the root positives for a vibrant economy in the interests of all-in a better way.

I also wanted to shout out to aggy (aggroed) for "hitting the road" at his recent visit to what appeared to be a game hack, but I am having trouble finding the video interview he gave while there. Anyways he mentioned gifting to about 1,000 people there at the time of the interview to give them a taste of the game which is pretty stellar. Seeing him there, and yaba on the other interview with "The Good Ole' Boys," just kidding, I mean Wild West Crypto and at other shows is a great way to raise inclusion and get the kind of virality we all are hoping for.

And also in fantasy football news... yeah I know fantasy football is the least interesting thing in the world. I can't argue that very well. But in a moment of hilarity that I think you will think is pretty damn funny anyways I drafted Andrew Luck of the Indianapolis Colts, their stud QB of course a little earlier than I ever draft QBs as my 6th round selection (about 65th overall in a 12 team league) only to get trolled by the pick with one round left in the draft by a buddy telling me he retired.

"No F---- way I am thinking." I actually got into the Cal Naughton Jr. thinking mode of Ricky Bobby "passing you," during the race scene at the end of the movie Talladega Nights, then they say on the radio--"no he literally just passed you that's him on your other side..." in the metaphysical sense when reading on the chat board for the draft "Your Andrew Luck has retired"

I literally drafted him a half hour earlier in our draft and whoever took him was going to get stuck with this because it totally came out of left-field (to steal a baseball pun here) and zero news to the betting public--uh, er, I mean 'fairweather fans of given skill position playing individuals on certain weeks.' What did I do? Told my dad and brothers, who got a good laugh and so did I. I mean really people this kind of stuff doesn't just happen. Maybe it's an omen. Last year with my second to last pick I drafted a QB and it was Patrick Mahomes, so that worked out well, hopefully Jimmy Garapolo strikes paydirt this year as a serviceable QB with my last pick. Just keep hitting my boy George Kittle (who I passed on btw to take Andrew Luck) "Jimmy G" and we may sniff the playoffs this year. Your 49ers won't Jimmy, but I am talking about my *Fake News Bearh a
CUE THE CARLY SIMON MUSIC--(Opening Piano line...)defense first mindset drafting Chicago's Defense way too early. Yes fantasy football sucks and I deserve this 1 on a trillion retirement in the middle of our league's fantasy draft to go down jcenter>

Here would be the previous post I (mockingly) asked Byrne to do his magic at Steemit--Which he still can do I mean is he really that toxic for this place considering other things going? And how about that Austin Powers spy inspired dresswear? https://goldvoice.club/steem/@cryptkeeper17/ceo-of-overstock-com-patrick-byrne-steem-is-in-need-of-a-takeover