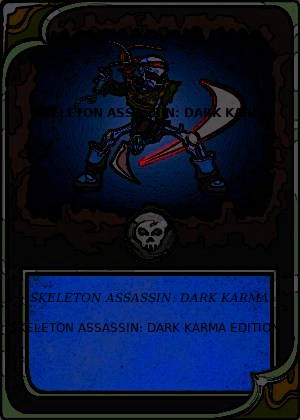 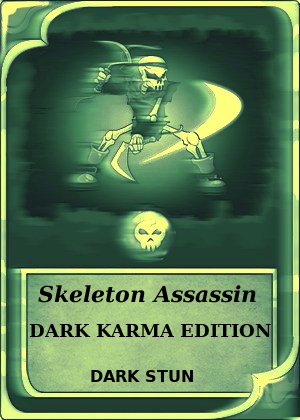 Forgive my crude mock up of these cards, this is of course best left to the professionals. This is not a thing. I would love to see something like this become a thing. Dark Karma Cards would be an absolute literal game changer for this game, and yet again create avenues for game play strategy and management of resources depending on the importance of the match or the relative wealth (or level of frustration or impatience point) with any given player you are battling. Without further stalling here's the initial dive in...

We all know at points in the game there is an a bit of an abuse of playing the "Meta Lineup," or the supposed "nuts," to use a poker term with a similar vernacular and context in that realm. At the moment there is little to nothing you can do about this unless you just hope to battle on, hope the RNG luck can fall your way for the single match sample size, then move on-hopefully against another card, lineup, splinter, or whatever. But there are of course times where that is not the case, and those of us on the lower rungs of the food-chain can't quite muster the resources to chase down some of these premium cards at their given elevated status. But with this Dark Karma card concept, not so much.

The card would work on the story line that despite their ferociousness, these monsters (or virtually all of them-more to ccarries. They are so terrified that it causes a stun and/or poison with their physical bodies breaking down due to the stress this energy carries and impresses upon the given monster. These effects are so drastic that they have to be accounted for in two new abilities of which are not curable even through the modern cards, but will have to be taken on by the mad scientist yaba at some point to create the immunity/cure for this malady later on. This we a fundamental "achilles heel..." They are terrified of their doppleganger and the energy it carries. This would be represented in the implementation, at some point, of DKCs to be introduced to the masses, at some point, as an insert, a reward, guild play payout in packs of these, or something the creators would come up with.

The effects of the card would be very simple. There would have to be another spot introduced prior to the match where cards are played (or another idea on that later), with a limit to the number of cards you the opponent have available in capture rate. For every 20% in capture rate you have the opportunity to play one of these cards. So if you have 100% capture rate you can play up to five, 80% you can play up to four in the match, 60% up to three, and after that zero, 60% being the minimum capture rate to play these cards.

If the DKC is played, and that card is in the lineup, something will happen. The DKC cards would have one of two abilties (to begin with-who knows how much further it could go after that), one of them being Dark Stun. This ability would render the card pictured, if it is played in the opponent's lineup stunned for the first two rounds of the match. Now, if two of the same card is played, then it would be for the first four, and so on. The other ability, Dark Poison is another ability that would be apparent in poisoning the opponent immediately when the match begins. The only counter to either of these would be Dark Cleanse, yet another ability that would have to be introduced to mirror the ability of cleanse as it is currently.

This proposal would include nerfing only one card in the deck that can counteract at the moment until entiree countered j are created... The Angel of Light. This ability woulire nerfing process to the pro dnd would be able to be combated just the same as cleanse is now. I would leave the entire nerfing to the pro developers on that one, the above was just a suggestion of coursee a boxed lineup to

These cards could also be introduced in another respect also without having to create a whole other box to play cards and could actually be created as zero manna cards to be included in battle as is, where they would carry no health or attack abilities just be more of "spirits left on the battlefield," and when there are no other monsters on the battlefield they are also done, and the opponent will have won the battle.

Ideally these would be single use cards, or have a timer on them, to where they are around for say 24 hours, then they expire, or one, single use, however again the pros decide this card subset concept would proceed. I think this could introduce some dynamics in the game as lack of predictability would carry a premium to a point. No longer is the strategy to play what we think as the Meta lineup will necessarily rule the odds of winning, as cards could be rendered either stunned and/or poisoned out of the gate. Every single monster would be represented in the deck, and I would propose equally printed numbers of all of these cards printed.

This could also be done with summoners-having one "de-buff" ability per card when the card is guessed correctly to be played by the opponent according to the ability on the card. So to offset totally a legendary summoner you would have to have a DKC with each ability pictured to offset all of the opponent's buffs for that summoner.

If it were me I would use these cards as a "multi-issue" going forward. Meaning, in the future have X number of them in every booster pack, include them in rewards, include them in packs in guild rewards, and yes of course make their burn value an option versus keeping them or burning them for the short duration they would play. They would be like the seasonal bug that lives one day, does their thing and is gone after that. But of course you would also have to include a burn feature where you could burn a DKC card ell?

Thkens as well to burn these tokens as the game moves on (or for that matter any other steem-engine token)?** The Splinterlands game brings more possibilities at every turn due to open minded creators and in this instance would of course be that in a multitude of possible implementations to the game.

This all sounds like a programming nightmare but a player's dream in my opinion. There would be much reconstruction to the game but it would become fresh beyond belief and would create additional reasons to purchase booster packs going forward, a reason to finish high in guild play, winning in league play during quests, and dropping an unpleasant surprise to your tournament opponent that allows these cards in the rule set.

I want to thank you for giving this article a read and I look forward as always to your comments below.

Interesting concept. As any new ability moves the current state to a new equilibrium, the introduction of cards with new abilities should be extensively tested.

Yep absolutely @hotbit, I would of course leave that up to the mad scientist yaba in his monster testing grounds to come up with the values of all of this stuff of course, he's nailed it so far.

This is interesting but also a nightmare (like you said) for a new players 😂😂 OMG.. thinking about how much energy we need to track that single use cards. It's like a joker isn't it?

It could be @cicisaja. The thinking on having it be a single use card, whether valid to play for 24 hours or no time limit (which no time limit would likely be easiest are more simple) is that it would counteract the single card that is pictured, so on the example above, let's say the skeleton assassin DARK KARMA card is played in the same match that your opponent played a skeleton assassin then the card would either be stunned or poisoned, depending on the ability on the DARK KARMA card. If the opponent does not play a skeleton assassin and you use this card then it is used up and it doesn't affect the battle and is burned forever, or is only valid for the remaining time period if there is a timer on the card. There could be a DARK KARMA ZONE Card, where you would get a joker type of card for a position in the opponent's lineup for that given battle, and then the ability on the card could take hold. That would actually be a lot more simple too. The production of the furthest back would likely be the highest, then halved by the next spot, then the next spot, so that everyone wouldn't just drop this zone card on the other person's tank, at least without spending a very valuable card, especially when you are doubling the rarity each space you move forward in the lineup from back to front.

But.. How about the distribution? Im afraid that only those who can purchased hundreds pack would get it.. and it will be a contra-productive if that kind of Karma used in a tourney.. becausr you know, that kind of cards will really usefull in tourney rather than the ranked

Good point. I actually recommended having these cards being cross distributed in booster packs, single player rewards, guild rewards, or in mystery reward potions--across the board in all ways how cards are distributed.