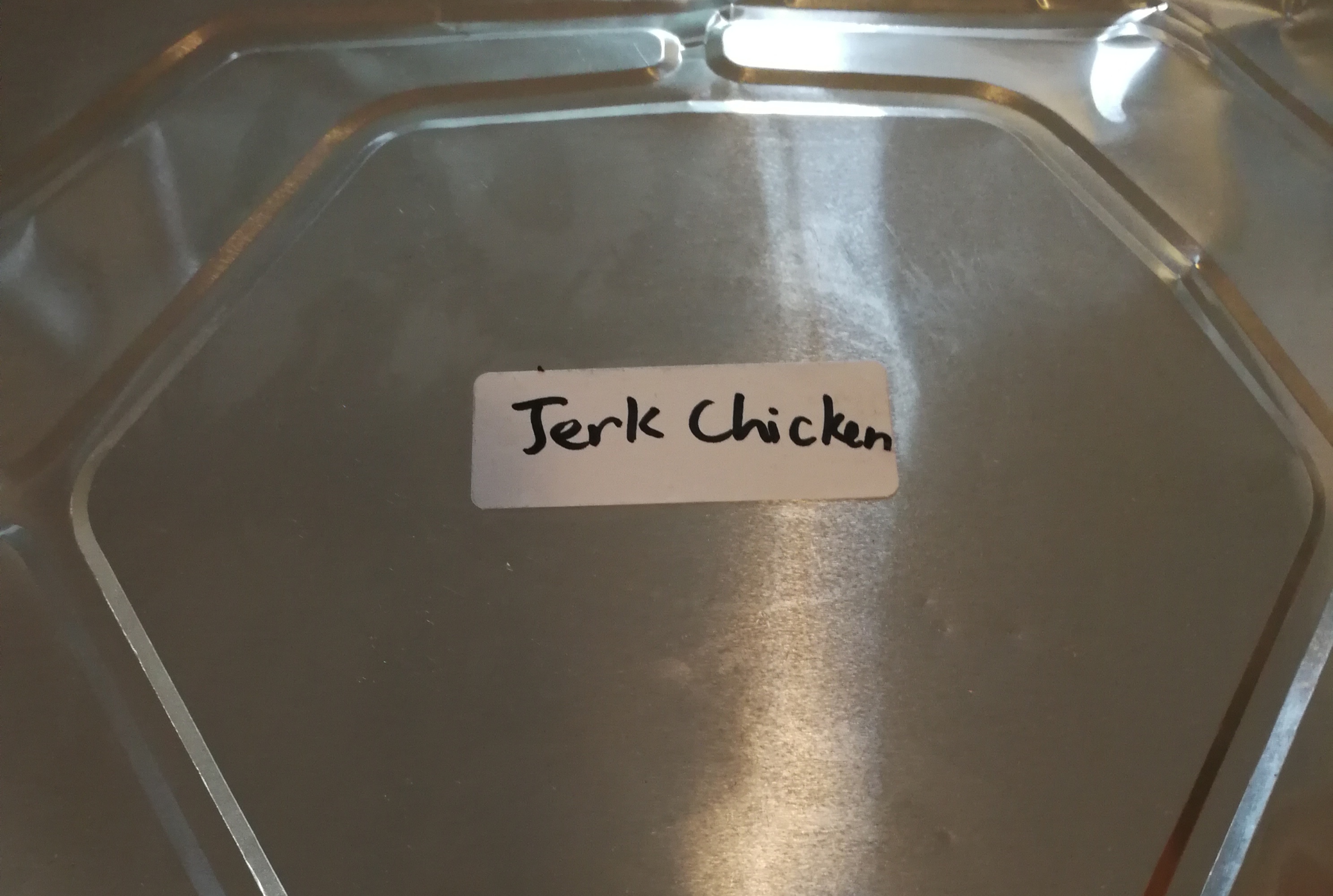 We had a professional development day at work today and lunch was catered. It was from a new place that serves Jerk Chicken and I didn't get the name. Pro Tip: if you own a restaurant and someone places a large order, you should include some flyers or business cards so people who like it can order again!

They went through the hassle of labeling it. There were two trays of boneless Jerk Chicken, a couple of trays of Rice n Peas and a tray of coleslaw, even a blind man with a runny nose could have told them apart. They provided an extra container of jerk sauce but I was a little disappointed there was no hot sauce. I'm a huge fan of all things spicy! 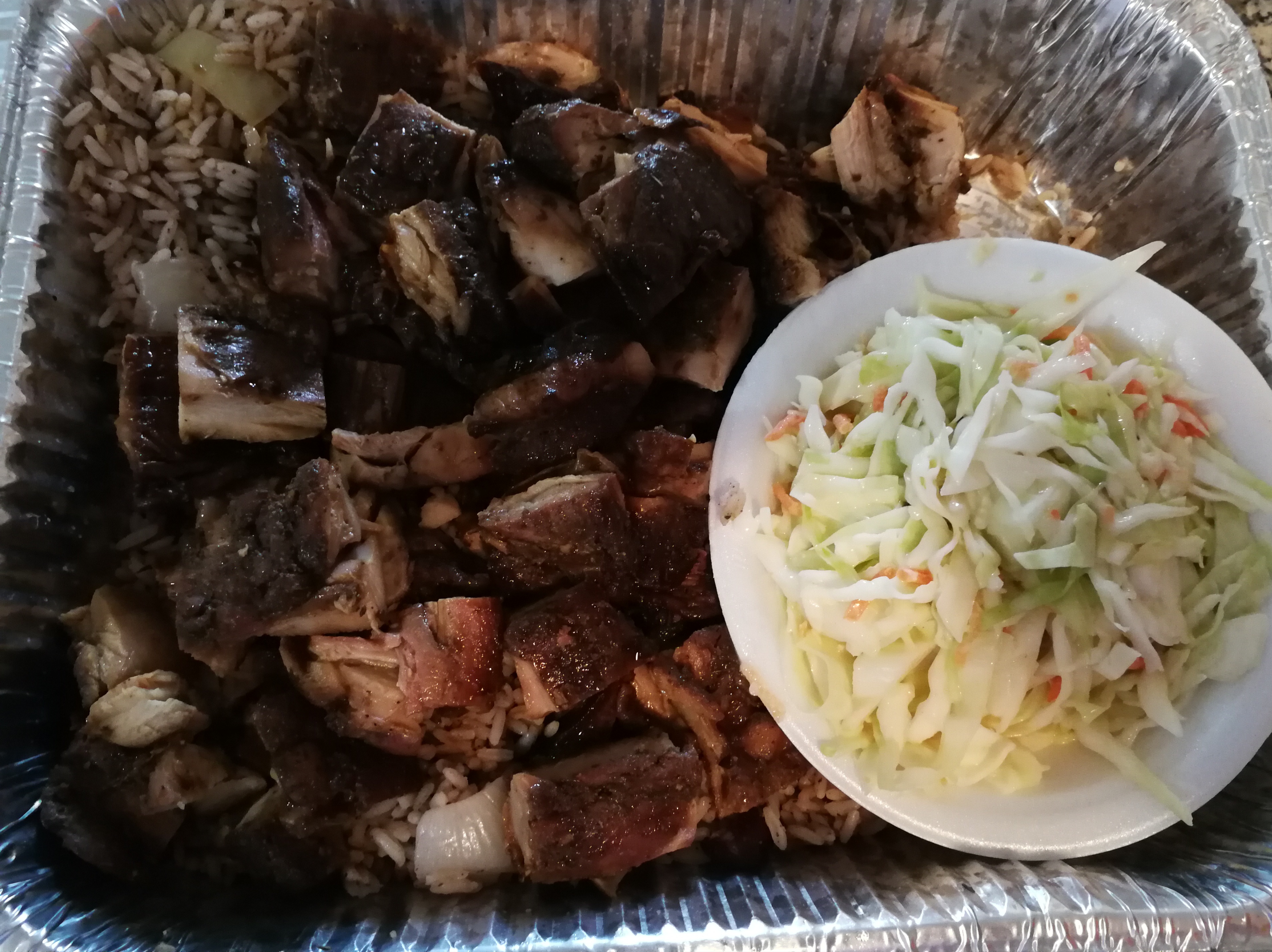 It wasn't the best Jamaican food I've had, a solid 7/10 probably because they cut it up and took out the bones. Gotta leave that in, it adds flavour and keeps the food from going dry. The rice was alright, I normally eat it straight away and not after it sat in a container for 20 minutes. The coleslaw was fantastic and the best part of the meal. Took some home regardless because 2x more than necessary was ordered and I hate to see food go to waste.

There's a lot of Jamaican restaurants and food in Toronto and I plan on doing some more reviews. I'll get the name of this place tomorrow. I am sure they had a much better menu and the colleague who ordered it just wanted to keep things simple and not so messy since we were not in a proper lunch room.

The best thing about it is although there were about 20 people for lunch, none of them had Jamaican backgrounds and most seemed to enjoy the food. It got me thinking, what's a better way to promote culture, Food or Music? It's a tough choice made easier on an empty stomach.

Man they took out the bones LOL... Can't believe they didn't even put a flyer. Hopefully they ran out. Hmmm the food is definitely a major driver here in Japan, but without the music many wouldn't know about the food. They go hand in hand.

Maybe the person who picked it up didn't take any, either way, they didn't convince her to spread the word. Not a huge fan of Japanese music but they do have some great food and an excellent culture (asides from the imperial phase). Jamaica has the best of both worlds.

Ah I meant the Jamaican food and music here.

Easy enough to make if there aren't any decent restaurants around. You just need the spices and a recipe. One day I hope they add a recipe section to ReggaeSteem, there's too much info available online.

you are not all vegetarians I thought you ate vegetables for what I read Jamaican food is delicious I want to try the stews .. I hope to go one day ..

Got my taste buds going!
I ran an education project years ago where we provided lunch and supper. We had a Jamaican housekeeper who provided a great range of food, which became the big draw for the project. We were financed to provided thirty places, one year we had 164 adults and children and a waiting list. The food, and the culture around eating together completely changed what was going on.
Some restaurant reviews and recipes would be good, @jluvs2fly did one a while ago, I'd love to see more.

I want to taste the jerk chicken someday. You are lucky man. Thank for sharing with us. Regards

Your post was upvoted by @steem-ua, new Steem dApp, using UserAuthority for algorithmic post curation!
Your UA account score is currently 3.768 which ranks you at #5269 across all Steem accounts.
Your rank has not changed in the last three days.

In our last Algorithmic Curation Round, consisting of 118 contributions, your post is ranked at #109.

@ocdb is a non-profit bidbot for whitelisted Steemians, current min bid is 2 SBD and max bid is 10 SBD and the equivalent amount in STEEM. Check our website https://thegoodwhales.io/ for the whitelist, queue and delegation info. Join our Discord channel for more information.

To view or trade BEER go to steem-engine.

Hey @crypticat, here is your BEER token. Enjoy it!

@crypticat, You are right when people take huge orders then Restaurant should use the opportunity and should add promotional aspects to their services. Hope that you enjoyed your time.