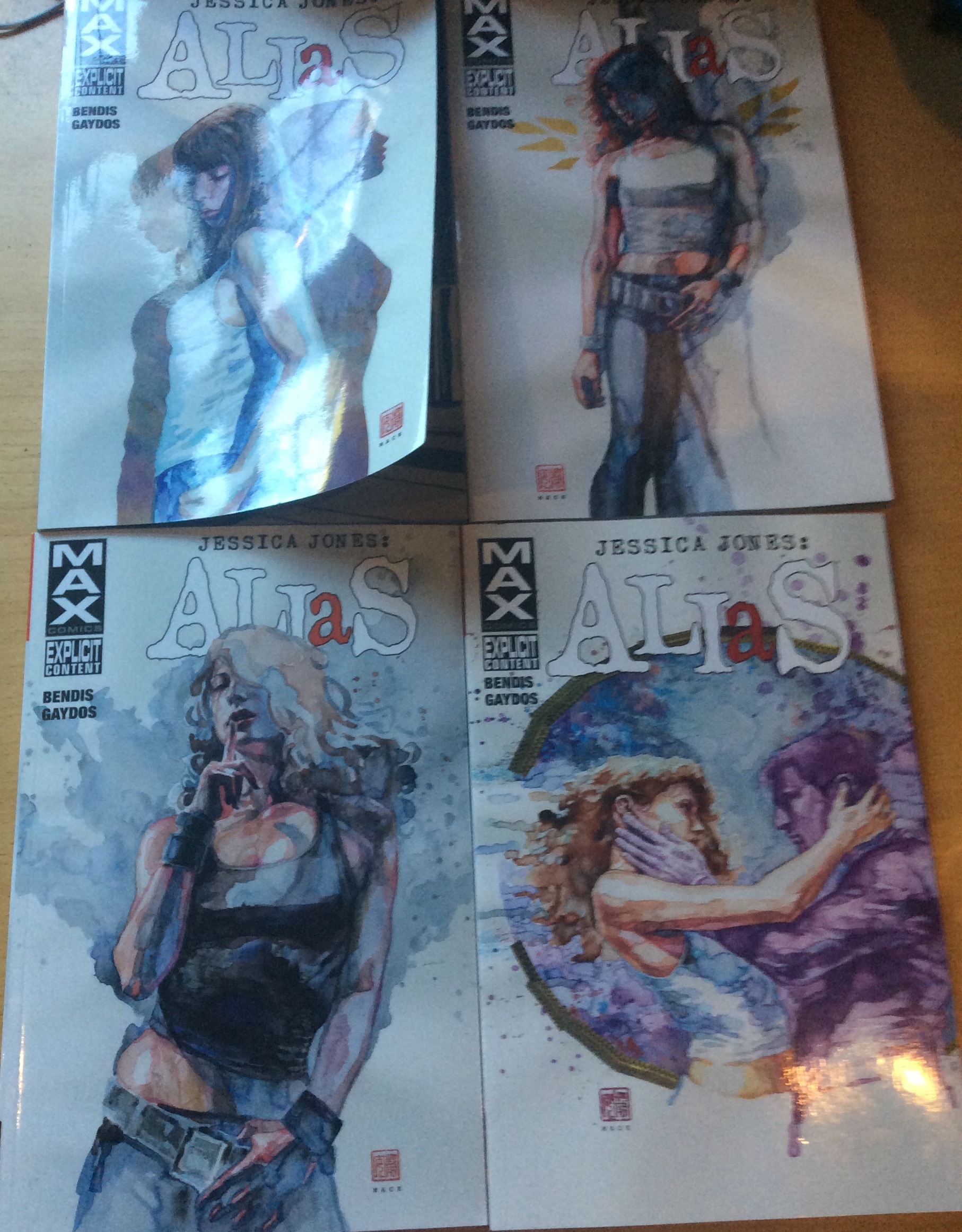 In the late 90s, Marvel launched a new imprint called 'Marvel Knights', aimed at and older audience than the majority of regular Marvel comics. Daredevil and Punisher were some notable characters among the first wave of Marvel Knights comics. Then, in 2001, Alias was the first comic released under the 'MAX' imprint, for adult readers only.

Alias ran from 2001 to 2004, with all issues written by the now (in)famous Brian Michael Bendis, with art by Michael Gaydos and stars Jessica Jones, ex-super hero, ex-avenger, foul-mouthed private investigator with appearances from other superheroes and other comic characters.

Alias is obviously about Jessica Jones, but I was surprised to find that this series is actually very entrenched in Earth-616 continuity. I had thought that the MAX series were in a different universe and it seems most of them are. In Alias, however, we see  a whole host of fan-favourite characters like the Avengers, Scott Lang, Carol Danvers, Luke Cage, Matt Murdock, Ben Urich and even Peter Parker! A character from the first few Amazing Spider-Man Vol 2 issues is even in this comic! I'm a sucker for comics referencing each other so I really liked this aspect of the series.
Jessica is a clear highlight, but I loved how Carol and Scott Lang were implemented in the series. After a particularly stressful case, Scott calls Jessica for a date after Carol suggests they get together and instead of telling him to go away she asks if he could just listen to her as she drives home. This was a really sweet moment and highlighted how Jessica wasn't just an angry, tough, no-nonsense investigator. This is also highlighted in her interactions with Luke, especially in the last arc when she is talking about how she was under the control of Killgrave for eight whole months. I also really like her friendship with Carol Danvers as it sort of 'anchors' her to the Avengers and gives Jessica someone to trust.

What's immediately striking to me about Alias (aside from the plentiful f-bombs throughout) is the creative panel layout. Every time Jessica is interviewing a new client there is a small panel of Jessica repeated across the page and a big panel of the client, zooming further in on their face each time. One of my favourite scenes is in a police department and has many alternating panels between Jessica and the cop, crossing over a three double-page spreads, adding to the intensity of the scene.

Michael Gaydos' art is fantastic and complements the story very well. His faces are very expressive and thus allows a wide range of emotions to be powerfully portrayed. Bendis and Gaydos are really good at conveying back-and-forths between two people and highlighting their shock or anger. Issue 10 is a very unique one and has an absolutely beautiful artstyle.

Alias consists of 28 issues with 6 arcs and 2 one shots. The first arc, Alias Investigations works as a great introduction, showing us Jessica's typical day-to-day routine and interaction with clients (the first scene is particularly good at this) and also showing that Jessica's world is very much connected to the Avengers' world.

B-Level shows Jessica on the hunt for Rick Jones, who seems to have gone a bit crazy. There are a lot of crazy plot twists in this arc, it was very engaging and shocking to read.

Rebecca, Please Come Home is one of my favourite arcs. It has a very poignant depiction of family and mutants in the marvel universe as well as a great portrayal of school students.

The Underneath is also great. It has a lot of shocking moments in it, and highlights the disgusting acts that people can do, but it left a bit of a bad taste in my mouth. That was the goal, I'm sure, so it was excellent for what it wanted to be, but one moment in particular left me a bit hollow.

The Secret Origin of Jessica Jones is a great look at how she got her powers and I love how the artstyle changes to mark the end of the silver age when it takes place (or her innocence?). Cool link to Amazing Fantasy #15 too!

Lastly, Purple. This arc was very powerful, and I really like the first issue, as the utter shock Jessica feels when she hears the name Killgrave again is heartbreaking. I was a bit disappointed in this arc having watched the Netflix show first, as I expected more Killgrave in the present. The comic book version is absolutely fantastic for what it is, but I would have loved to see Killgrave return for more than a few pages.

I also really like this series overlaps with Bendis' Daredevil run. We see Jessica as Matt's bodyguard in this and the Daredevil series. I like how it all connects up.

Overall Alias is a tremendous series, tightly plotted and incredibly engaging. It's one of my absolute favourite comics that I've read so far and I highly recommend it to any comic reader.

Alias is completely readable the whole way through without anything else but it added a lot to my experience when I read Daredevil alongside it. If you want to do this then this is the order I used:

(Sorry for the dodgy picture quality throughout, these aren't on Marvel Unlimited, so I don't have them digitally available).