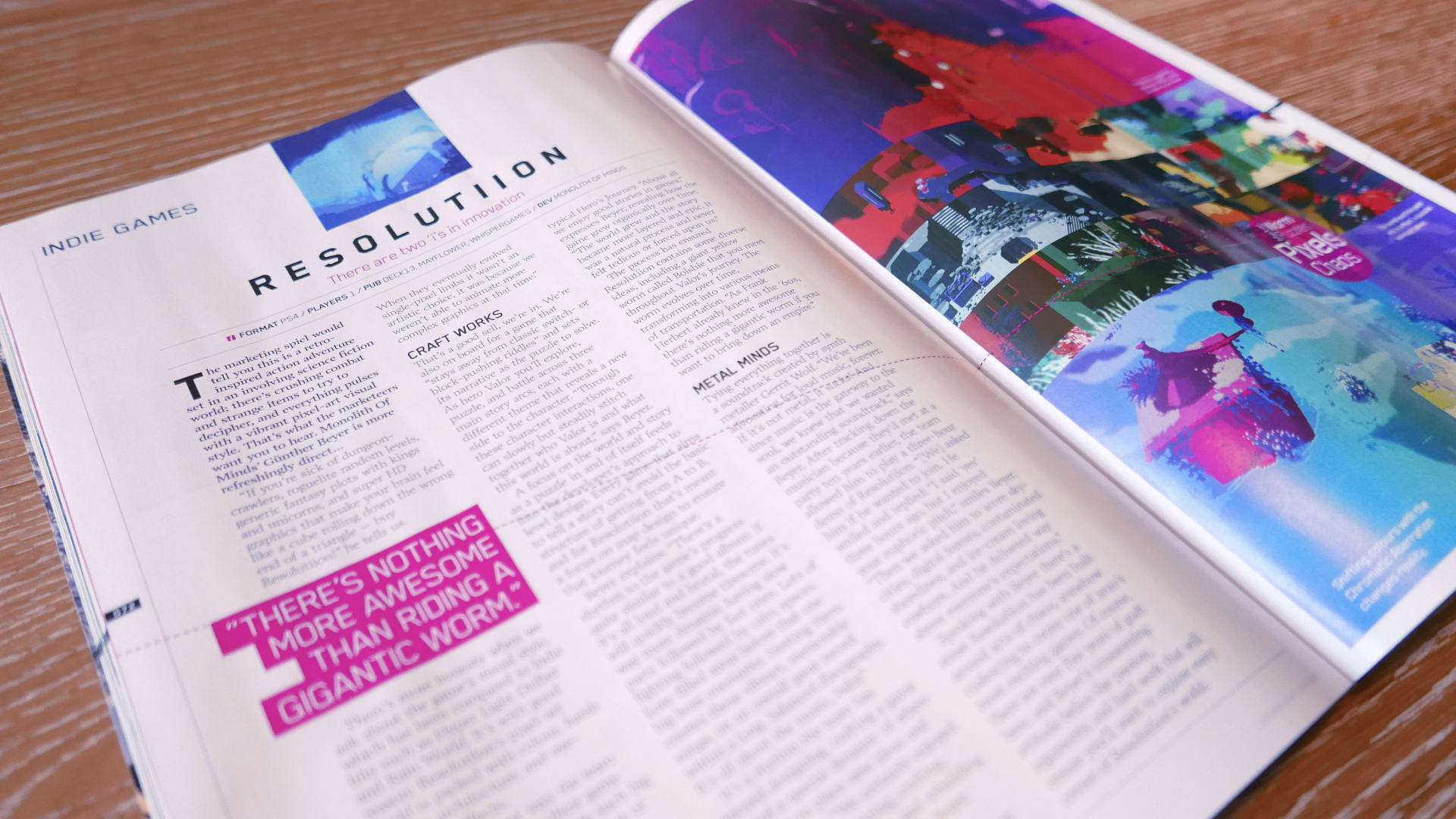 Excerpts of this interview were originally published in Play Station Official Magazine UK in January 2020. This is the full interview, where we talk about all things Resolutiion and how we worked through the chaos of indie-gamedevelopment.

What is the elevator pitch for Resolutiion?

If you’re sick of dungeon-crawlers, rougelite random levels, generic fantasy plots with kings and unicorns, and super HD graphics that make your brain feel like a cube rolling down the wrong end of a triangle — buy Resolutiion!

The more marketing-friendly version might be: Resolutiion is a Zelda-like action-adventure set in a layered science fiction world, filled with fast combat and weird items, all wrapped in modern pixel-art and an amazing soundtrack.

What inspired the visual design of the game?

That’s definitely a topic we have to address: Since the launch of Resolutiion’s trailer a few weeks ago, we’ve received plenty of Hyper Light Drifter comparisons — which is an amazing compliment. HDL is one of the best looking pixel-games of recent time. On the other hand, such a comparison is quite intimidating, because it means that our little game will be measured against that sky-high bar.

Of course, the Drifter, Sword & Sorcery and Rain World have been great sources of inspiration; but at its core, Resolutiion’s art style came from none of them, and evolved from our lack of experience and capabilities. When we started sometime back in 2015, we had no idea where this idea would be going, or how it should look and feel, because we were learning everything from scratch. Initially, our characters were just blocky blocks of blocks. When they eventually evolved single-pixel limbs it wasn’t an artistic choice, it was because we weren’t able to animate more complex graphics at that time.

In early 2018, Chris Rafferty joined the team and helped to refine the visual design with his unique style: plenty of polished animations and layers of details.

Do you have a favourite boss, item, or puzzle, and why?

As we’ve worked on this project for more than four years now, almost everything has developed some kind of character or a special relationship with something else. Selecting one thing that stands out as our favourite is virtually impossible, as each item fulfils its role, be it the most versatile, the most offensive, defensive or the most stupidly fun.

We tried to stay away from classic switch- or block-pushing riddles. The real puzzle, though, is Resolutiion’s lore. We very much enjoy how our story unfolds as the player progresses: there are three main arcs, each with a unique theme revolving around a lead character. Through these character interactions, one can slowly but steadily stitch together who Valor is and what this world is about.

Our favourite boss is God, for obvious reasons.

Can you tell us about Bolshie the Worm, what is it and how does it play?

Bolshie is a yellow zombie worm. He ain’t doin’ interviews, and he certainly does not play!

Let me try to wiggle around major spoilers: Bolshie emerges from Marty’s letters — a forsaken girl, alone and hurt, deep in the Mechanical Mines. You will meet both multiple times throughout your journey, with Bolshie transforming into various means of transportation.

As Frank Herbert already knew in the 60s: there’s nothing more awesome than riding a gigantic worm, if you want to bring down an empire.

How does being brothers affect the game’s development?

We’re twins, so that means for the most part we’ve grown up with similar influences — but were also compared to each other all the time. This lead to many fights around developing our own identities, but also created a valuable kind of honesty and communication.

Twenty years on from those formative times, nothing much has changed.

The first years of Resolutiion’s development were a constant minefield of opinions, arguments and a struggle for dominance. We are both stubborn Germans, and establishing an understanding and sensibility for logic, mechanics, storytelling, world-building, art and sounds lead to many, many arguments. But since we are used to this, we never skipped those fights. We worked through them and came out on the other end with figurative black eyes and broken noses, but a real understanding of the inherent problems we faced.

Do this a thousand times and you end up with a bloody cool video game.

How would you describe the game’s soundtrack?

Remember the good scene in The Matrix Reloaded: fighting the Smith clones or the highway chase? The best thing about those scenes was the music, right?

So, we’ve been advocating for loud music, forever. If it’s not metal, it sucks! And since music is the gateway to the soul, we knew that we wanted an outstanding soundtrack. But as naive beginners without any money or credibility, we had no idea how to approach this space, let alone find someone good enough to help us flesh out roughly fifty tracks for an unfinished game.

We experimented with some friends and bands for the first two years, but never got anywhere solid. Eventually, I recalled a conversation from ten years earlier: I had met a musician at a party, who complained that he couldn’t find a game-dev-team to contribute some sounds to. After tracking down Gerrit, we met, talked, played the demo for three hours and asked him if he wanted to join. He smiled and replied: “I said ‘yes’ three hours ago, but I enjoyed your euphoric pitch.”

Then we asked him to score sky-cities, digital forests, contaminated shorelines and ice-cream loving cowboys. And he delivered way above everyone’s expectations.

‘Indie’ as the short form for ‘independent’ barely has any meaning anymore — independent of what? Money? Tools? Pipelines? The word is used way too often by big marketing firms, describing everything from solo first-time developers working in their free time to thirty-people studios with twenty years of experience.

The tools to create quality content of any art-form have become so good and widely accessible, these days anyone who has the passion and is willing to put in the time and effort can create something beautiful — music, film, writing or in our case, video games. You no longer need to pay or convince a big production company (or any other kind of gatekeeper) that your project is worth being made.

People love underdogs and explorers they can relate to: the lone hero versus the evil horde of goons and villains. And there are certainly some real indie-heroes of the past and present. But most smaller studios can tap into large support networks of stores, marketing and learning resources with barely any effort.

Therefore ‘indie’ for us means just ‘not the biggest guys around’.

Did you realise how much work goes into making ‘depth’ in a game’s world and story? Do gamers take a lot for granted?

Yes, because above all we enjoy good stories in games. You can quickly tell if the writers were able to pull off a story worth telling, or if the “naive, young hero turns out to be the chosen one and gains superpowers to rescue his village from the world-devouring evil from space” … yawn.

Then again, Resolutiion started as a very small project with a much smaller scope. Initially, we planned to be done within a year and were aiming for about an hour of gameplay. Month after month levels got bigger, characters were added, and items, NPCs and objects found their way into the universe. The world grew and the story became more layered and epic. It was a natural process and never felt tedious or forced upon us.

Somewhere in early 2019, we realised that we need to actually ship this clusterfuck of ideas and mayhem one day, so we started to cut out redundancies, and boring parts, we fleshed out themes and rewrote characters to tie into each other’s narratives. It was a pretty painful process because so much stuff had to go. Good, awesome stuff. But it’s necessary, and we’ll continue killing our babies until Resolutiion ships in 2020.

And yes: gamers take these things for granted, and that’s a good thing.

What’s the dirtiest joke in the game, and who’s idea was it?

That would be Mr P.

For some background: when designing enemies, at one point we had plenty of small, flying creatures as well as humanoid ones. We wanted something fresh and tried to approach it by looking for interesting shapes.

Enough spoilers, already: you will have to find out for yourself.

How much fun is map and encounter design? Has everything you wanted been included?

“I am really bored of squares.”
said the pawn to the knight,
moving from black to white.

Telling a good story is almost always about getting from point A to point B. So the largest part of Resolutiion’s development naturally went into map design. There’s a rhythm to the game’s progress quite similar to a good album: if it’s all loud and brutal, the tunes will quickly become tiresome. It’s way more dynamic having slow parts followed by fast ones. Lots of fighting followed by calm spaces. Lore-filled areas before that one big boss encounter. Nesting them creates these vibrant, memorable songs, on overall great record within a long, balanced discography.

It’s all about the music, baby.

This rhythm eventually determined how we designed the whole game and where we put ideas and interactions. And we certainly enjoyed all the brainstorming, crafting, arguing, destroying and rebuilding of each little beat.

Agreed, there is nothing more awesome than riding a giant worm. This is a fun read :) I love the music/rhythm analogy for game pacing, that is perfect and something many games could have used slapped across their faces. Your game sounds awesome. Good luck!