Education as a fundamental pillar in the preservation of the environment and the human species. 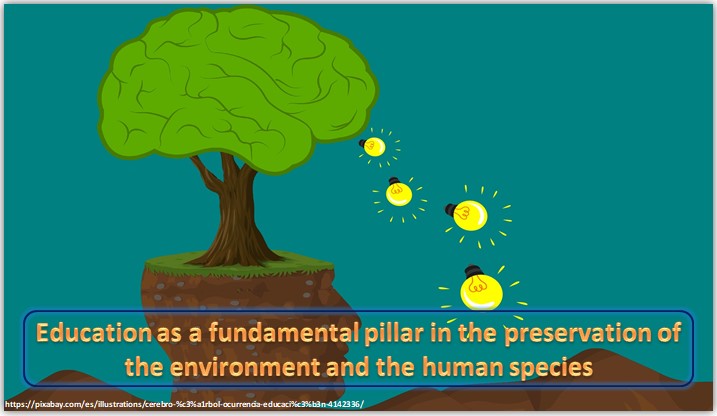 Greetings to all readers of this great platform, in this opportunity I want to share with you my personal opinion, in regard to the fundamental role that it plays in today's education in the preservation of the environment, by using this education in each of the levels of education can save the human species, and the planet in which we inhabit each of us.

In the last 2 years, the amount of pollution that is being generated in the planet fell, this is mostly due to the bans that were generated due to the pandemic, with this many factors, pollutants, they managed to decrease its amount of emission, with people working from home, reducing the amount of vehicles that could be circular, and many other changes.

With the planet going back to relative normality in the lives of people, the amount of pollutants increases again, and with this, he should get new plans that manage to generate awareness in the people who are part of this planet, which must be generated from childhood through education, and this begins with the home as such.

To execute curricula at all academic levels, managing to increase people's awareness based on the preservation of the environment, taking some subjects that teach topics related to this type of content, such as environmental issues, recycling, the use and classification of waste, as well as the use of non-polluting transport that can help the planet.

In recent years, large entrepreneurs have begun to implement methods of environmental awareness, educating each of the workers, as well as the implementation of technology that helps the environment, on the other hand, the manufacture of electric vehicles has been implemented in greater proportion, thereby avoiding the emission of gases into the atmosphere.

In Venezuela, there is an area where comes the lightning of the Catatumbo, being one of the greatest healing of the ozone layer in the world, currently education in Venezuela is being guided to preserve each of our natural sources, which can generate a great benefit to mankind in terms of improving the quality of life of the people, in regard to the planet where we live.

All the images used by the Author @Chucho27 are Public Domain, in each one of them you can find the source of the image.
The image of the Banner at the bottom, is in the public domain obtained from: PixaBay