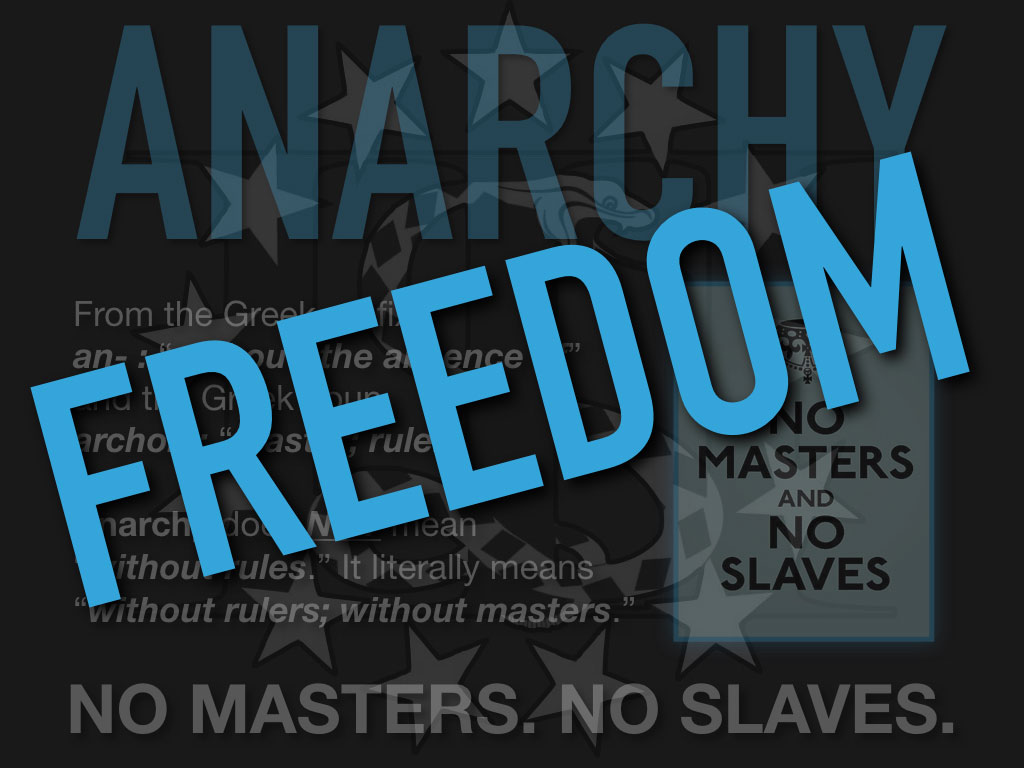 THE TRUE MEANING OF FREEDOM

If you tell a people, “No Masters and No Slaves,” and ask them what is the first thing that they think about, what they will tell you is that they think of Freedom. Because that is what anarchy really delegates, is FREEDOM, from being over-run with injustice and unjust laws and actions of immoral men upholding a title to your life through coercion, with the obtrusive use of many Laws in order to Break the human spirit. Anarchy simply put, means FREEDOM.

The fact is that we need to live and exist in a world that does NOT hold the value in having a SLAVE class and a MASTER class of people. OR A RULED CLASS and a RULER CLASS of people. People are already living in society that upholds the Natural Law, because it's the Laws invested into us by creation, and the only way we will ever get to a place of TRUE FREEDOM is by upholding to those Laws, and Natural Laws, by being morally obligated to do so, and taking back the freedoms instilled in all of us. Yet, without a people acting in a morally obligated way, we continue into the perpetual Slavery that exists still to this day through coercion and violent oppressive behaviors coming from the men and women comfortable with the lie enough to continue their paths of creating tyranny. We've had whips and chains, hard-ball and shackled feet kind of slavery right here in our very own country, and even full on physical and emotional enslavement and somehow we're just blind to see the kinds of slavery that still exists today, because it's not happening to us, so people don't usually try to get too emotional enough to process their own enslavement – over fear of it affecting them in such ways through fear of what we're holding so near and dear to our hearts.

A lot of the hard work and a barren broken display of slavery is what built the infrastructure of society today. We're not in this state right now, but this kind of slavery in this country isn't all around us, but we're going to move towards it again, and it's bound to be a complete and utter joke to me if none of you would be the voice of reason enough to stand up against it – even though, even the most protected in their crimes feel the call in those same ways to this voice of reason. These people do nothing or it's not enough and the efforts made aren’t doing anything at all. We're going to keep getting involved in this kind of slavery because we've allowed the soft form of slavery to exist in the name of “Government” and allowed for it to continue to harass people and abusing the rights of individuals from all around the world and even right here at home. If we can allow for all this to continue, what on earth are we going to see taking place in this country, if we can't stand up to it, and get the hearts of men pumping on a level that you know so deeply means everything to us, because we know what we're living today is a complete farce, and a LIE. You're living a LIE if you don't believe in what I'm saying here is true. Because it's TRUE to me, and it’s true to MANY, MANY others... that we've had it with what we're up against and we're sick of the absolute bind on our human spirit and our integrity to move forward, towards a world that has much better things to offer humanity than that of a complete and utter failure in my opinion of what a REAL humanity might look like, had we stripped all these euphemisms off of us and just started at the very ROOT of everything GREAT. Hell, I don't even think people know what it MEANS to be GREAT anymore, or to harness a FREEDOM in their hearts enough to see the bigger picture here.

The bigger picture is that this world is Gods picture, but I don't think people are even spirited in that fashion enough to see it as such. No, I think you've lost your courageous selves a bit too hard and you're too fake and shifty to assault the minds of men, or to provoke them into feeling the spirit of true and honest LOVE. But, damn it, are we too late? Is it too LATE to live in a MORAL WORLD or have we LOST the human integrity to speak up about such things and hold VALUE in that kind of MORAL WORLD? In this country, I think men have lost their grit and that life has been utterly molded in a way to harness this kind of confusing behavior of people as we move towards this “Reformation” that wants to take place. We want a new peaceful revolution that’s being made impossible.

I don't think people know what they have got to give until they realize what they can lose if they don't give, and then decide to give it, and to give it all that they've got. Because some people are giving a whole lot into it being a fact that they have nothing to give, and give nothing, simply because they believe that they don't have anything more to give or bring to the table. But this mentality is wrong. I've seen homeless people give more than the rich, and the rich people giving far less than what they could. I've seen everything in between as well. But mainly, I've seen a lot of greed where giving could have been present, and where – if you asked me – kindness and compassion should have been presented but wasn't. The fact of the matter is that it's a perpetual state of Slavery that we're living today, and the occult is highly in favor of keeping their banks and corporations happy while ensuring that people are not going to live as though they ever had anything left of themselves to give, because it's all being taken away from them, and it all comes down to the unfair practice of Slavery.   Slavery is the problem, and there is no cure for it besides educating people to become morally obligated to do something and standing up in the face of those oppressors. It’s up to people to make sure that we educate people on this information and put people into their place when we see something going on wrong.

To Read Onto The Next Section Of This Blog Series ClickHere Thanks! SOURCE: clickhere