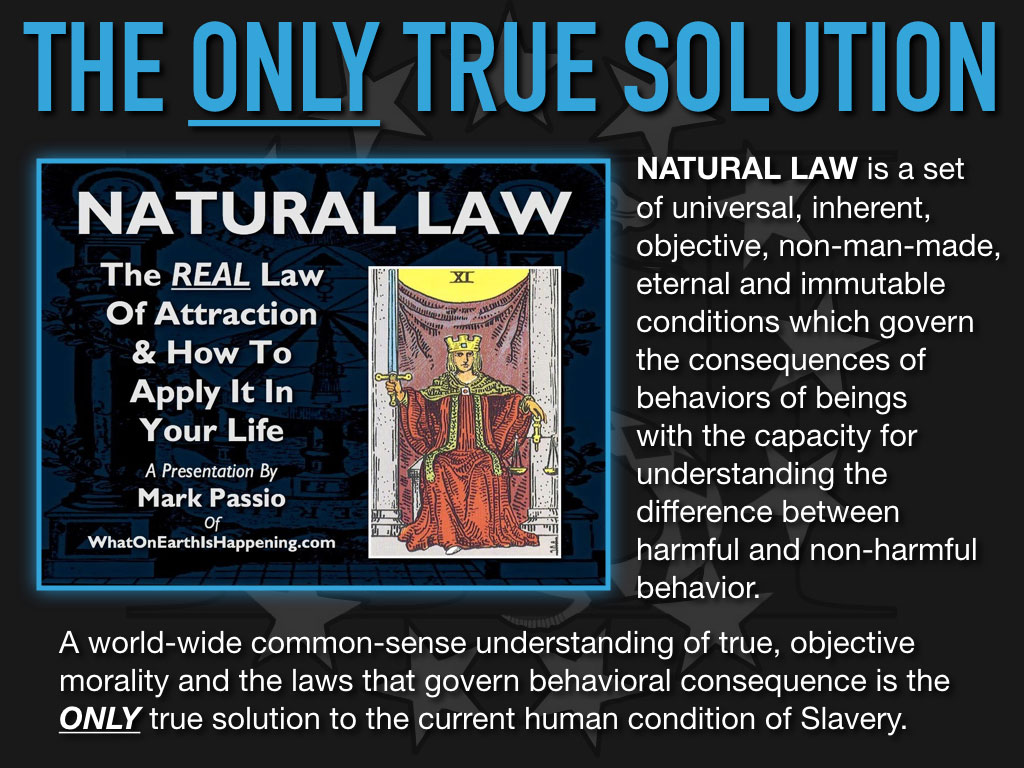 THE ONLY TRUE SOLUTION
p>htps://cdn.steemitimages.com/DQmdYsD9ihvq2trE52jiHPYaZiH7mNB9wkbEZGarcwgDQWL/007.jpg

For as long as humanity remains a slave to the occult knowledge of natural law, it will ring true that we as people will remain enslaved.  And, that is by LAW!  That means that it applies to intelligent beings, so it doesn’t apply to lesser beings like the animal kingdom, they‘re not going to sit there and reason like we do, while we have the capacity for reason.  They’re instinctual creatures and have the capacity to feel emotion, but we have higher thought functions than that of the animal kingdom which is why we should use them.

That’s why natural law applies to us, and behavioral laws of creation apply to humans and more advanced things because we have the capacity for understanding morality and the only laws that govern behavioral consequence is the only true understanding to the current condition of human slavery.  For as long as humanity remains ignorant of the occult knowledge of natural law it will remain enslaved.  By universal cosmic LAW.  By no laws of man that it will remain enslaved, but by universal LAW and the LAWS of creation.  If you’re not familiar with Mark Passio’s work, I encourage you to watch his work on, “The law, the real law of attraction and how to apply it into your life.”   You can find it on his website here and in the videos section or you can get a hard copy in the gifts section of his website.

I like to write about the real law of attraction and how to apply it into peoples lives because not many people know how to address the current human condition who truthfully need to learn how.  Though I digress like a lot of like-minded people do, and we all have our differences, I do believe that people can become something a lot more amazing than they've ever been before.  It's just going to take a studious mind and a people that are willing to touch on subjects that most people are afraid to go in order to get there.  If we don't – no one will, and nothing will get done, and people are going to suffer in the future greater than the suffering we are currently seeing take place today.

I'm just trying to be one person that is willing to touch on places that most people have no courage to stand up against all odds against me for doing so, not because I deserve a target on my head, but because I have already been a target, and with what was done to me in my life, I'll never get my past experiences back, or get the years that it has shed off of my life back. I'll never get free from the facts that now represent my life as though I'm living a fragment of what I could have been living today, and so... I just take it upon myself to do this kind of work because the world is far worse then I ever imagined it to be, and with the many things that shook me out of my normal happy-go-lucky life, I began to wake up and wake up fast to see things as true, and began to research. I'm just not going do nothing about what I see taking place in the world anymore because I believe we are already at war, and it's a very strategic war that takes the vulnerable and makes a mockery out of a life that could be far less disenfrachised as they are.

I always thought that if you can remove the things that cause a person to become disenfranchised, I believe you can stop that person from becoming a criminal. This is why we will be talking about duress and what creates duress in the future blogs within this blog series.es.

To read the next section of this blog series ClickHere to read on. Thanks. SOURCclickhere