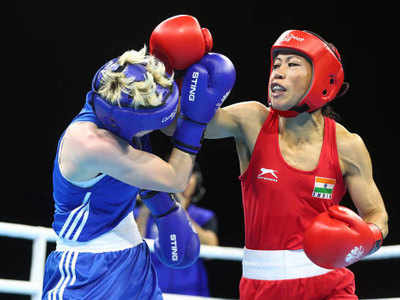 Six-time world champion MC Mary Kom and Lovlina Borgohain according to the performance they are selected for the next female boxing world championship but in this decision former junior world champion, Nikhat Zareen is very upset.

Now Mary Kom is 36 years old. She got two gold medal in India open and last tournament of Indonesia, now she selected for 51 kg category.

World and Asian silver medalist Lovlina Borgohain will participate in 69 kg category. Nikhat is now 23 years old and she won a silver medal in last Thailand tournament and she had hoped to fight in 51 kg category i mean in the place of Mary Kom. This haidrabadi female boxer wrote letter to Indian boxing federation and mentioned that last Tuesday someone stopped him to participate against Wanlal Duati in the trial. That is done the main selector Rajesh Bhandari.

Although Rajesh Bhandari accepted that a few days back BFI and the main member took the decision to select mary Kom. The world Championship will be played in October 13 at Rusia. Rajesh said we got presentation from mary kom coach (Chhotelal Yadev). After the thinking we felt that marykom did a pretty better performance without trial. Let's see what will happen in October 13.

Please refrain from using the creative coin tag in your posts unless they are actually post pertaining to the creative arts. Doing so can lead to being flagged by @notcreative and a removal of pending CCC rewards.

Ohh thanks for the information.