Humanism and Existentialism: Part 7 - Thomas Szasz - The Factory of Madness 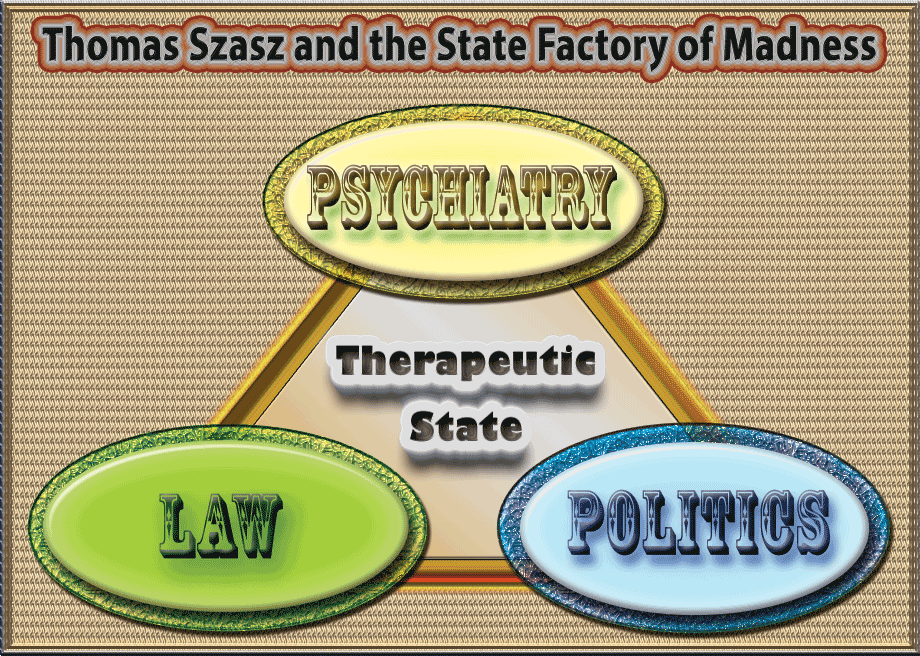 The Dialectics of Liberation: Anarchism, Existentialism, and Decentralism.
Humanism and Existentialism: Part 7 - Thomas Szasz - The Factory of Madness

"Madness is a disease of the Factory." - charlie777pt

“Being in a state mental hospital would drive anyone crazy!” -Thomas Szasz

Humans are already denying the homeostatic regulations that are the main characteristic of living things, a concept developed in the XIX century that was discovered by the physiologist Claude Bernard who said that “all the vital mechanisms, varied as they are, have only one object: that of preserving constant the conditions of life.”

We are denying the whole essence of our existence because the conditions of life along with our rights and free speech, in the last decades, have been drastically reduced but people are doing nothing to stop it, including the state of the planet.

The only way out for this unethical era of politics, is the participation and social activism, to reestablish new values and principles for the common well-being and a more fair world, sharing the common values of people and ideals of peace and justice.

Politics engineering with lobbying has dominated the representative democracy, and people right now, are prisoners of radical populist movements with pseudo-liberal ideas, and these are the symptoms of the terminal illness of the empires that lead "the western civilization", with a total lack of solutions for the real problems of society and the planet.

"The system isn't stupid, but people in it are" - Thomas Szasz

We can't label insanity as a disease we have to drill and find the origin traumas as its source but as a behavior with a meaning to be interpreted.

The libertarian views of society influenced humanistic psychology and vice-versa, mainly emerging in the '60s with a total focus on personal freedom and opposing all the totalitarian institutions, like the church, police repression, and authoritarianism, including the war on drugs and the involuntary-institutionalization of people labeled with mental illness.

We have free will and the power to go on and stand for what we believe in, and if you are an activist or a warrior of freedom the best gun wee can use it is our mind

"Yes, I am a libertarian." - Thomas Szasz

Thomas Szasz wanted to see a separation between psychiatry and the State apparatus and he advocated the right to use drugs and take away the power of psychiatrists by abolishing their right to detain people for involuntary mental hospitalization and treatment, and even our right to die that is still in the hand of the Governments and medicine.

The myth of mental illness was defined as a metaphor of a physical lesion, to fit into the ideology of the medical-psychiatric apparatus.

There is no cure within coercive environments, and only the system get better in compliance with social order demands, because the catharsis only exists with the personal involvement, and not by constraints that make people bend to the medical police of the mind.

Szasz was always worried by the process of the dehumanization of man/woman by the institutions and conventions about insanity, and the social pressure to accept it and to bend to the "orderly behavior".

"The goal is to assume more responsibility and therefore gain more liberty and more control over one's own life." - Thomas Szasz

That's why Szasz wanted psychiatry to be separated from the action of the State, Law, and Politics.

Psychiatrists are the only people in the world with the power to detain people without any scrutiny, where they are judges, lawyers, and jailers, not like the police that arrests a person but has to deal with the law and justice to confirm the decision of incarceration.

He knew the power of language in the maintenance of the social order and the psychiatric scientific power dominated by the concepts of the medical class of physical illness applied to the universe of mental disorders.

People have problems in their lives, but they own their bodies and minds, and institutions can't use coercive psychiatry and involuntary hospitalization where the patient can't oppose to involuntary psychiatric treatment, that is violence against humanity

Has he stated, we cannot diagnose a psychological trait or behavior, using chemical blood tests, biopsies, or surgical observance of biological patterns.

The medicalization of mental illness, in opposition to the most effective therapeutic method, that, of course, some years ago was more expensive in terms of human resources, but nowadays the Big Pharma made the chemical solution speculation much more expensive than the humanization of treatment by therapies that could avoid future social costs.

He was labeled as an anti-psychiatrist but he was very critical of their founders like Ronald D. Laing and David Cooper and he referred to himself as an anti-coercive psychiatrist.

Szasz is not an anti-psychiatrist and he clearly was against coercive treatment and forced institutionalization of people, as well as the prohibition of using drugs, an ideology blurring our view of insanity working as social labeling according to the determined prevailing social norms.

"Since theocracy is the rule of God or its priests, and democracy the rule of the people or of the majority, pharmacracy is, therefore, the rule of medicine or of doctors" - Thomas Szasz

Szasz saw mental disorders as a behavior of “acting out” of the framework of society and family, and his preoccupations where the unethical moral and scientific foundations of psychiatry, labeling people to de-humanize them and take away their personal rights and moral responsibility.

The coercive nature of the psychiatric diagnoses as social control materialized in the forcefull detention for compulsory treatment where the patient is not involved in his/her own cure that is imposed by the symptomatology.

Psychiatry is involved in the repression of behaviors in the moral and political level because a mental disorder can be just the reflex of the state of alienation of society and Szasz is his prolific writing documented a lot of abuses of the "therapeutic state".

Psychiatry and medicine in modern society is a kind of social control targeted to the increasing range of aged population looking for liniments for the aging and disease problems (gerontology- the science of aging) that is now the most profitable business of Big Pharma.

"Objective, medical diagnostic tests measure chemical and physical changes in tissues; they do not evaluate or judge ideas or behaviors." - Thomas Szasz

We are the owners of our bodies and minds and must free from institutional violence and coercion, by fighting authoritarianism and centralized institutional power, regulating ou social behavior.

Every time someone thinks out of the box the system kicks back and label them with mental disorder.

Even in our everyday lives, whenever someone presents new ideas about the worldview, we tend to label them and treat them as crazy.

Szasz was a libertarian, opposing any political form of oppression from the state collectivisms of capitalism to socialism and communism, that to him seemed all the same in coercive terms.

Szasz was totally right because today we can see that his criticism of the influence of modern medicine on society that is taking over the Health budgets of Governments and citizens and privatizing the ownership of our bodies and minds denying our responsibility to control them.

"Every act of conscious learning requires the willingness to suffer an injury to one's self-esteem. That is why young children before they are aware of their own self-importance, learn so easily."- Thomas Szasz

For Szasz the concept of mental illness is based in a social-constructed process by the factory of doctors' power in society.

The evidence of this power is right into the concept of calling disease to mental state that has no pathological biological signs, and the criteria is very inconsistent, subjective, and opening space for coercion the abuse of power, of what he calls "therapeutic state", that labels people and treat them, to exercise social mind control of psychiatric disorders.

This fact poses questions about the ethics of the medical class because it is linked to by big farmaceuticals, insurance companies, and even justice, making Psychiatry as the mind police of the standardization of social behavior.

In the era that Szasz started to work as a psychiatrist, there was still a dreadful alienization of deviant social behaviors, using methods like a lobotomy, electric shock therapy, and medication that annihilated the patient's will to a living torpor of numbness.

We have a lot of horror stories of the orthodox psychiatry, imprisoning insane people for years imposed by society or family that wanted to get rid of the truth of an individual that exposed their own symptoms.

3 - Thomas Szasz and the War on Drugs

Szasz fought for the right to use drugs in a legal market, instead of living with state prohibition and the Lab gangs aka Big Pharma, stealing the market from the dealers, with "legal" drugs that are much more harmful than the black market old substances.

"In my opinion, using drugs is a fundamental human right, similar to using books or prayer. Hence, it comes down to the question of what does a person want and how can he get what he wants? If a person wants a book, he can go to a store and get it or get it on the Internet. He ought to be able to get a drug the same way. If he doesn't know what to take, then he could go to a doctor or a pharmacist and ask them. And then he should be able to go and buy it." - Thomas Szasz

The use of drugs is not an addiction but a social habit that can't be cured with the legal drugs psychiatry that in the last decades has become a "legal" suppliers of drugs that create addiction.

The war on drugs criminalizes its use, when the only victim of the crime is ourselves, of course with collateral damages to the others.

For him, Madness is a product of the social factory a shouldn't have a name like "disease" or physical illness, words stolen from the medical lexicon that builds a psychopathological Myth, underlay by social order control of the state, psychiatry, and medicine ideologic apparatuses.

I ended up in this post of speaking of the most important authors around Existentialism, Humanism and Post-structuralism, to the final phase and end with the relations between Anarchism and Existentialism and with a brief approach to the future to speak of Post-Humanism , of Transhumanism, and of Inhumanism, which will close this chapter.

The Dialectics of Liberation: Anarchism, Existentialism, and Decentralism.

Next posts on the Series:

Index of Chapter 1 - Anarchism of this series - Part 1 This Series: