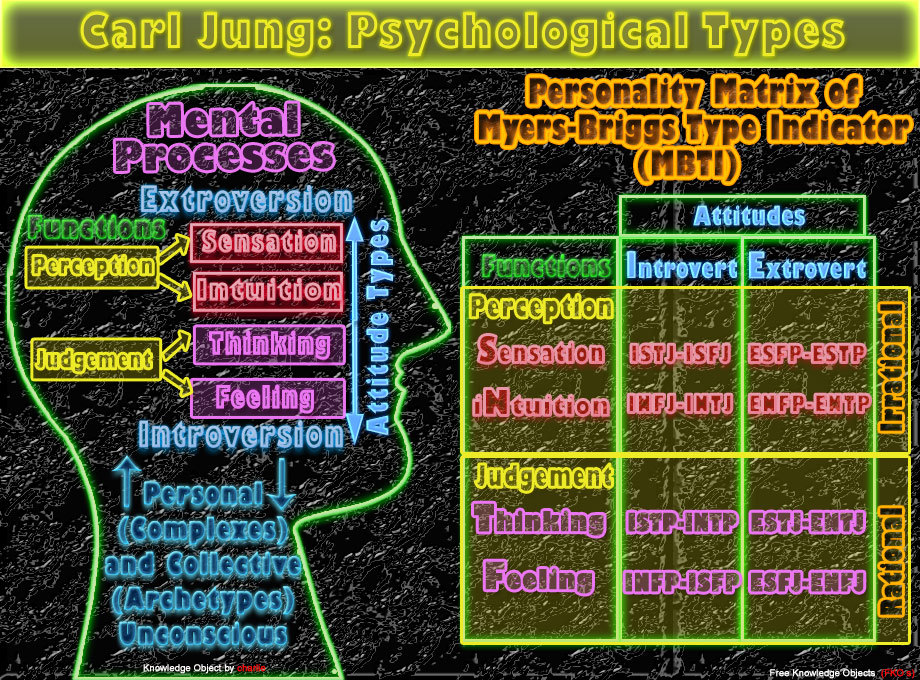 "Dreams are the digestion of reality." - charlie77pt

"The life of man is a dubious experiment." - Carl Jung

In the last post, we have approached the theory, archetypes, and functions, of Carl Jung, and in this article we are going to talk about the personality types he developed, and how today we can take a simple test to use as radiography of our personality, and a map that orients our personal, social and professional choices for life.

Honestly I feel the expected disappointment that this two posts only express fragments of the vastness of the universal thought of Carl Jung, and left me with the desire of coming back to this matter with a lot of posts, like it happened a little with the long article about Wilhelm Reich, and that's why I will not talk about Freud until I finish this saga and in the end give enough space and posts to write about him.

A healthy person is self-centered and self-directed and is capable of internal regulation without the influence of restrictive moral codes or impositions of others, that interfere with our capacity to realize our full potential.

"The dream is the small hidden door in the deepest and most intimate sanctum of the soul, which opens to that primeval cosmic night that was soul long before there was conscious ego and will be soul far beyond what a conscious ego could ever reach." - Carl Jung

In his trips to meet tribal and ancient cultures in Africa, he found out that Freud's imperative of the sexual drive as the roots of humanity's psyche, while Jung saw the process of "individuation" as a driver of the Unconscious, where dreams have a "transcendent function".

When he analyzed the dreams of primal tribes he found out that instead of the sexual motives of the Western civilization, they were often symbolized by green pastures, full of animals or corn fields, revealing the main desire of finding food as the primary source for survival.

"The privilege of a lifetime is to become who you truly are." - Carl Jung

Unlike Freud, he believed that the Unconscious was not just a node of pathology, but also had the capacity to liberate our vitality resulting from the confrontation of the duality forces of the mind, and that was our job to balance it and choose the path to be good and avoid evil that is latent in the dark allies of our psyche.

Carl Jung showed me my main way of thinking and acting, but the most extraordinary thing was that he opened my eyes to understand that I could learn to identify, relate, and understand better the other people around me.

He was a teacher of the experience of myself as well as other people, which interfered positively in the inter-experience resulting from my communication with others.

I'm extroverted with a passion for variety, new adventures, actions and work in cooperative groups, a sensitive that create a good communicational environment, and an intuitive explaining my insatiable search for new situations, experiences, challenges and curiosity.

Everybody should Know their Psychological Types, and today it is easy to do the Myers-Briggs Type Indicator (MBTI) test connecting the Jung's Functions, and it is like taking today a picture of your Self, to later remind who you are in your actions, and do the right choices for life, work, communicate, and love.

This portrait makes us aware of the Self, like a movie of the dynamic action of the dominant functional forces of our type of personality, working inside us, and driving our way in life.

"It is up to each person to recognize his or her true preferences." - Isabel Briggs Myers

"A psychoneurosis must be understood, ultimately, as the suffering of a soul which has not discovered its meaning." - Carl Jung


Human beings perceive information and judge it to make decisions, and everyone is different in this process, demonstrating that perception and judgment, are like a unique individual fingerprint of the way to deal with reality.

"The little world of childhood with its familiar surroundings is a model of the greater world." - Carl Jung

People with an Extroverted attitude have a high-energy that they get from the outside environment, and act in reality trends, while in the opposite side the Introverts have lower energy, that they are fed from within, and a have a tendency to reflect about the world outside.

Perception in a person can preferentially use Sensation, seeing reality as it is in a concrete way, or on the other hand, other people can utilize Intuition in an abstract fashion, giving a broader big picture, connected with inner ideas symbols and concepts.

The Judgement process is cognitively the expression of societal and cultural values and a reaction to the way the perceived world influence people's actions.


In the judging process, some people can make very rational choices based in thinking using firm principles, logic, psychology, and philosophy, while others make decisions based in feeling using emotions as the main source that can lead to complaints and co-dependence from others.

The eight functions Jung defined are:


Isabel Myers and his mother Katherine Briggs created the Myers-Briggs Type Indicator (MBTI) test connecting the Jung's psychological Functions and his main rule that the Extroverts have dominance in the use of the judging function (Think and Feel), or the perceiving function (Sensing and iNtuition).

The opposite happens with the introverted type that will choose the dominant function to be used as the judgment if he prefers the perceiving one, or if the dominance is perception where the introverted has a preference for judging.


Jung's psychological types are defined in a matrix of personal attitudes connected to a tendency of using the perceptive or the judgment functions, and most of the people have a dominant facet crossed with the other.

Businessmen and entrepreneurs have a predominance of Extrovert Sensations, and Art connoisseurs use Introvert Sensitivity, and on the other side successful Public Relations utilize Extrovert intuition, and mystics have a bigger preponderance for Introvert Intuition

Carl Jung characterized himself was a dominant Introverted Thinker.


I suggest everybody should take this personality test and really find out the multiple real facets of the internal dynamics of the Self, the way we choose our careers, our human skills, as well as, the way we communicate and act, giving a great and reliable self-portrait.


It also made me understand that I use introverted intuition with a clear perception of my inner, unconscious world, a capacity I had already felt but refused to accept.


In the picture above we can see the possible 16 combinations of this factors: ISTJ, ISFJ, ESFP, ESTP, INFJ, INTJ, ENFP, ENTP ISTP, INTP, ESTJ, ENTJ, INFP, ISFP, ESFJ and ENFJ

I'm 100% of Extravert (E) preference with almost no Introversion, I have 50% Intuitive (N) moderate preference over Intuition and I use 3% of Feeling (F) and Judging(J) , I rely only 3% in feeling and predominantly use Thinking, and finally I prefer Judging over Perceiving (28%).

My 3% Feeling suggests characteristics of more than one personality like ENTJ. but no doubt ENFJ is the dominant one, that increasingly becomes more self-perceptible with aging.


This is very coherent with the jobs I've chosen in my life (EFNJ career choices), and the best and biggest part was always teaching others, and citing the test, these type "are the benevolent 'pedagogues' of humanity", and my functions varied from social work, psychology and education, to investigative science, software development, management and human resources.


Every personality determines our preferred types, that is associated with a Learning Style (EFNJ) and Communicative Skills (EFNJ)

"Nothing has a stronger influence psychologically on their environment and especially on their children than the unlived life of the parent." – Carl Jung


Today's neuroscience found some discrepancies with Jung's theory, showing data pointing out that the extroverts utilize more the frontal part of the brain, with higher dopamine release, and the introverts use more the posterior part that is involved in the thinking process, maybe showing a correlation with the neurobiological functioning and the inherited "instinctual patterns of behavior and perception".

"Where love rules, there is no will to power; and where power predominates, there love is lacking. The one is the shadow of the other." - Carl Jung


Read a fast definition of the various combination types in
https://www.123test.com/jung-typology/


Carl Jung Documentary - Biography of the life of Carl Jung


Carl Jung Interview That Will Make you CRY (1959) [WARNING: this might change your beliefs


Carl Jung and The Value of Anxiety Disorders

The Dialectics of Liberation: Anarchism, Existentialism, and Decentralism.

Next posts on the Series:

Index of Chapter 1 - Anarchism of this series - Part 1 This Series: