PSA: CAT is not CATS 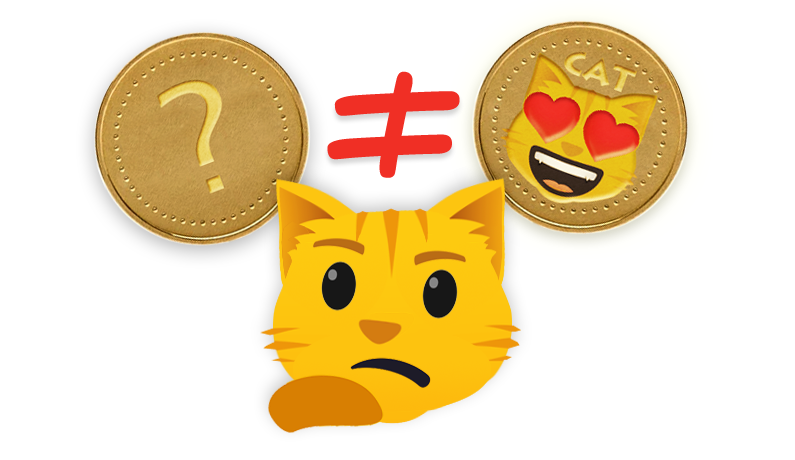 There are some new CATS on the blocks.

But don't confuse CAT with CATS. That's something entirely different.

A new feline token has appeared on steem-engine. It is called CATS. I hope this doesn't get mixed up by anyone now. CATS is in no way related to the Cat Appreciation Token - CAT and the cuddly kitten-bots.

I kind of liked to pluralize the symbol of our token as CATs. But I think I should start breaking with that habit to avoid any possible confusion in the future. From now on I'll try to keep the symbol pluralized in proper token-speak, without the added "s". One CAT, many CAT, just CAT.

So what are CATS then?

The CATS token is issued through @catsmakekittens, and the name says it all: CATS make KITTENS. An increasing amount of KITTENS can then be "ritually" sent back in exchange for a new CATS. Apparently that's designed to keep the value of one KITTENS at 1 STEEM?!

I don't know, but that sounds like animal sacrifice to me!

Each CATS costs 19 STEEM right now and produces 1 KITTENS every day and that's theoretically better than a 5% daily return?! Right?! An added bonus of holding CATS is also that apparently you'll get upvotes from @catscientist, heavily staked with almost 100k NEOXAG. So if you are a frequent visitor of neoxian.city, maybe it's actually worth taking a closer look for yourself?!

You should already know I am a bad salesman, so definitely don't take investment advice from me! Always do your own research!

Is CAT better than CATS?

That's a silly question and I'm the wrong person to answer it. All I can say: CAT is definitelty something entirely different.

CAT is designed to have symbolic utility, to support and guide the kitten-bots in cuddling cat-lovers on the STEEM blockchain.

You can get free CAT by having positive interactions with any of the kitten-bots on the chain.

CAT in your wallet automatically works as CATNIP and a sufficient amount is guaranteed to bring one of the kitten-bots, @steemkitten, @cuddlekitten or @steemeow, to pay you a visit in no time.

You can buy CAT for cheap from other users for less than 0.01 STEEM. @catnet will continue to limit the price for the token on the market by maintaining a sell wall and offering a fixed rate for under-the-counter sales.

The kitten-bots will be growing, and we'll probably get them to deliver a properly dust-proof cuddling experience in the near future.

The exclusive Call-A-Kitten feature will be enabled for CAT-whales shortly after.

And we will never ever sacrifice no kittens here! Thanks for the PSA. I was also a bit worried that people might confuse the two tokens since their names are so similar. I'll follow your lead and stop adding an s to pluralize it and just stick to calling it CAT.

yeah... too bad really, CATs rolled of the tongue so well...

Maggie tells me I need to buy more CAT tokens! :)

Yeeea... and we'e growing some of the best catnip available on the blockchain right here :D

Oh! Sir is too squeamish to sacrifice cats but has no trouble making whale-cat hybrids... ;)

I'm still looking for a good feline ranking... cat-whales would be lions... then again... nobody would get what I am talking about... CAT-lion... nah... I guess we all have to get our paws wet sometimes ;)

Cuddleberry has grown so quickly! I had almost gotten myself to release him back to the wild... but then I didn't... I think he's way too tame for life in the wilderness by now. It looks like I'm keeping him around and he has already started taking over my living room. I tried keeping him in a cage for a while but he goes bonkers at night if he can't roam free. That being said... he's become extremely nocturnal and jumpy, which is why I haven't been able to get some good pictures of the chubby adult Wood Mouse he's grown into.

Yes please. And I agree, the whole kitten sacrifice thing seems kinda weird to me. I'm glad there will be a way to make the kitten votes dust-proof

Yes, I'll start opening delegation requests for @catnet to provide dust-proofing to the kitten-cuddles for at least half a year to come.

Yes, I was a little confused when I noticed there were CAT And CATS, although I do have some of both. As someone holding over 10,000 CAT, know that I am obviously a fan!

CATS are more like an investment program... a bit like SteemBasicIncome, only different kind of dividends. Very high returns at the moment, but they will decline as more and more of them are in the market. At least as I understand it.

Yeah, I can see why a cat-lover wouldn't want some more CATS next to their CAT ;)

Although I'm still a bit creeped out about that whole sending KITTENS to the void ritual and the raison-d'etre for such occult structures creating very high initial returns. Just saying: poor kittens! ;)

We can live together in harmony! I may need to borrow a few CAT for some rituals though...

Whaaaaat... now that your KITTENS get educated you want to start ritualizing CAT?!?

hehehe... anyways, CAT makes good CATnip if you let it germinate in your wallet for a while... you should probably try to get some, too. All those kittens stuck in the education camp... I'm sure they'd enjoy getting high every now and then to escape the monotony of the classroom :P

Interesting idea. We can use forced drug stimulation to increase classroom performance to help maximize efficiency. I like the way you think @catnet.

Hi, I won 10 kittens in a draw, how do I turn them into CATs and get upvotes?

Oh my... and so the confusion starts.

If you won some KITTENS you'll have to speak to @catsmakekittens. They manage the CATS and KITTENS program and you'll find more information from them.

@catnet here is responsible for CAT - the Cat Appreciation Token - without the S... Which is actually what this whole post here was all about - CAT is not CATS.

The only kittens around here are @steemkitten, @cuddlekitten and @steemeow. They'll come visit you every once in a while if you have some CAT in your wallet, because CAT turns into CATnip automagically, you don't even have to do anything.