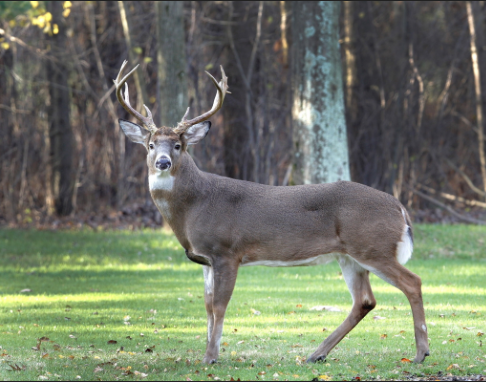 This post contains some graphic content, but, in all honesty, I can't imagine you'd read anything with the word 'zombie' and not expect something a little shocking

Seems like, every year, we're warned of some freaky new pandemic. We've had bird and pig flu, resulting in the mass slaughter of thousands of both, (not to mention the vaccines that accompany both) and recently there have even been multiple incidents of people losing limbs from dog kisses.
Dog kisses? Really?
I don't want to live in a world without those. Just kill me now.

!
still not the graphic content you were warned about earlier

Evidently, our country is under the current threat of zombie deer.

Known as chronic wasting disease (CWD), the highly contagious and often deadly affliction has ravaged the deer population in an estimated 24 states and two Canadian provinces, Fox News reported earlier this year. As the disease, which causes a lack of fear of humans, lethargy and emaciation, decimates deer and elk populations, Nevada officials are trying to prevent it as much as they can.

CWD is not a viral or bacterial disease; rather it is transmitted by prions, protein particles that have been linked to brain diseases including mad cow disease. Prion diseases severely damage brain tissue and are incurable.

I noted that that article used the phrase 'often deadly' while others that I read, and posted here, state it is always fatal. Either way, I looked up 'Prion' because that was listed as the transmission process.

Prions form abnormal aggregates of proteins called amyloids, which accumulate in infected tissue and are associated with tissue damage and cell death.[8] Amyloids are also responsible for several other neurodegenerative diseases such as Alzheimer's disease and Parkinson's disease.[9] Prion aggregates are stable, and this structural stability means that prions are resistant to denaturation by chemical and physical agents: they cannot be destroyed by ordinary disinfection or cooking. This makes disposal and containment of these particles difficult.

Since it listed Alzheimer's and Parkinson's in the same group as CWD, I did another search for Aluminum, as I've read in multiple places that it is a big contributor to both, and found a very informative piece on the effects of aluminum and mercury on our bodies, including sources of supply.

“The most important thing you can do is get the animal tested,” he said. And if there’s any thought that an animal may have come in contact with the illness or is sick themselves, harvesting their meat should not even be considered.

This isn’t a new situation, we were warned, back in 2017, of CWD in deer.
https://www.freep.com/story/news/local/michigan/2017/10/06/zombie-deer-michigan-hunting-chronic-wasting/739871001/
Although back then, there was no reason to believe the condition could be spread to humans who consumed the meat of affected deer.

Stewart said that there is no known case of chronic wasting disease in humans and that there is no proven risk in eating venison that has tested positive. However, the U.S. Centers for Disease Control recommends against it.

The good news, according to this article

over the following 6 years, a study was conducted...

The conspiracy theorist in me suggests this could be one (or a mix) of a few processes at work.
'They':
Are developing a new vaccine
Don't want us hunting our own food
Want to explain away the harmful effects of the toxic chemicals they admittedly spray into our atmosphere
Are trying to widen the divide between us and nature through fear of contracting some zombie-like disease

Of course, it could be some natural anomaly. 😏