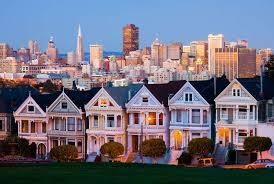 Why not San Francisco? Ok, why not! I love San Francisco. I lived on Pierce Street for a year in a tiny apartment with a view of the Bay Bridge from 1997-1998. My home was a three minute walk to Alamo Square Park, which is famous for the delightful row of colorfully painted Victorian homes on the adjacent street. You know it, even if you think you don't. See the photo below. Told ya. You know it.

As stated by Griffin Estes, "Alamo Square Park today is a central feature of the neighborhood, if not the city. But before it became a popular destination for locals and tourists alike, it almost got developed over – twice. Here’s a brief history, as compiled by someone who grew up next door. Alamo Hill, as the plot of land was originally known, was a stopping point along the Devisadero trail from Mission Dolores to the Presidio. “Devisadero” loosely translates to ‘with a view’ in Spanish, and you can read all about the controversial history of the street name in our article and its comments section from last year."

For the complete history and many historic documents, check out Griffin Estes website dedicated to Alamo Square Park. https://hoodline.com/2015/06/alamo-square-park

Alamo Square view of the 1906 fire. Photo via the SFPL/ASNA.