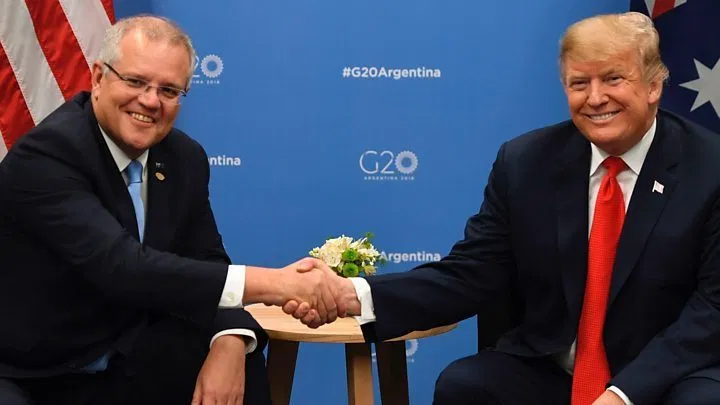 Scott Morrison, the novelty joke Prime Minister from the imaginary nation of Australia, met with his boss Donald Trump today without any mention of the US government's transnational conspiracy to imprison an Australian citizen for exposing American war crimes. The two imperial governors publicly discussed the possibility of Australia accompanying the US into a war with Iran, as well as the US trade war with China and Canadian Prime Minister Justin Trudeau's brownface scandal, but there is no record of any mention of WikiLeaks founder Julian Assange.

This is all unsurprising, given that Australia is Washington's basement gimp. Now little more than a US military/intelligence asset, Australia consistently aligns with Washington on all foreign policy issues and is no more of a sovereign, independent nation than Alaska or Hawaii. As Assange himself said shortly before he was silenced and then imprisoned, "I love my birth country Australia but as a state it doesn't exist."

"Were Assange imprisoned by the Chinese, Russian or Iranian regimes, the response would doubtless be very different," the World Socialist Website recently observed of the Australian government's silence on Assange. "Ministers would claim that they were making urgent diplomatic representations and they would piously speak about their responsibilities to Australian citizens unjustly imprisoned abroad. Such statements have been made by leading Australian government ministers over the past week, after it was revealed that three Australian citizens are imprisoned in Iran on espionage charges—the same allegations faced by Assange. Morrison and his colleagues have also protested against the imprisonment of Chinese dissident and Australian citizen Yang Hengjun by the Beijing regime."

In a world where plutocratic narrative control makes it exceedingly difficult to assemble a lucid picture of what's really going on, the persecution of Julian Assange has been highly clarifying. It has for example killed dead the notion that imprisoning and torturing dissident journalists for telling the truth is something that is only done by the enemies of the US-centralized power alliance, as well as the narrative that we live in a society that is interested in the promotion of freedom and democracy. But perhaps the most illuminating aspect of Assange's case has been the shattering of the illusion that we live in a world of separate, sovereign nations.

It makes absolutely no sense that the Australian government would stand by as one of its own is imprisoned and tortured for conducting journalism when it rushes to defend its citizens from other governments, unless you think of Australia as part of a single US-centralized empire, in which case it makes perfect sense.

It makes absolutely no sense that the UK would spend £16 million patrolling the Ecuadorian embassy to enforce a bogus and petty bail charge until it could drag him out kicking and screaming in coordination with the Ecuadorian government in its termination of his political asylum, unless you think of the UK as part of a single US-centralized empire, in which case it makes perfect sense.

It makes absolutely no sense that Sweden would sharply diverge from all its standard legal protocols for everything from testimony to hearings to InterPol Red Notices to extradition proceedings over completely unproven and plot hole-riddled allegations of sexual misconduct, unless you think of Sweden as part of a single US-centralized empire, in which case it makes perfect sense.

It makes no sense that Ecuador would suddenly begin acting like it's gravely concerned about cat hygiene and skateboarding after the very serious reasons it gave for granting Assange political asylum in the first place, unless you think of Ecuador as part of a single US-centralized empire, in which case it makes perfect sense.

If you think of Australia, America, the UK, Sweden and Ecuador as separate, sovereign nations, then it looks like a very strange coincidence indeed that they would have all been pursuing agendas at the exact same time in a way that just so happened to result in Assange locked in solitary confinement awaiting US extradition. If, however, you think of them all as a single entity, then it doesn't look like a coincidence at all: it looks like a single empire imprisoning a journalist for exposing inconvenient truths.

In the same way that the invisible, unacknowledged nature of the modern international oligarchy keeps people from realizing that they are still living in an age where they are effectively ruled by kings, the invisible nature of the US-centralized empire keeps people from realizing that they don't live in real nations that have any self-sovereignty at all.

And make no mistake, Assange is most definitely a US political prisoner. This is now true by any possible interpretation of the situation, given that his imprisonment for his bail charge is about to end and will now shift to his simply remaining locked in Belmarsh Prison awaiting extradition to the United States. A British court ruled last week that Assange must remain locked up indefinitely in spite of the expiration of his bail transgression sentence because he has a "history of absconding", which is a very dishonest way of framing the legal and internationally recognized right to apply for political asylum.

A political prisoner. Plainly and without argument. And yet the Prime Minister of his own country just met with the leader of the government which is orchestrating that imprisonment and breathed not a word of it. Because we do not live in the kind of world we were taught about in school. We live in a globe-spanning international empire.

Thanks for reading! The best way to get around the internet censors and make sure you see the stuff I publish is to subscribe to the mailing list for my website, which will get you an email notification for everything I publish. My work is entirely reader-supported, so if you enjoyed this piece please consider sharing it around, liking me on Facebook, following my antics on Twitter, checking out my podcast on either Youtube, soundcloud, Apple podcasts or Spotify, throwing some money into my hat on Patreon or Paypal, purchasing some of my sweet merchandise, buying my new book Rogue Nation: Psychonautical Adventures With Caitlin Johnstone, or my previous book Woke: A Field Guide for Utopia Preppers. For more info on who I am, where I stand, and what I'm trying to do with this platform, click here. Everyone, racist platforms excluded, has my permissionto republish or use any part of this work (or anything else I’ve written) in any way they like free of charge.

That headline would be hilarious if it wasn't so sad