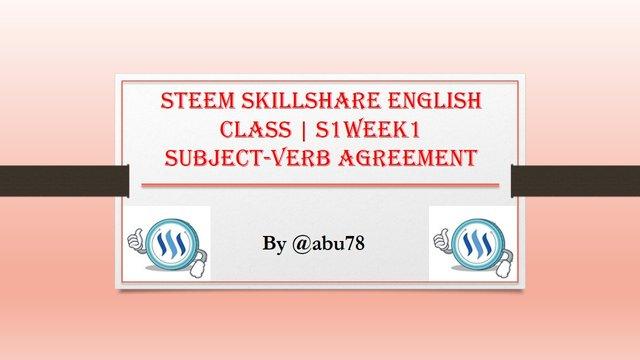 Today I continue my participation in such an incredible course that once again offers us our distinguished community.

## Explain subject-verb agreement in your words.

Concordance is the agreement that occurs between the grammatical accidents (person, gender and number) of the different elements of the sentence. More than anything else, emphasis is placed between the subject and the verb of the sentence in question:

Concordance also occurs when in the same sentence there are several nouns and a single adjective or a single noun and several adjectives. In this case, certain rules come into play that must be taken into account.

It is of utmost importance to know the proper conjugation and strict agreement that must exist, if modified, the meaning, coherence and sequence of the whole sentence will be altered, losing the central idea of it, in each and every one of the languages we must know how to master the grammatical tenses with the subjects to be mentioned.

## Look up and explore the 7 rules you have learned and explain in your own words how you understand them.

In order to communicate a clear message through the Spanish language, it is necessary that we respect the basic rules of its use. Concordance is used in the oral and written forms of our language; although its rules may seem quite intuitive, it is important to review them constantly if we wish to write flawless texts.

Rule 1: According to number

Carlos' son and his sleeping cousin look like little angels.

Rule 2: According to gender

When we coordinate two or more nouns or pronouns, we are forming a group that agrees with the adjective or pronoun in masculine.

Example:
I saw Mark and Anna very much in love.

Rule 3: According to the person

Example: He already collected his share. You and I will soon collect ours.

Rule 4: If there are different persons

The general rule says that if the coordinated nouns refer to different subjects, each must take its own determiner:

Example: His father, his mother and his grandmother get along terribly.

When an adjective qualifies two or more coordinated nouns and goes after them, the adjective should be in the plural and in the masculine, if the nouns are of different gender.

Example: For today we have lamb and baked potatoes.

When the adjective comes before coordinated nouns, it is best if it agrees in gender and number with the closest one:

Example :He charged the bill without the necessary authorization and approval of the boss.

Rule 7: Adjectives placed after several nouns of different genders joined by a conjunction.

When there are two or more synonymous nouns joined by a disjunctive conjunction, the adjective must be in the singular.

Example: He was the highest paid goalkeeper of the year.

## Provide 5 examples with each of the 7 rules you have learned.

-My cousins went to play at the abandoned house.
-I ate fresh strawberries while I was ironing my shirt.
-My mother has a very naughty cat and a very naughty dog.
-It's Martin Scorsese's most expensive film.
-Apple and banana are delicious.

-My grandmother cooked me noodles with stew.
-The sun will rise at 6:30 in the morning.
-Damian got a haircut.
-My aunt went to the supermarket in the car.
-I bought a new bicycle.

-I didn't do anything.
-Do you know the Museum of Fine Arts?
-You could help me carry the suitcases to the room.
-She's my history teacher.
-When we arrived, he was already gone.

-Our house is by the lake.
-Our children stayed at the park.
-His bicycle was damaged.
-I found your socks.
-Your dog has fleas.

-Dressed in white suit and white mantilla.
-The phone and red lining
- The cat is eating with the black cat.
-The light is gone and the street is dark.
-Finish the exam, and the homework is bad.

-old and forgetful friends.
-He said goodbye with deep sorrow.
-That was a warm and quiet afternoon.
-Nice mood he's in!
-Great contribution you made! It all went wrong.

Rule 7:
- Your shirt and hat look great.
- It was the teacher and the cook that stood out the most.
-The song and video are perfect.
-The dog and cat are cute.
-Her eyes and hair have a lot of shine.

* Hope everyone had an Excellent day!!!! Greetings

Thank you for participating in the English Grammar class

Below is your assessment score:

Thank you for participating in the first lesson, I think you have to read the lesson very carefully especially the rules I taught were totally different from what you have presented and your examples are also out of content. Please try to understand the questions so as to avoid deviation in your work. Thank You and I wish to assess your subsequent works as well.