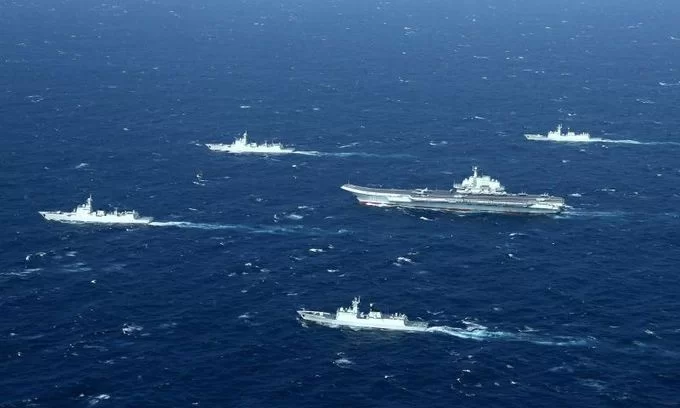 A Chinese navy formation takes part in military drills in the South China Sea on January 2, 2017. Photo by AFP/Stringer.

China's actions in the East Sea could undermine its own strategy by internationalizing the issue and affecting domestic opinion, experts say.

They could also erode bilateral and regional trust, and delay negotiations between China and ASEAN on the Code of Conduct in the waters, known internationlly as the South China Sea, they add.

The experts were making comments regarding China’s sending out its oil survey vessel Haiyang Dizhi 8 and escorts and infringing on Vietnam’s Exclusive Economic Zone (EEZ) and continental shelf earlier this month.

"China’s actions demonstrate that it is unwilling to conform to international law but is willing to act unilaterally to assert so-called ‘historic rights’ over the entire South China Sea," said Carl Thayer of the Australian Defense Force Academy at the University of New South Wales.

He said there would be three consequences to China’s recent actions.

First, even though Vietnam and China’s bilateral relations have improved this year, the latest developments would undermine Vietnam’s strategic trust.

While Vietnam and China have reiterated at multiple high level meetings that they have signed the agreement on basic principles guiding the settlement of maritime issues in 2011, China’s actions have violated that agreement, said Thayer.

Beijing has promised not to either complicate South China Sea issues or militarize the area, many countries have publicized satellite images of China building large-scale structures and military bases in the area, which also has eroded the trust of other nations besides Vietnam, including ASEAN members, the U.S., Japan and Australia.

Second, China’s actions have succeeded in internationalizing the South China Sea issue, which is something it does not want.

"China’s actions have resulted in a strong diplomatic response from Vietnam and a call by the nation for the international community to become involved. The United States has issued a strong statement condemning Chinese bullying," he said.

The U.S. State Department said last Saturday it was concerned by reports of China’s interference with Vietnam and other countries' oil and gas activities in the South China Sea.

"China’s submission stated that outside countries should not be involved in cooperation in marine resources. In other words, China seeks hegemony through joint ventures with companies owned by the claimant states," he said. With negotiations being delayed however, China’s plan may fail, he added.

Thayer expected China to eventually announce that the Haiyang Dizhi 8 has completed its mission and withdraw it from Vietnam’s EEZ as China did in 2014 when it withdrew the Hai Yang Shi You 981 after a month. But that doesn’t mean China would give up on its plan.

"China will continually push its oil companies and coast guard into the EEZs of littoral states to force them to acquiesce," he said.

"China has reached a point where there’s domestic knowledge of this incident, and that there’s now international attention, especially given the recent U.S. State Department press statement," said Collin Koh Swee Lean, an expert with the S. Rajaratnam School of International Studies of Singapore.

Knowledge of international reaction towards Beijing’s actions would negatively affect the administration’s reputation in the eye of the Chinese public, which Chinese authorities could find difficult to resolve, he said.

Collin believed China would likely back down if there’s a face-saving consensus reached with Vietnam, possibly modeling what happened in 2014.

However, he added: "If China backs down with a face-saving formula, it may also well mean that in future, it would resort to coercion again. So this is a consequence that needs to be considered. Another way to look at it is, if China is forced to back down without any face-saving, it may well steel its resolve to undermine Vietnam and other claimants in the future."

Thayer said Vietnam should lobby members of the international community to condemn China, as has the United States.

"Vietnam should reiterate its support for a rules-based free and open Indo-Pacific and work with like-minded states, demonstrate to China that its actions have consequences, and step up cooperation with the coast guards from the United States and Japan by conducting capacity building activities in Vietnam’s EEZ.

"If Vietnam decides to follow the Philippines and take legal action... it must demonstrate that it acted in good faith to resolve this dispute by peaceful means. Vietnam will need to argue later that it... exhausted consultations with China. In other words, Vietnam should leave the legal option on the table," Thayer said.

He was referring to the Philippines’ suit against China in the Permanent Court of Arbitration for its controversial nine-dash line in 2013 and the tribunal ruling in the Philippines’s favor in 2016. Experts said although the tribunal's ruling was not accepted by China, it got the international community to focus on South China Sea issues.

When it becomes ASEAN Chair in 2020, Vietnam should also intensify lobbying of member states to create a stronger united front in negotiations on the Code of Conduct, while making it clear that it would not accept a Code of Conduct that enables China to continually violate international law including the United Nations Convention on the Law of the Sea, he added.

Gregory Poling, director of the Asia Maritime Transparency Initiative and fellow with the Southeast Asia Program at the Center for Strategic & International Studies, said that the "major lesson is that China prefers to use threats and intimidation not military force. When other claimants stand up to that intimidation it is dangerous but usually forces China to back down."