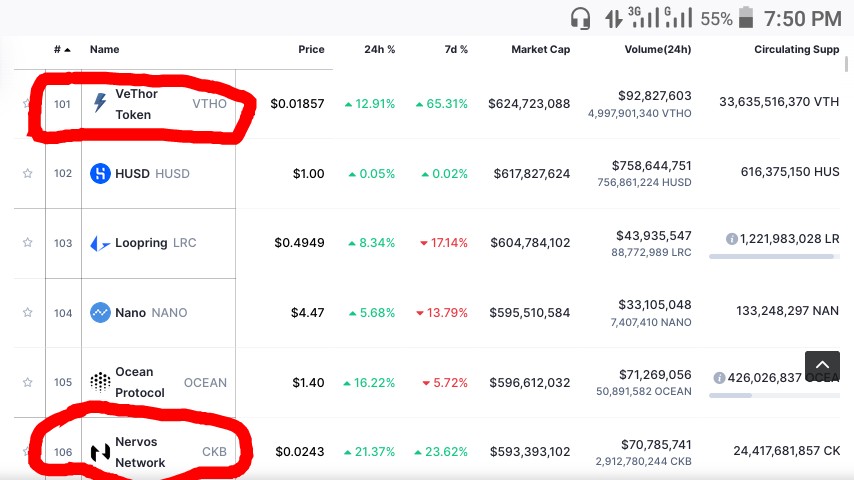 Thanks to professor @besticofinder for yet another week 7 lecture on investing in cryptocurrencies.

Having gone through the lecture, I decided to undertake an in-depth analysis of the market and have picked two enormous coins between the ranks of 100 to 400 (in coinmarketcap.com) to compare and contrast and, ultimately, decide on which coin to settle for as a better investment.

I would bring out in a nutshell the crux of what they believe and hope to achieve and what necessitated their invention and launching into the crypto world.

I decided to settle for these two coins because of a few parameters like the market capitalisations and trading volumes that particularly caught my attention.

The VeThor Token (VTHO) is the secondary token in the VeChain Blockchain. This token is used as a "gas" or energy to fulfill smart contract dealings or transactions over the blockchain. It serves the same purpose as Neo's "gas" or Ethereum's "ether".

Invariably, the token finds its advantage and expression in the central goal purported by the father VeChain project whitepaper. In its white paper VeChain is described as a blockchain digital portal built for the enhancement of business processes and management in the supply chain.

VeChain aims to use the distributed ledger technology (DLT) in the fulfillment of its goals set out in the white paper.

With the use of this technology they aim to create a high-speed process and efficient system that enables businesses and smart contracts to be done in a very transparent manner.

VeChain aims to enable a 360 degree overview of all the information pertaining to a supply chain business as against the silo system compartmentalization of such information among different stakeholders.

Obviously, this promotes transparency and such smart contracts are to be undertaken with the VeThor Token (VTHO). See the full VeChain white paper.

In its white paper one of the major use cases explored is the decentralized finance (DeFi). It aims to bring speed, security and true decentralization in DeFi.

Nervos is designed to handle more than 24,000 transactions per second. Currently, no blockchain can achieve that. In the traditional finance ecosystem only Visa meets this minimum transaction.

So, in the project white paper Nervos is designed to handle large volumes of transactions solving the problem of speed in DeFi. The system aims to provide scalability. A lot of decentralized finance applications are expected to be built on the blockchain.

In this way different applications on decentralised finance can be accessed from one portal. There are a lot of other things contained in the Nervos white paper which cannot be exhausted here.

COMPARISM OF "SOCIAL REACH", "PROJECT PURPOSE", "TEAM" AND "RESPONSE FROM THE MARKET" OF THE TWO COINS

The VeChain Network that hosts the VeThor Token (VTHO) has a very huge followership on both Twitter and Reddit.

From the above screenshot it can be seen that they have over 215,000 followers on Twitter.

The screenshot below further reveals an over 108,000 member sub-reddit group.

These figures reveal a very huge acceptance and popularity among the populace. This is quite good and interesting as it means that a lot of people are probably ready to queue into the idea behind the blockchain.

Also the sub-reddit community has quite a good number of members of over 2,000.

VeChain, which hosts VeThor Token (VTHO), claims in its white paper that it intends to build a distributed transactions ledger ecosystem which will be trust-free; deliver smart contract transactions with high speed in an efficient and transparent manner.

On the other hand, the Nervos Network flaunts an innovative architecture of a blockchain with a uniquely-designed layer-ormat system. This system is meant to enable enterprises and businesses to host or launch their products, apps and services in one place. Also, it promises a high level of security, decentralization, scalability and speed.

At present, VeChain operates from about seven different offices located in different parts of the world including Shanghai, Singapore, Paris, Luxembourg, Palo Alto, Tokyo and Hong Kong. Equally they claim to have over 100 staff members and 50 application developers with high professionalism in the blockchain.

Also, they claim to be working with quite a number of universities including Tsinghua University, Stanford University, MIT, Oxford Mathematical Institute, Dartmouth College, City University of Hong Kong and South China Normal University in their pursuit of an R&D capacity blockchain.

The Nervos Network has a very enormous team of experts. Ranging from the co-founders to expert in research and engineering and experts in community and ecosystem development.

The co-founders include: Terry Tai,Kelvin Wang and Daniel Lv.

The two networks seem to have just enough teams to drive the idea behind their conception.

The VeThor Token (VTHO) has gained quite a lot of acceptance in the market. Actually, it is accepted as a means of exchange by over 21 market traders

While the Nervos Network has a larger market exchange gateways.

So, the market response has been quite good for the both coins.

This shows that both coins belong today the low capital market cap as they are both below $1 billion market cap. Therefore, there is no particular preference between the two coins when considering the market cap.

From coinmarketcap.com it can be seen that the both coins have a great acceptability in the market. That is to say they have a lot of different exchanges.

This does not represent a particularly high margin in difference. However, this goes to show that the VTHO has a higher daily trading volume. Hence, more VTHO coins are being bought or sold daily.

In this regard the VTHO is more in supply and, hence, usage.

I was not able to ascertain the active addresses of the two coins from any site on the web. However, the high trading volume of the two coins goes a long way to show that there are so many senders and receivers transacting on the two blockchains.

The lower supply of eth0 shows that it has the capacity to demand more supply and therefore higher the likelihood that it will eventually trade at a higher price.

From the in-depth analysis I have undertaken on these two low capital coins I have discovered that both have the ability of skyrocketing in price. Hence,both can serve as good investments.

However, I have come to discover that the VTHO has greater capabilities and potential and should, therefore, serve as the better investment to undertake between the two.

Hello @bukkyi4u ,
Thank you for submitting homework task 7 ! You have done a comparison between with VeThor Token(VTHO) and Nervos Network (CKB) a fundamental analysis ! Well explained with facts and the article is well organized. nice work [8]