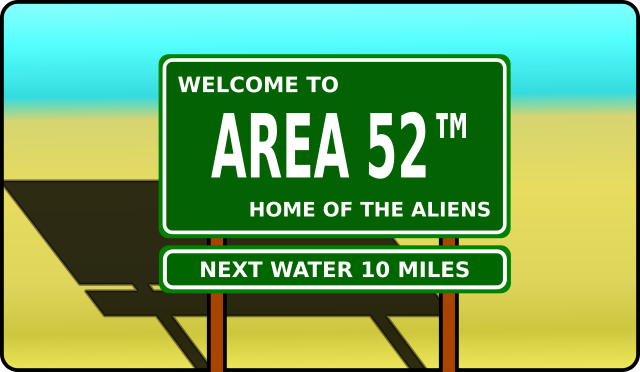 People on f-c-book have been signing up for an event to raid Area 52.
With over one million people signed up, what would actually happen if they showed up?

Well, it will either go one of two ways.

So, lets say that Area 52™ actually had secret military shit that the goven-cement wanted no one to see. What would they do when the millions of people marched over the hill? Well, judging by what govern-cements have done before, they would kill them all. They are ready, willing and able to do that.

Will the Area 52™ commander keep all of his soldiers in line? Probably. They are brainwashed to believe it is a matter of national security. Kill one million to keep 300 million safe?

In the end, one million people will be reported to have died of dehydration in the deserts of Nevada.

Is there anything in Area 52™?

This is actually a hard question.

There was. There is... There is an elevator that is so large you can park a couple of stealth bombers upon (and lower them underground)

Although in the past Area 52™ was used to store UFO parts and accessories, today it is used mostly as a manufacturing facility that can avoid OSHA regulations. (no, i am not kidding. Look up stories about the chemicals that were used to make the SR-71, and lack of safety to the workers.)

The stories i have heard from people that have been there... sound like stories.
Like there was this room, where the door was open, and the visitors could see this "thing" that was doing "crazy thing stuff" and then the people in the white coats notices them and says, "oops, we should have kept the door closed".

However, i have been told by many eye witness accounts of alien things that were collected and taken somewhere. To Area 52™ was the obvious place back them

Anything real has undoubtedly been moved to another D.U.M.B. already. One with a lot less people knowing about it and watching it.

Further, the REAL stuff is happening down in Antarctica.
The other real stuff is flying over our heads and can be seen at night with night vision goggles.

So, what will these people find at Area 52™ if those people actually broke in there?
Basically they would find them repainting one of the govern-cement built flying saucers.

All images in this post are my own original creations.
area52informationwarpalnetaliensufos

It’s part of much larger plan of theirs to overwhelm ALL known systems and blow things up to start new. Overwhelm immigration , free healthcare, free college etc....everywhere to bring down what has stood.

The problem is, it both works and doesn't work.

If faith can be maintained in the dollar, the system has unlimited money.
However, there isn't much faith left in the dollar
and they are printing money as fast as the economy can handle..

The problem, as Catherine Austin Fitts says, is that they are trying to fund two economies out of the same pie.

I feel it is just better for everyone to stop paying taxes.

I have a very strong feeling MUCH is being done with a “reset” or crypto related vehicle. They keep saying “a level playing field” at ALL levels — at the IMF, SEC, and some tech companies like Ripple. Why are they all saying the same thing? Something is coming quite soon.

The "level playing field" is the buzz word, the hook to get people in it.

They did the same thing with the Federal Reserve.
Saying there would never be a run on the banks ever again.

But, T.H.E.Y. are really trying to work on a crypto (because they are that much better than the current bank operations) that T.H.E.Y. control.

Fortunately, T.H.E.Y. cannot see what is good about cryptos, so their "cryptos" will be missing essential features and will fail.

can you show me what you see with nv goggles?

Here is one of the guys who filmed them. Watch his videos for clues on where to find the videos.