The Real Split in / of America 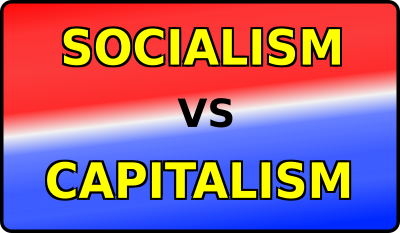 Is this the irreconcilable difference that will split America?

Not just Socialism vs Capitalism but the two wildly different types of people that are attracted to each camp.

If you take anyone of above average intelligence and drive, and you will almost always find them leaning towards capitalism.

However, the socialist minded are almost always living off someone else's labor. The need the group, whether they live off a trust fund or govern-cement welfare.

You cannot convert a socialist minded person to a capitalistic mindset because they feel their life depends on the socialist system. And in many cases, it does. Their life is literally on the line.

Now, the problem is we have a democracy (yes, we are supposed to have a republic) and a group of people have learned that they can vote themselves money from the community chest. And since they are now the majority, there is no going back.

What usually happens at this point is that there is a bloody revolution and one side smashes the other.

However, unlike most western European nations, America is BIG. Texas by itself is larger than many countries. So, we have another possible outcome. That is, we split up.

The socialist strongholds are almost all cities on the coasts. The rest of America is this giant expanse. In some places, if you were doing a door-to-door raid, there is miles to drive in between each door.

The real down to earth working people, the capitalists are all in one area, and the people demanding more welfare and open borders are in another.

So, the easy way out is to split up America.

If it is only the law of the jungle, you eat what you kill, then we just have the bottom half of society die off. And that really sucks.

But, if you don't allow your best and brightest to achieve all they can achieve, than lots of people starve to death.

And, the problem we truly have is that we have a govern-cement and a financial system that is parasitic. One that will not stop sucking blood until the host dies. But, that isn't brought up in this Capitalist Vs Socialist narrative.

The correct course of action is to have socialism on a very micro-scale. Soup kitchens for the hungry. Spare bedrooms for the homeless. And these have to be at the community level so that handouts can be easily monitored.
And we have capitalism on a macro-scale making sure trade happens on a level playing field.

Unfortunately, we have the exact opposite.
Where welfare is easy to take advantage of and crony-capitalism can run rampant.

Since the capitalists do not have the will to fight (its bloody, and there are consequences) they will most likely not attack the socialist cities.

And since the socialists do not really have the will to leave their homes (its dirty and messy out there) they will most likely not leave the cities. They like going to places and mobbing up against weaker opponents. But, if they have to travel miles from house to house... they lose their drive really fast.

So, unless something changes, such as capitalists become convinced that its do or die (then they will wipe the cities from the face of the earth) or somehow the socialists become in charge of the military AND get more funds AND every snowflake feels its their duty to join the military (then they will have the manpower to slog across the fly over states)... well then, America is going to break apart.

All images in this post are my own original creations.
civilwarinformationwarpalnetsocialismcapitalism

Socialism is nice. But tyrants rule social nations. So, socialism is not socialism. It has not been socialism. It is a delusion. Theoretical socialism or communism would be a utopia. But in the real world, capitalism has helped a lot of people in actuality, practicality.

The big problem with "pure" socialism is that there isn't any reward for the highest producers to produce highly. "They pretend to pay us and we pretend to work"

And pure capitalism would be nice, but central banks rule capitalist nations. So capitalism is crony-capitalism. When rules are about money, money makes the rules.

True. That's why we promote cryptocurrencies to minimize central banking control. Yes, there is a lot of cronyism going around. That's why putting money systems on the free market helps.