The End of Captialism! 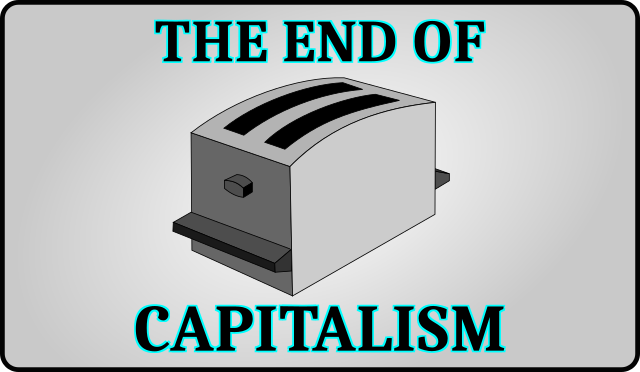 Many people talk about manufacturing moving to robotics and how that will destroy all the jobs...

But, what about the other end?
What if no one needed anything manufactured any more?

Let us take the now, ubiquitous, toaster.
There was a time when homes didn't have electricity, where toasting some bread meant holding it over a fire.
Hell, we didn't even have sliced toast before Betty Grable.

So, a lot of toasters needed to be made.
300 million americans, so about 300 million toasters.
The things used to be scarce and was quite the show piece in the kitchen.
Now it is ubiquitous, and if you really wanted a toaster, i am sure you could knock on three doors, in any neighborhood, and someone would give you a toaster.. or two.

And if we built toasters like we did back in the 50s with actual modern technology (MOSFETs, digital timers) that one toaster per person would be all that was ever needed.

Lets say we made the ultimate toaster, and it could always be repaired.
So, there comes a time when you no longer need to manufacture toasters.

Now, even the robots are out of work.

This situation may seem weird, well, because all the "economics" classes have stated that people's appetites are insatiable, but it is not really the case.

Many people are going without a car now.
This would be unthinkable back in the 50s, where the car was seen as the ultimate in personal freedom.

And the things that has most people buying a new one every year are computers and smart phones, however, these are reaching the limits of what is needed. The iPhone of a few yeas ago already reached the limits of what a human eye could see. Soon, the processing needed to push to that resolution will be achieved... and then, nothing.

There is no more need of bigger, faster computers.
The things they have super-computers doing is actually pretty blah. And in all the cases it turns out with a little programming insight, it could be done on a personal computer.

So, in many ways we are coming to the end of the manufacturing as both job and need fulfillment.

What will we do then?

First off, get rid of mortgages.
The only reason that 60% of us are still working is because the mortgages have to be paid.
We are paying over 3 times the house cost to a bank who provided nothing.

Once homes are the possession of the people living in them
Then we have to worry about food.

But with things like piped water irrigation, timed sprayers, motorized tillers, growing your own food has never been easier. In fact, there is a book on how to grow all your own food with 10 hours per week.

After this, what is necessary?

Enough to keep the power and water on.
And these can best be handled by locally providing them.

We see all kinds of stores closing.
The malls are shutting down. And now, even the electronics super stores are disappearing.
Every "analyst" is saying this is because of on-line shopping.
But that is not all of it.

There is a global financial slow-down... and it is not just the economy.
People are getting to the point of enough.

Tiny house / apartments do not allow for lots of stuff.
So, you keep what is essential and beneficial and discard the rest.

And with this shift comes an ever shrinking pool of stuff-buyers.

The conclusion of which is, the end of capitalism. (as we know it)

All images in this post are my own original creations.
informationwarcapitalismjobstoasterrobotics

I love freedom to decide what I want to buy and sell. I love the free market. I believe in promoting that right to allow each individual to buy and sell whatever.

Beyond that, I believe in individual private property rights over community owned property. Robots can be good in the same way Facebook could have been good. It depends on whether technology is centralized or decentralized. It depends on what can be remote accessed through backdoors.

I prefer real cars over smart cars. I prefer things like Steemit, this website, over smart phones and smart houses and smart grids and anything with the word smart in it because of China, globalism, the tech cartels, the backdoors, the centralization, the remote access, the censorship, the mind control, etc.

I promote freedom over safety. I believe in free market values over evil crony capitalism and other things. Keep in mind that crony capitalism is fake capitalism. I believe in letting people decide how they want to live, what they want to have or not have. If there is higher demand for certain products and services, then those demands can be met. That's competition. But the demand can be made by individuals, by each person. See, each person has that freedom to demand things, to want things. They can also choose not to as well.

You make money on Steemit thanks to capitalism.

Making money off money is not real capitalism.... just sayin'.

Depends on your definition of capitalism and there are different types of capitalism, and we don't live in a perfect world of just one thing. We live in a world of many different forms of government and other things.

Ummm, i don't know why you posted this? Looks copy-pasta.

Further, you don't actually state anything about capitalism.
Neither the original meaning, nor the modern adulterated meaning.
So i am confused.

It looks like we agree on many of the same things... except definitions.

Capitalism is the free market, is it not? There are different types of capitalism. If you have a different definition to capitalism, that means you are probably talking about cronyism, AKA crony capitalism, or possibly aspects to monopolism and corporatism and possibly even plutocracy and other things as well. We live in a world with a bunch of oatmeal. A bunch of original oatmeal. I type everything by hand. I write a lot on the Internet. That probably means you never Googled me. But regardless, there are different versions of capitalism. I like freedom. I like money. I like robots. I like to buy and sell. I like to trade. If that is bad, then please sue me. I that is bad, then come kill me. I believe in promoting freedoms. If you want to buy an awesome car, then good luck. If you do not want a toaster, then how about an open fire?

Capitalism is usually described as producing excess value by selling something for more than the labour that went into it. This creates two general classes: labourers and capitalists.

The free market is just an open exchange/supply and demand model... this can happen anywhere. It just so happens that our government’s mandate is to protect the “free” exchange of goods. But capitalism isn’t the free market...

@mastersa, are you against making a lot of money? So, if you had a trillion dollars, would you scream and try to get rid of it? I want to make government smaller. There are different definitions to capitalism. When I say capitalism, I am talking about free markets. But if you are good at business, you will have excess because of profits and that is good. I love money. I love profits. Capitalism is the free market. But you are talking about crony capitalism and not free market capitalism.

Free-market capitalism is the combination of free-markets and capitalism.
We have neither, right now, in The US.

Capitalism is the personally (not govern-cement) owned acquisition of all of those capitals, and putting them together to make a product to sell at a profit.

We used to have college courses on ways to raise capital. Basically, that is what a business degree was. Today, you just borrow the money into existence and then use that to acquire capital. (or theft by banking)

I do not have any trouble with what your wrote, it just seemed, to me, non-sequitur.
As i said, "i was confused"

That's what I said. You said what I said but in different words. But at the same time, there are different things out there. You seem not to want to talk about Rothschild for example. You seem not to talk about the collusion between big tech and governments. I love free markets. I love private property, capital, of land, and everything. I do not like cronyism. I do not like centralized money through the central banks and the Not-Federal Federal Reserve. I do not like George Soros. I do not like JP Morgan. I love the fourth amendment. I love gold over fake money and debt, all the borrowing like you said.

It sure is interesting watching as people reduce what they buy and have as we seem to have reached saturation point.

It is one of the most interesting things.
i wonder how much of it has to do with: The baby boomer had parents out of the great depression, who saved everything. And so the baby boomers acquired lots and then, acquired more. Got storage sheds and filled them...

So, are these later generations not hording as much because they haven't had the store being empty feelings?

Still, most books are in pdf. most movies in mp4. Why keep the big bulky things around?
Why buy a Cuisinart when you chop things for one, only once a day?

That could be a big part of it. I know my baby boomer parents kept lot's of stuff and I have though not as much as them. And over the last 6 months I have been cleaning out my life of stuff. I have been selling, giving away and throwing out stuff. All this extra stuff I have had just keeps me enslaved by having to store it, clean it, move it to get to something else. And it all just deteriorates over time and eventually become completely useless. I just want enough things to make life practical like shelter, clothing, food and a few items that bring me joy or fun and a few tools etc.

My land lord isn't on-board with this idea. harrumph.

Damn crapitalusts.
Always wanting to use fear and violence to keep us busy earning them wealth.

@builderofcastles This is an interesting way to look at it! ... like we always assumed capitalism could dominate in perpetuity, but our demand isn’t linear!

On the practical side though, could you give us more on the mortgage points? I totally agree that we only work to pay the bank for no value added... but it’s not yet clear to me how we build the houses and own them. I get we need a new system but do you have any more ideas on what that looks like?

I have written about it before, i will write it again.

You have heard of the Amish raising barns?
Well, we could build houses that way.

With modern construction practices and cheapness of materials a house shouldn't cost more than three months of labor.

A master carpenter, by himself, can build their dreamhouse in about 3 years. And this is with all the bells and whistles. Having a crew, specialized in each step cuts the labor down tremendously.

So, an apartment should cost a person 3 months work. A grand house should cost no more than 3 years. So, how do we have 30 year mortgages?

I believe we go about building houses completely backwards. We shouldn't kick kids out and say, go get your own house. We should help them build their first house. Probably as a Highschool program.

Love the high school program part! That would be awesome, having a project in school for them to work on until completion. Then you’re set up! I am seriously going to consider this as an idea for our kid.

It is actually cheaper than sending your kid to college.