The Coming $100k Bitcoin Parties and Buying That Lambo 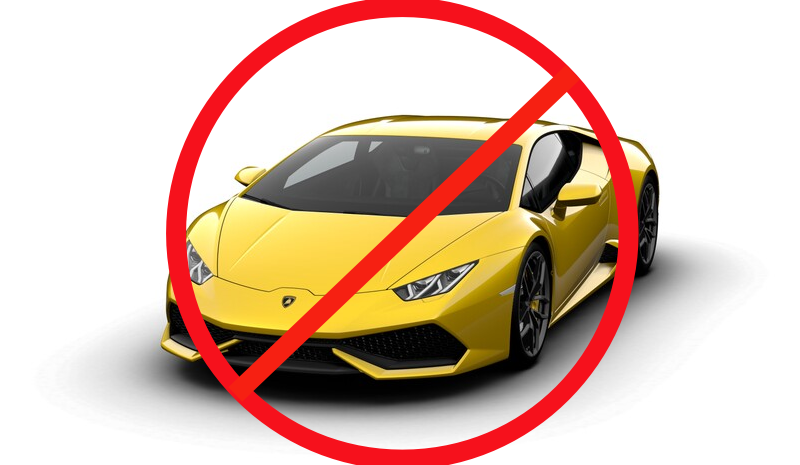 And the most important thing about this level is that it is a point at which many bitcoin millionaires will start to trade bitcoins for physical things.

AND! the number one thing that future crypto millionaires talk about is buying that Lambo.

i hate to be wet blanket on the crypto parties that will be happening... BUT

Along with the population rushing into bitcoin there are going to be several things also happening.

So, just when you got the money to buy a Lambo, you will find it the worst investment you can make.

You will probably be able to drive it for a year before it will be too dangerous to be seen in it on the road. Already people are showing anger at things like mere Porches driving by. It is going to get worse.

Further, the roads aren't going to get fixed, they are only going to get worse. (muh roads anyone?)
A car with thin fat tires does not do well on broken roads.

And, this is the time you really want to buy farmland and all the equipment to feed yourself. Growing food in the near future will require a greenhouse. Energy for heating homes will be at a premium, and so, get an earthship or a well insulated house. Make sure it can survive baseball sized hail.

Electricity will become more and more sporadic as the power lines are destroyed by ice or roving bands of the lost generation. So, having alternative sources of energy is a good plan.

Food is paying 12-18% ROI... and it will be an even better performer in the coming years.

In the end, buying a Lambo was a neat idea, for when we had a society that admired self-made people. It was the ultimate status symbol. It is just so sad that almost at the exact time when many early crypto adopters could afford a Lambo, it is also becoming a boat anchor tied around the ankles of those who will be drowning in the coming floods.

All images in this post are my own creations.
lamboinformationwarcryptopalnetbitcoin

Sure won't be a good thing to be seen in a lambo when the world is crashing around us. Best put that money to better use.

But... the Canonball Run. Loved that movie as a kid.

BUT, yes, lots of better places to spend that money.

Cannonball Run I remember that movie😀

what a beautifully bleak picture : )

Sorry, there are lots of better things coming, like the end of govern-cements and crypto adoption, however i really want people to think of the idea of getting a farm... before its too late.

Ah there is no need to be sorry.

I loved it. I could have been a lot clearer

I stopped wanting a Lambo about halfway through college, long before I could even think about affording one. I saw kids my age driving around in their lowered American and Japanese "sports cars," scraping on the ground everywhere they went, constantly chasing maintenance on their high octane turbocharged rides. A Lambo is just an even more expensive version of this liability. Hot rodding is supposed to be fun, and buffing some paperweight with a diaper and using it only to show off your wealth, that don't sound like fun to me.

Now, all cars look the same.
Most people can't tell the difference between a Lambo and a Ferrari.
Further, they can all be leased... so they're not as good at getting the chicks.

Today, they are a money sink.
Most people hate their commute so much they would rather live without a car.
Gas, tax, licensing, insurance, thin-blue-line fees... they all make it less and less about freedom and more about a boat anchor.

And then, there is the impracticality of having a sports car.
as you have pointed out.

Also the pork will be crazy expensive due to illness in the Chinese pig farms. As a real Viking that will be what my btc will be used for. Freezer upon freezer with pork!

Lot's of good points. Have you seen the new documentary called American Swamp? S01E04 is all about the failure to keep up infrastructure in the USA. I found it very enlightening. How not keeping up with good road, plumbing and the lot is actually costing more than it would to actually fix and update the issues. Wild word. Good post.