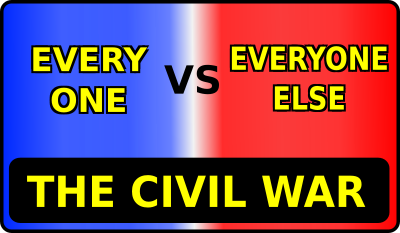 Many say that they see, in america, a second civil war.

There are two problems with this

Violence has already started.
More importantly, at least two sides have stopped yelling slurs, and are now dehumanizing the other side.

The other side is literally "nazis" and its ok to punch a "nazi."
It is ok to use whatever tactics you need to to win against a "nazi".

And thus ends civil debate.
And when debate ends, there is only a small amount of time before fighting starts.

The reason why most people do not see that we are already in a civil war is that there aren't really two sides.

There are a lot of groups that aren't getting their needs met. (this has been caused by two party puppet politics) And this has been spun by the media as "their" fault. That group over there is the cause of all your woes. The only group that isn't being oppressed is "white, cis-gendered, males". Everyone else has a "bad guy" out there that is making things bad. And, they should die.

Further, there are many irreconcilable differences.
Such as abortion. Pro-life vs Pro-death . or . Pro-choice vs Pro-slavery

There is no easy solution between two very strong positives. Pro-life or Pro-choice. Which is more important. Further, women, who really should be speaking out about this, aren't. Many women describe a very intimate connection to the fetus, even before knowing they are pregnant. So, how on earth are we still having a discussion that "its just a pile of cells"? (Unless you want to take into account a group that has been trying to destroy God and spirituality in all things.)

This is just one example of a very polarized (not polarizing) position.
There are many more.

So, this civil war will be the:
blacks vs the whites
Pro-life vs Pro-choice
Right vs Left
Anarchist vs Statist
Anti-vaxxers vs Pro-vaxxers

There won't be two, big armies, with color differentiated uniforms during this civil war.
Instead, there will be many "nights of the long knife".
There will be many small group insurgencies.
This will be neighbor vs neighbor.

Fortunately, several HUGE factors are taking place that will help... well, if you consider flooding a help...

Areas of america are already greatly localized.
People of a feather, have really flocked together.

And so, we will see a split up of america as opposed to huge amounts of bloodshed.
The Pacific northwest will break away first.

But, break ups of imaginary lines are not all.
We will see a huge break up of america as the Missisippi valley washes out.
As glaciers start to form, and weather patterns shift.

Crop failures and food shortages will turn many people's squabbles aside, while the focus on surviving.

Along with huge leaps in defense technology, this "war" will not go as anyone has thought.

All i can say for sure is get ready to move.
If you are not already in a community that is working on self sustaining life-style, then you will need to find or make one.

Cities are where most of the hacking and slashing will take place. First as the left-ish mobs start mobbing. (if you are not a left-ish type person, seriously make plans to leave the city) And then later, cities will become death traps as one failure or another brings the complex (electric, water, fuel, food...) city supporting structures down.

None of this sounds good, however, getting through this will bring peace on earth.
There will not be any WW III.

All images in this post are my own original creations.
civilwarinformationwarpalnetnot-cbalkinization

When the next financial collapse materializes, this conflict will be epic. Millions will die and there will be a period of total anarchy. The smart ones have been preparing for this event for years. It is time to hop onto the same bandwagon.

Its hard to tell what will happen with the financial collapse. If enough convert to cryptos, it may be a non-event.

However, i don't see a lot of people moving without a push. And so... hard times. I don't want to deal with all the dead people, but i also can't feed everyone.