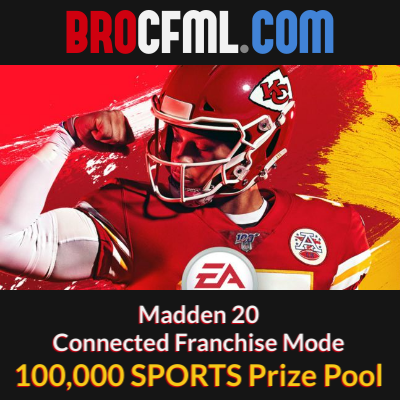 This Friday we start our Season 5 Draft and have a few teams left open for new owners. , the 9th fastest growing Madden Twitch stream!

Last season's winner was @ats-david who's Jaguars were dominant all season long and despite getting down a couple of scores in BRO Bowl IV, came back to blow away the Panthers.

For Season 5 we're moving from Madden 19 to Madden 20 and updated our mod to near perfection for very enjoyable high scoring games. There won't be many 10-9 games this season that make you want to make biscotti instead of watching, we're talking 40-30 point games baby!

Once again it's Free to Play, but we're also offering some paid options that will boost your team to the next level and help you win your share of the 100,000 SPORTS + 1,000 SCR Prize Pool. Paying BROwners will get first choice of teams along with more livestreamed games and other perks only available to them. So consider upgrading your team because it also helps us feed the gerbils who keep the computers running.

See you on the field!

Thanks for hosting this great league! Excited to participate again and hoping I can win the whole thing this season! Goooo LIONS!

awww, the Lions! how adorable!

I'm the champ! And I'm going to dominate this season just like I dominated last season!

I am both the unstoppable force and the immovable object! Come get some, you Madden peasants!

You are the returning champ, but this is a whole new ballgame! This is Mikey's league this season!

Looking forward to see how this works out for everyone.