BROCFML Playoffs Are Set - Watch the Wildcard Round Live Tonight! 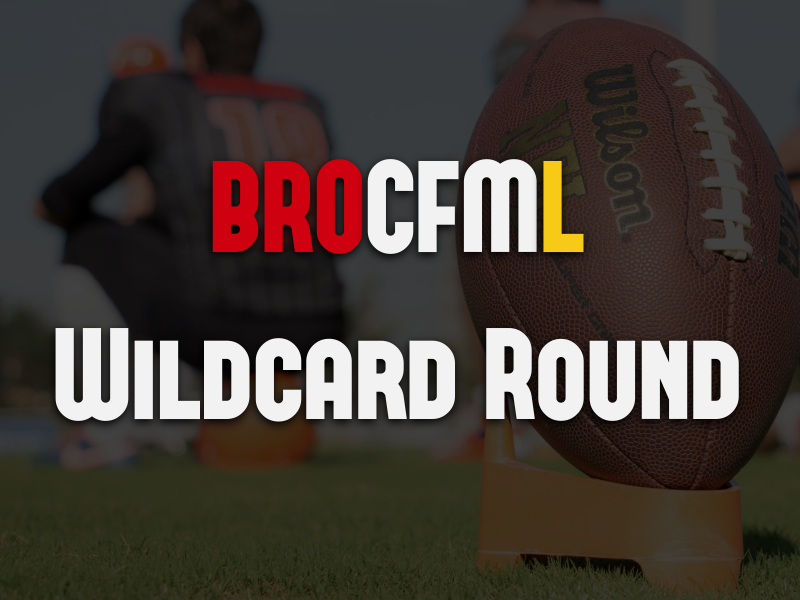 Our first live AFC Wildcard game tonight is the Browns (10-6) @ Ravens (11-5) owned by @inthenow. After that the NFC Wildcard Bears @ Saints owned by @celsius100 will be featured.

Browns @ RavensThe Browns take an early 3-0 lead on a field goal only to watch the Ravens march down the field convincingly with a TD from Wentz to their tight end for a 7-3 lead.

Late in the 2nd quarter the Brown's retake the lead with their own TD pass to their tight end, 10-7 Browns. At the half it's the Browns with the lead.

Early inthe 3rd quarter the Ravens Gilmore intercepts the Browns QB Brissett to change the momentum in the Ravens favor. Halfback D. Johnson has been a force all night for the Ravens with over 150 yards rushing already in the 3rd.
With the Ravens poised for a chance to at least tie the game deep in the Browns territory, the Browns get the turnover they need, forcing a fumble from the QB Wentz and takeover at their own 15 yard line. Luckily the Ravens were able to force a punt and get the ball back.
k.

Late in the 3rd, the Ravens mount a nice drive with a 25 yard completion from Wentz to get them into the Browns territory, followed by a nice gain to tight end Brate.
The quarter finished off with our score still 10-7 Browns, but the Ravens are threatening with running back Johnson continuing to carve up t10 lead.

On t Browns insuing d drive, once again the Ravens cornerback Stephon Gilmore intercepts Brissett to give the Ravens the ball at midfield with a chance to increase their lead.
On this drive D. Johnson is now over 200 yards rushing and continues to rush for big gain after big gain against the porous Browns defense. After several rushes by Johnson, Wentz fires a TD to Brate to give the Ravens a 21-10 lead with 10:45 left in the ame.

With 9 minutes left int he game the Ravens cornerback Amos snags a Brissett pass and takes it to the hizzy for 6 and a commanding 27-10 lead to all but wrap this one up for the Ravens.
In a weird play, the Browns block the extra point, but the Ravens holder recovers the ball and runs it in for 2-points giving the Ravens a 29-10 lead!
With under 4 minutes remaining the Browns add a score to cut the lead to 29-17, but this one is all but over. The Browns try the onside kick, but it fails as usual. Onside kicks fail 80% of the time when the opposing team is expecting it.
The Ravens continue running the ball to eat up the clock and eat up any remaining hopes of the Browns season continuing. D. Johnson is now over 250 yards rusihng for the Ravens and should be player of the game.
After a few kneel downs, this one is in the books with our final score, Ravens 29-17 Browns. ns. Congrats @inohenow!

The Bears can't do much with their opening drive and punt it away to the Saints as they start at their own 12 yard line. The Saints get going quickly with a 49 yard one-handed grab by Ashlon Jeffrey. Moments later the Saints punch it in for a 7-0 Lead.

Russell Wilson continues his hot hand as he connects with wide receiver Allen for a big 37 yard gain deep into Bear territory. However the drive stalls and they have to settle for 3 points to increase the lead to 10-0.

The Saints continue their shutout by adding another field goal early in the 2nd quarter to take a 13-0 lead in what so far is a dominating performance.

The Bears finally show some life here in the 2nd quarter getting the ball into Saints territory with some nice passes from Nick Foles to their tight end and wide receiver Danny Amendola.
With just under 8 minutes left in the 2nd quarter the Bears draw blood with a quick pass from Foles to Corey Davis to make it a 13-7 lead for the Saaints.

With just over 5 minutes left in the 2nd quarter, the Saints once again get into the endzone with a 5 yard run by Lindsay to make it a 20-7 game.

The Bears get a great leaping grab for 33 yards out of Josh Doctson to keep things interesting as we near halftime.
Unable to do anything further with the ball the Bears are forced to punt it away near midfield and give the Saints the ball back with under 2 minutes left in the half.
The Saints work the ball into the Bears end quickly with passes to Allen, but the Bears come up with a clutch interception from Kurt Coleman in the end zone to keep the Saints lead at 13 points.
With under 30 seconds left to play the Bears try to get a long pass off but the Saints defense manhandles Foles with a sack for a long loss. The Bears are left to just run the clock out and rethink thingd Half

With Russell Wilson in charge, the Saints drive down the field quickly and get the ball inside the Bears 10 yard line with ease. Tyreek Hill follows that up with a TD catch from Wilson to increase the lead to 28-7 after the Saints go for 2 points with Gurley.
The Bears come right back with a nice drive with mainly rushing from Mack and get the ball deep into the Saints end. It didn't take long after that for the Bears to capitalize on a Saints blown coverage with a 25 yard pass to the halfback in motion out of the backfield. The score is now 28-14 Saaints.

Todd Gurley is starting to pick up the pace as he is now over 100 yards for the day late in the 3rd quarter. The Saints have the ball inside the Bears 15 yard line and are threatening to answer back.
The Saints come up just a little short on 3rd down and end up going for it on 4th and inches and Gurley decides that instead of getting the first, he'll just punch it in for a TD instead. Saints increase the lead to 335-14.

The 4th quarter doesn't start out as the Bears planned as the Saints McCourty picks off the pass and returns it 37 yards for the pick 6. Saints are running away with this one now at 42-14.
With just 12 minutes left in their season, the Bears can't do anything with the ball and are forced to go for it on 4th down only to have the Saints sack Foles for a loss to turn the ball over.
Wilson finds Olsen for a 25 yard gain to get the Saints near the redzone and start putting Gurley to work running the clock down.
Gurley breaks a few tackles to claw his way past Bears defenders to wrap this one up with only 9:20 left in the game. Saints 49-49-14.

with 1:09 left in their season the Bears tack on a meaningless field goal to make it 49-17 Saints. And that's where this one ends, along with the Bears season. Congrats @celsius100!

Livesssly in the 4th the Ravens take the lead with a jet sweep to Gabriel for the score and a 14-10 lead.

This post will be updated as the action unfolds.