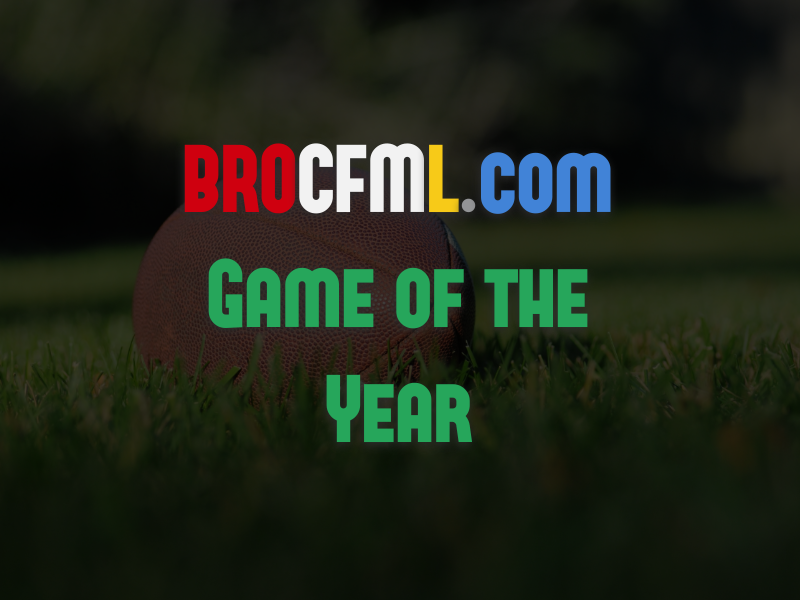 Game of the Year

This is our best game of the year so far with two undefeated heavyweights going at each other. Both the Cowboys and the Lions come in with perfect records at 9-0.

Tune in below or at BROCFML.com to watch the action unfold and root for your favorite team!

The Lions get a field goal to cut the lead to 7-3 before the 1st Quarter ended, but the Cowboys drove right back down the field with a big play to Sherman to get the ball inside the 2 yard line. The Lions came up big though with 3 stops to push the Cowboys back.
Then the game changer happened when the Cowboys decide to go for it on 4th down but the Lions pick off the pass and return it to the house for a 101 yard Pick 6 and take the lead 10-7! This is the longest interception of the season to date.
https://www.twitch.tv/videos/48323239104

The Cowboys added a field goal to tie the game up 10-10 late in the 2nd Quarter then the game slowed down a bit without much offensive action. With under 2 minutes left in the 1st Half the Cowboys got the ball and started mounting a drive but Andrew Luck turned the b
https://www.twitch.tv/videos/483240986all over with another interception and the Lions took over.
With under 30 seconds remaining in the 1st Half the Lions tacked on another field goal to take a 13-10 lead into the half.

2nd HalfEarly in the 3rd Quarter the Cowboys get a field goal to tie the game up at 13-13. Then the Lions get the ball and a nice drive but stall in Cowboys territoory. They bring ot the kicker to try to retake the lead from distance, but the kick is wide right, keeping us tied midway through the 3rd Quarter.

The Cowboys seize the momentum and instantly drive into Lions territory with passes to Brown and look sure to take the lead with McCaffrey headed into the endzone but BOOYA! he's hit hard and fumbles for the first time all season, giving the Lions the ball back deep in their own end.
https://www.twitch.tv/videos/483249216
After the turnover the Lions march down the field with Brady to Hopkins repeatedly connecting into the Cowboys side of the field, but they ultimately stall and settle for a field goal from Gano to make it Lions 16-13 Cowboywboys.

It didn't take long for the Cowboys to respond as McCaffrey makes up for his earlier fumble and breaks off several Lions tacklers for a long TD run to give the Cowboys the lead 20-16 early in the 4th Quarter.
https://www.twitch.tv/videos/4832251037

The Lions get the ball back but ultimately can't do anything with it and have to punt it back to the Cowboys who promptly march downfield deep into Lions redzone, but the Lions defense holds forcing a Gostkowski field goal to make it a 7 point game at 23-16 Cowboys with the lead late in the 4th Quarter.
With time waning away on the Lions they try to tie the game up with a long drive, using Kyle Rudolph mainly who has now gone over 100 yards on the day. A pass to Smith-Schuster takes the Lions to the Cowboys 15 yard line and things are looking good for overtime as Elliott joins in the action with a few runs to get them even closer to pay dirt.
However the drive stalls inside the 10 yard line and with what may come back to haunt them, the Lions choose to kick a field goal on 4th down instead of attempting to tie the game up. Still 4 points down at 23-19 the Lions need their defense to step up and get a stop on the Cowboys.
.

More highlights to come throughout the game.# Late in the 4th QuarterThe Lions get the stop they need and have the ball at their own 30 yard line. Brady hits a couple of passes to bring the up to midfield and on a 3rd down and 1 Brady launches a long throw to Hopkins to them down to the Cowboys 25 yard line. Things are looking up, but 3 consecutive stops by the Cowboys have the Lions facing a 4th down and 4 and they must go for it with only 1:10 left on the clock.
https://www.twitch.tv/videos/483257778
And that's how it ends with Byron Jones coming up clutch in the endzone to save the game for the Cowboys 23-19. Some may question Brady's decision on 4th down to go for Hopkins in the endzone when he had a wide open receiver underneath for the first down, but that's for armchair quarterbacks to talk about.
This game was everything we thought it would be going in, a tough fought battle by two of the elite teams in the league. We hope you enjoyed today's game brought to you by : @Beat-the-Bookies, @FitCoin and @BROsino ... thank you and all of our upvoters for your continued support!o come throughout the game.