Why Do Cops Belong In The Abyss? 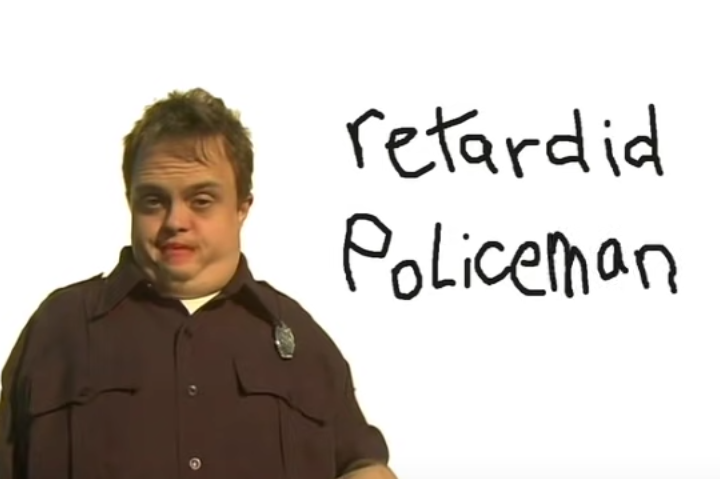 1. Why did Whatcom County Sheriff’s Deputies arrest me for not standing in the precise spot in a field they told me to stand – but they wouldn’t even respond to me when I clearly documented that Wells Fargo had forged a paper trail, in violation of multiple state criminal codes, to fraudulently foreclose on a home they didn’t own the mortgage to?

A. Because like most worthless sacks of garbage who force perfect strangers to pay them for their services – this is the quality of service you can always expect.

2. Why did the Lynden Police Department pull me over multiple times for made-up legal violations, lie to my face every time when I confronted them about it - but didn’t do anything about pedophile officer Don Glunt when people in the community knew about his professional misconduct for decades?

A. Because when you cosplay like “autistic batman” and enforce the political opinions of the most mentally ill people in the country (liawyers and politicians) – you can always be counted on to act like a worthless piece of shit, and shield each other from accountability.

3. Why did the Spokane Police Department, and Spokane County Sheriffs, completely ignore the evidence I gathered proving that Wells Fargo used a forged beneficiary declaration to fraudulently foreclose on my neighbor’s home in 2013 in violation of multiple state criminal codes?

A. Because when you have the IQ of a radish, and acting like a pussy frat-boy on a “hall-monitor power trip” is just a typical day in your “thin blue line” life – standing up to powerful people takes the kind of balls you will never be able to grow as a person because of your severe character deficiencies.

4. Why did the Ferndale Police Department initiate the force continuum to stop me for simply spinning my muddy tires from my own muddy driveway - but they didn’t take any action when a Ferndale police car sped around a corner in front of me (with no siren or lights) and threw a hubcap that could have struck a bystander?

A. Because when you are part of a cosplay gang that operates with no real accountability to the public – you tend to attract the kinds of shit-bags for officers who deserve to be ground up in a chipper shredder, not real people of honor and value.

5. Why did the Federal Bureau of Investigation come after me when I documented that big banks were forging documents to fraudulently foreclose on homes they didn’t own, and the money was being laundered into the state and federal employee retirement systems all over the country?

A. Because badgefags are worthless corrupt felons at every level they engage in badge-faggotry – local, state, and federal. Badgefags of a feather rape the public together.

6. Why did Mineral County and Prairie County Sheriffs completely refuse to investigate violations of Montana criminal code committed against me, and then either lied to me, or ignored me as to explaining the reason why?

A. It's the same reason that God will take every badgefag in these organizations, send them into a wood-chipper feet first, and then cast their lying, limp-wristed, pussy asses into the Abyss for a couple eons to become the lead role in real life SAW movies for people of decent character to enjoy – because they are sociopaths.

A. Because like every kiddy-porn trafficking faggot weirdo in society – they all look out for their own type of people.

A. Because when you want integrity and honesty – the last people you should ever count on is cosplay weirdos, with autistic batman utility belts, whose wrists are too limp to accurately shoot 10mm.

9. Would you consider me a criminal if I came to your door and said: “Hello, I’m going to protect you now. I see your home is worth about $200k, so I’m going to charge you twice the rate I’m charging people with a $100k home, but that’s fair because I’ve determined, with zero due diligence, that you can afford it. If you refuse to pay me, I’ll auction your home to collect. If you resist, I’ll escalate the force continuum against you until death if necessary. There is no contract for my services, so there’s no voluntary consent, no meeting of the minds, and no mutual obligations we both must honor. If I am negligent or maleficent in my services – you and the community are 100% liable for any damages - not me.”?

A. Of course you would, but badgefags won’t even consider working together with the community to build a moral system because they are so mentally ill that the only logic and reason they could ever comprehend is a baseball bat, covered in barbed wire, smashing into their numb skulls.

10. Why do badgefags put “To Protect And Serve” on their tactical-barbie patrol vehicles?

A. Because when your actual conduct doesn't adequately convey to society what your duties and obligations truly are – why not try a little advertising and propaganda?

What is the difference between (1) a guy you catch sniffing through some girl's panty drawer at a party, and (2) a guy who says "If she isn't doing anything wrong - she's got nothing to hide."?

Nothing, they're the same exact type of person.