Tracking the Unique Value Proposition of Bitcoin by Christopher Brookins

The data for bitcoin offers a slightly different view than the one typically heard in the relentless 24/7 crypto news cycle. To understand why it’s important to put the invention of money in a historical context.

In David Graeber’s seminal book, Debt: The First 5,000 Years, he notes that throughout history governments have created commerce markets by minting a national currency out of thin air, with zero intrinsic value, distributing it, then forcing ‘tribute’ in the form of debt repayment schemes; typically to finance or reimburse war efforts. In a similar vein, author Yuval Noah Harari explains in Sapiens, that money is merely a figment of the human imagination and has no value beyond humanity’s ability to create a convincing narrative founded on mutual belief.

How does this apply to bitcoin?

In 2019, bitcoin’s strong performance has reinvigorated maximalist arguments, which typically purport scarcity as its only value driver. However, daily data provided by Blocktap.io, suggests that this notion is not entirely true. Furthermore, the data suggest that the narrative is, in fact, the other way around as per David Graeber’s findings.

Since 2010, using a least-squares model with the natural log of price as the dependent variable, we evaluate relationships via coefficient sign and significance, and strength by R Squared.

The time-series data shows that the GROWTH in the outstanding supply of bitcoin, over time, is strongly and positively correlated to price with an R Squared of 0.921.

Sometimes historical data can skew results, especially as the bitcoin market was nascent in its early days. So, we analyze more recent times, since 2017, to verify our initial findings. We see a breakdown in the strength between price and outstanding supply growth, which generates an R Squared of only 0.347, but still a positive correlation to price.

We suspect the breakdown in relationship strength is due to growing demand in the market, both speculative and fundamental. Including both supply and demand in our model, we see a positive correlation for both variables and stronger R Squared of 0.751.

Note: SF and flow both had positive correlations (even flow), but their R Squared values were demonstrably worse with almost no significance.

The “immaculate conception” and subsequent growth of bitcoin’s supply are verified as strong historical price drivers, perfectly in line with Graeber’s findings. However, since 2017, narrative-driven demand has played a greater role in driving price, more in line with Harari’s work. Furthermore, the scarcity narrative has ignited a reflexive feedback loop, i.e. increased demand against a fixed supply will increase price, which increases demand, which begets further price increases, in line with the work of George Soros.

To quantify demand’s growing influence on price, we use log-log linear models, which allow us to analyze the elasticity of demand proxies to increases in price.

The data for bitcoin offers a slightly different view than heard in the crypto news cycle. The narrative that BTC’s scarcity is the only factor driving price is simply false. In reality, the more likely scenario is that a growing (but fixed) outstanding supply of BTC created a market, which created ‘believers’ or HODLers, which created a narrative, which created buying demand, which created a self-reinforcing feedback loop, which created more demand. 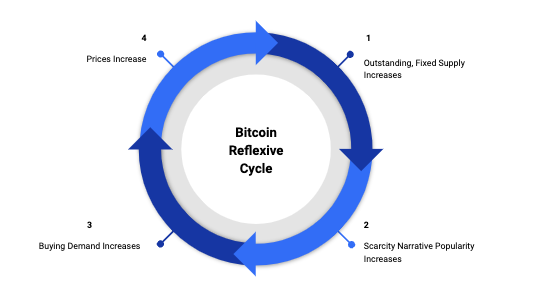 As long as bitcoin’s narrative and reflexive feedback loop continue to thrive, so will its price. Given the current macroeconomic and geopolitical environments, a bet on the former seems prudent.

About the author
Christopher Brookins is the Founder and CIO of Valiendero Digital Assets, a quantitative cryptocurrency investment fund, founded out of Carnegie Mellon University. Valiendero utilizes machine learning and data-driven investment strategies over a variety of liquid digital assets, which have consistently outperformed relevant performance benchmarks. Chris has been involved in the crypto space since 2014 and frequently contributes to news outlets like CoinDesk and Brave New Coin with data-driven analytics and valuation indicators.