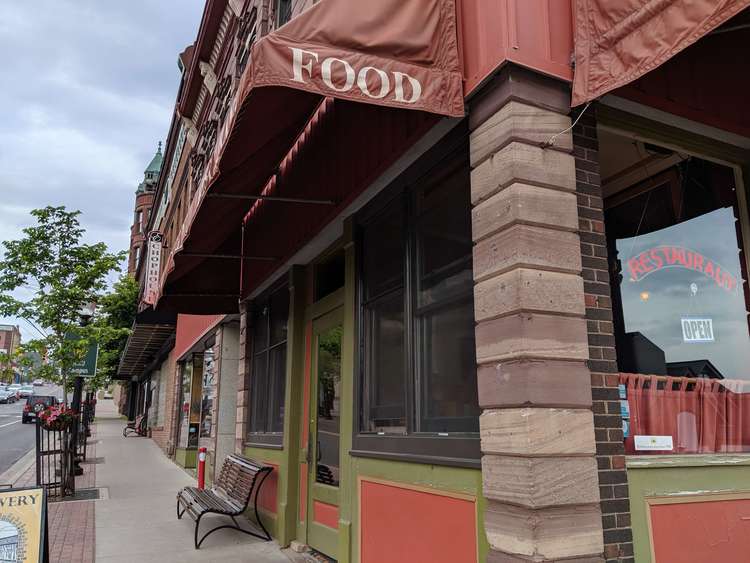 I've been sitting on this review for quite a while now. None of the Tasteem catagories ever seemed quite right for this place. There is one specific dish (which my friend ordered) that I really wanted to highlight.

The "Local Dishes" category fits it perfectly, so here we go!

@mrsbozz, our friends and I had just finished a round of nine holes of golf at one of the local courses in Marquette. I wrote about it here if you want to check it out. We were all getting a bit "hangry"(angry because we were hungry) and decided to head downtown to find a place to eat.

There wasn't anything special that stuck out to us about The Vierling it was just one of the first places we came across as we headed into the downtown area. I parked a short distance away and we walked down the sidewalk to reach it.

The views of the old ore dock were pretty fantastic.

The restaurant itself sits on a corner and really doesn't stand out too much. I feel like we almost walked past the entrance as we were walking down the sidewalk.

The restaurant itself has a very "old world" feel with lots of wood and brick and stained glass. It is also pretty tight and that is part of the reason I didn't get more shots of the interior.

I think they were having a contest to see how many tables they could pack into the back dining area. I constantly had to keep checking to make sure I wasn't elbowing the person at the table behind me.

What little space we had was made up for by the views of the harbor.

Here is another quick shot I took of some of the interior flare. The website for the Vierling actually has an interesting section that covers the history of the establishment. I encourage you to check it out if you are up for some light reading.

Of course we started off with some brews after a long morning of golfing.

I got the Yooper Red Ale

And @mrsbozz got the Blueberry Wheat

They were both very tasty and refreshing.

I didn't get a picture of the menu becuase I thought they would have it on their webpage like most people do. I find it is much easier for you guys to read in that format that it is from some blurry picture I tried to take. Unfortunately, it isn't on their webpage, so I apologize for that.

As I was browsing the menu, I saw they had a Cuban sandwich. I am kind of a sucker for a good Cuban and it was a hard choice between that and their fish and chips but in the end the Cuban won out.

It was good, but probably not the best Cuban I have ever had. The ingredients were fresh and the flavors were on point. The fries were really good and as I recall, all of our food came out within a reasonable amount of time.

@mrsbozz got the Turkey Pesto panini. We couldn't quite read what the "brand" on the top of the buns was from their panini press, but it did give the bread a nice crust and crunch. In her opinon the onion rings were nothing special and the sandwich was better than decent but again nothing Earth shaking.

Her friend got the cajun chicken Po' Boy and was pretty happy with it. By the end she was basically just picking the chicken out of the sandwich. I feel like this picture gives a good representation of how weak the onion rings were. I prefer larger cut rings that actually give you a onion taste when you eat them.

Finally, I am getting to the reason for this post. Our other friend did what I probably should have done and got the Fish and Chips.

The reason I feel like this post fits into the "Local Dishes" category is because of the meal pictured right here. Now, you might say, "isn't fish and chips more of a UK thing?" and you would be right on some level. This is just your ordinary fish and chips though, this is Great Lakes Whitefish fish and chips.

That is what I feel makes it so special. Whitefish is pretty much considered a staple, delicacy, you name it in the Northern parts of Michigan, Minnesota, Wisconsin, and a large portion of Canada. It is a light but flavorful fish that flakes perfectly and in my opinion tastes divine.

Much like salmon, it smokes very well and I have seen all manner of products made from it including cracker spread, pate, and sausage. Nearly every bar/restaurant in the geographic locations I mentioned have at least one appetizer that incorporates Whitefish.

My friend felt his fish was a touch greasy, but from what I could see, it looked fantastic and the only fault I had with the dish is that they only gave him two pieces.

At $35 USD for two beers and our two sandwiches, I kind of feel like it was a bit over priced. Especially given how average the panini's were. Looking back I really wish I had gotten the fish.

I'd still visit the Vierling again, but I would try to get one of the booths up in the bar area and as I said, I would definitely order the whitefish.