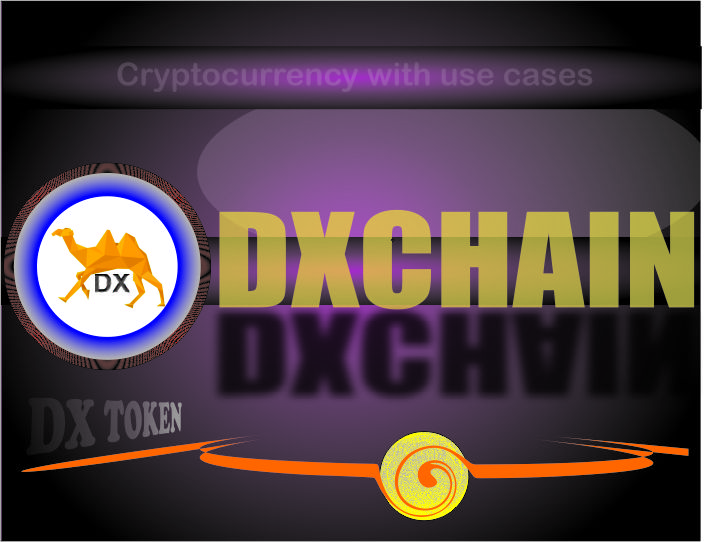 Here I will be taking you through the fourth series of the "Dxchain White Paper Explained". Previous series you can find this SR-1, SR-2, SR-3.

Overtime, Dxchain Project experienced a very considerable growth and it continually seeing the expected development. There are couple of announcements and release over the past weeks, all of which you can find on Dxchain Blog site. In discussion I had with @olivia -member of the Team, it came to my knowings there has been slight changes in the course of executing the whitepaper. This is due to continuous technological advancement together with external factors that might be about change in paradigm. This series is basically to walk you through the avenue at which Dxchain Utility token -DX operates.

DX Token And Its Usage.

What Is A Token?
There is a clear distinction between Blockchain and Cryptocurrency. Blockchain being "a well" where the water takes its source and "crytpocurrency" acting as what you need to fetch out the water in an amount you need for sufficiency. This basically explains the deep relationship between them. They both co-exist where one acting as the platform and another what is built upon it. Blockchain has a distinctive nature which uses a tokenized transactions which are referred to as cryptocurrencies. A cryptocurrency token is a store of asset value, and what asset is being represented varies wildly based on the blockchain. In a vanilla blockchain like Bitcoin, the cryptocurrency BTC represents financial value. In a commodity-backed blockchain like Hempcoin, the cryptocurrency THC represents industrial hemp.

There exist blockchains that use Dual-token system such as NEO/GAS. While NEO serves as the digital security token, GAS's usability is to power tokenized transactions on the NEO network. Ethereum as a blockchain supports development of additional or dual cryptocurrency tokens. Projects like EOS, VeChain, TRON etc started as Ethereum-based tokens before they moved to a self-hosted blockchain. This brings me to differentiating between a TOKEN and a COIN. Ethereum chain supports other coins which is why it has different token protocols referred to as Ethereum Request For Comment (ERC) Standards.Some of the known ERC standards are ERC-20, ERC-223, ERC-721(used for non-fungible crypto collectibles like CryptoKitties) etc
Difference Between A Token And A Coin.
Coins are digital money, created using encryption techniques, that store value over time. Basically it is a digital equivalent of money. The major characteristics of a coin is that: they are fungible, divisible, acceptable, portable, durable and have limited supply. Example of a coin is Bitcoin, LiteCoin, Ripple etc. In contrast, according to the medium article here, Tokens are digital assets, issued by the project, which can be used as a method of payment inside project’s ecosystem, performing similar functions with coins, but the main difference is that it also gives the holder a right to participate in the network. It may perform the functions of digital asset, represent a company’s share, give access to the project’s functional and many more — with the launching of new projects unknown facets of tokens’ functional are discovered. Token-hosting platforms like Ethereum created a divide in crypto in which the term “coin” is used to describe self-hosted cryptocurrencies like Bitcoin, while “token” is used to describe proprietary tokens hosted on third-party blockchains.

What Is DX Token?

According to [Dxchain Whitepaper](), DX is a non-refundable functional utility token which will be used as the unit of exchange between participants on the DxChain Network. The goal of introducing DX is to provide a convenient and secure mode of payment and settlement between participants who interact within the ecosystem on the DxChain Network. DX is an ERC-20 standard compatible token. That is, It is initially created on the Ethereum network and can be stored using wallets with same compatibility.

What Is The Use Of DX Token?

DX is a major component of the ecosystem on the DxChain Network, and is designed to be used solely as the primary token on the network.. The primary usage of DX is for interaction among the participants of DxchainNetwork. For instance, Dxchain being a decentralized storage platform needs a convenient way of sealing transactions for justify the advantage of using the platform for effective cost control using cloud service hence DX will serve the purpose of this.

It will be used a means of incentivizing members of the newtwork. Quoted here, DX is required as virtual crypto “fuel” for using certain designed functions on the DxChain Network, providing the economic incentives which will be consumed to encourage participants to contribute and maintain the ecosystem on the DxChain Network. DX is a vital and integral part of the ecosystem as it serves as a means of incentives to get participants engaged in the network.

DX is also required for the smooth validation and verification of additional blocks on the Dxchain. The providers of such services on the Network would require payment for the consumption of these resources (i.e. ”mining” on the DxChain Network). Lastly. the utility of DX is also to maintain network integrity. It will serve as the unit of exchange to measuring and payment for the costs of the consumed computational resources on the chain.